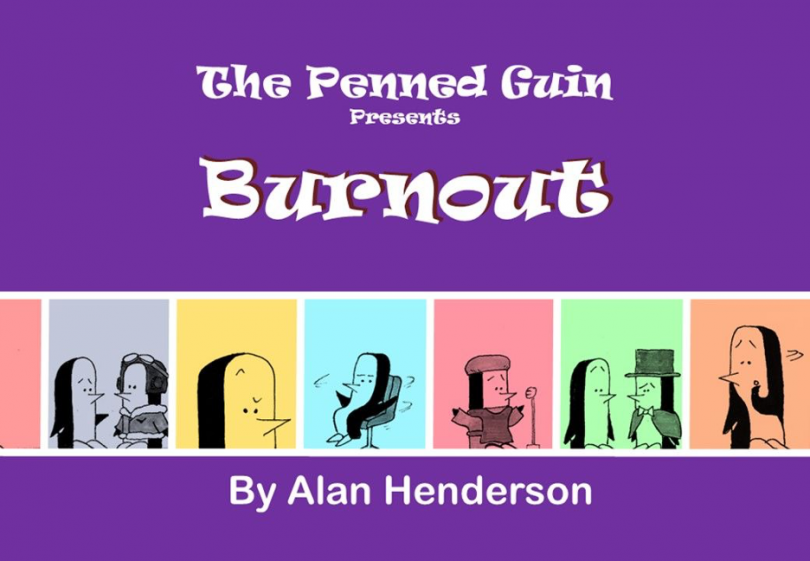 Talk about a comic that’s black and white about its intentions. The Penned Guin brings their humor, puns, cringe, and penguins to printed form in Burnout. Created by Alan Henderson, what began as a daily webcomic has become a beloved franchise in its eighth year running. And it doesn’t seem like the jokes are running away from Henderson anytime soon. I’m doing my best here with the puns, there’s a reason I didn’t write this comic.

Burnout is a collection of over 180 of Henderson’s comic strips that have not been in a printed edition until now. The comic strips detail the quirky interactions between a number of penguins going on about their daily lives. And because of Henderson, I now know more dad jokes than my dad. There are also puns and even parodic pop-culture references. But there are so many jokes in the world, and so much cringe humor, so what makes this collection stand out?

First off this material involves penguins. According to a top comment on debate.org “if u hate penguins die in a volcano or in the cold!” I know that sounds a bit harsh but I don’t make the rules. I’m just the messenger giving the cold hard facts about your fate if you hate penguins. Also, according to my research, much of the hatred towards penguins is due to negative experiences from the online game Club Penguin. First off, there is no empirical evidence that Club Penguin is an accurate representation of the penguin community. Also, as a former player, anyone that gets kicked out of Club Penguin deserves it.

Another effective trait of Burnout is when it comes to comedy, Henderson knows that simplicity is key. I understand comedy is subjective. But there’s a reason why South Park creators Trey Parker and Matt Stone purposely keep their animation underdeveloped. It makes the content even funnier. Some people may find it distracting but I actually find the old animation of Family Guy a lot more comedically effective than the polished product that we have today. And that’s what Burnout accomplishes. Simple, to the point, illustrations of penguins doing and talking about random things. 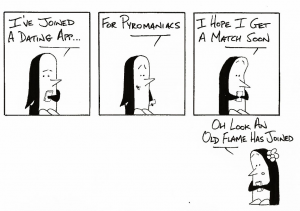 Lastly, Burnout is unapologetic. They know some of their jokes are cringe-worthy and not for everyone. But they have gathered a loyal fanbase throughout the years and you can feel a sense of joy and creativity in the jokes that Henderson conjures up. Personally, I have a soft spot for this kind of humor. Along with my dad, I had a track coach who always motivated our team with corny puns. Even before meets, when I was ready to rip the heads off of my opponents on the oval, he would always say, “remember gentleman, the faster you run, the better time you’ll have.”

Honestly, if you hate dad jokes you don’t deserve to die in a volcano, but please lighten up. Unless you don’t know how to screw in a lightbulb. I’ll stop but definitely check out “Burnout” especially if you’re into the daily cartoons that you’ll see in local newspapers. I don’t know if a lot of my readers are Garfield fans. But if you’re into Garfield definitely give this read. And if you’re not, still read it, unless you hate penguins. And if you hate penguins, you’re free to do that, but hate at your own risk.

If you want more details about Burnout and The Penned Guin franchise you can check the Kickstarter here!  And what are your favorite dad jokes? Give us a good cringe and sound off in the comments or send us your thoughts on Facebook or Twitter!