Home » “Death Kanji” Is A Samurai Journey With A Lovecraftian Twist 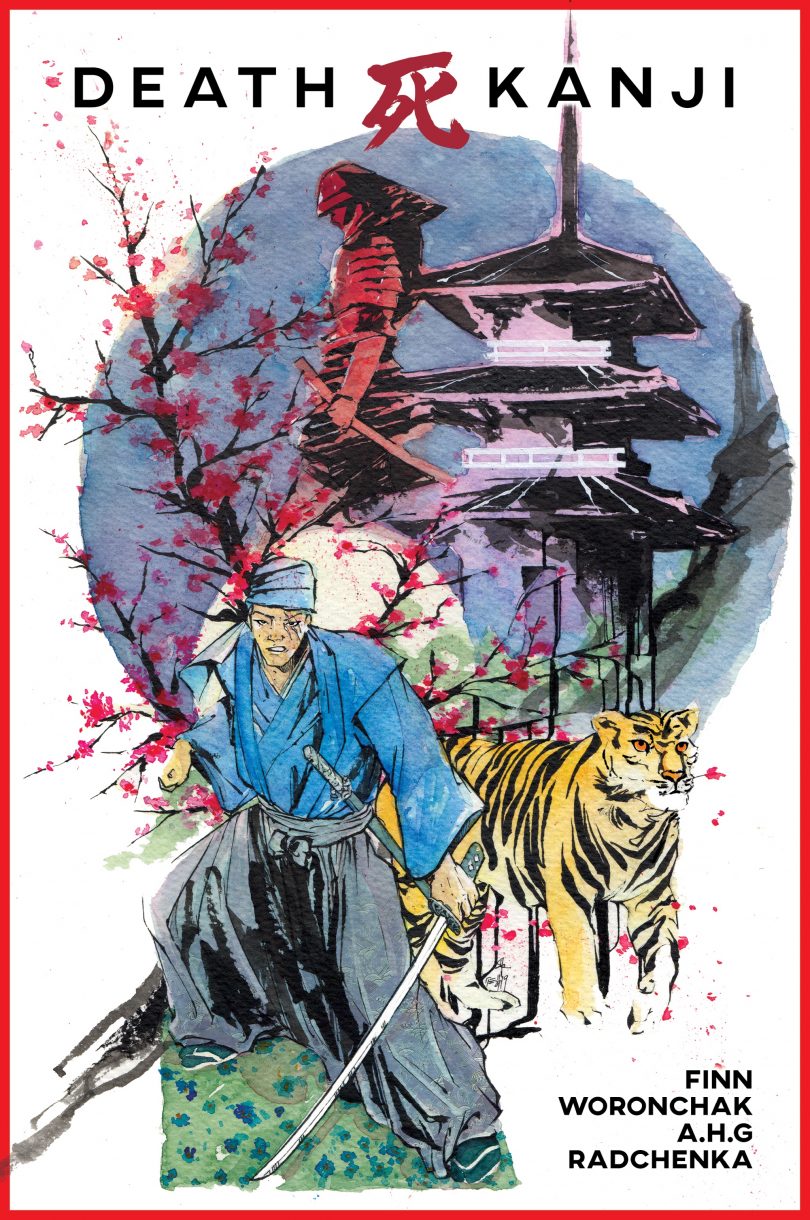 Jordan Finn’s 80-page graphic novel, Death Kanji, is a Lovecraftian Samurai horror drawn in ukiyo-e style. Set in feudal Japan, it follows an unnamed samurai traveling to find his master’s lineage. The samurai’s journey causes him to depart from his position as his master’s protector. This forces him to face not only enemies, beasts and monsters—but also the truth he sets out to find.

Accosted with the murder of the daimyo and the daimyo’s son; Death Kanji kicks off with the samurai kneeling and awaiting his death. As the lord’s wife looks woefully down on the samurai, he seems mournful yet resolved in his decision. The story rewinds back several months to a hunting trip to search for a “demon”. The demon turns out to be a large tiger who then breaks the daimyo’s leg, and runs off. The samurai then tracks the tiger and exchanges slashes with it, slicing it in half. He decides to spare the tiger’s cub – recognizable due to its heterochromatic eyes – as he feels it’s innocent. The samurai’s inaction here will later come to haunt him.

He returns to the castle to find the daimyo and his pregnant wife. Abandoned at birth, the daimyo orders the samurai to find his family lineage; he wishes to give his son the family history he never had. The samurai sets out with nothing but a few gold coins with strange markings. These were left behind by the daimyo’s birth parents. The panels where the samurai travels across Japan are amongst the most visually striking and beautiful. As he searches for truth, he becomes a teacher, a parental-figure, and even a killer of demons. Though nothing can prepare him for the horrors he will later come to find.

Death Kanji is a beautifully drawn story with characters that—while mostly unnamed—are memorable and distinctive. Every piece of dialogue has purpose, clearly defining motivations and relationships. A shining example of these dynamics is between the daimyo, his wife, and the samurai. The daimyo deeply respects the samurai and considers him a friend. The samurai, once a lover of the daimyo’s wife, now serves her husband; there is palpable tension between two. However, we also see clear respect and loyalty from the samurai to the daimyo. These layered relationships and emotions give great depth to the story.

But Death Kanji really shines when the dialogue fades and there is only movement and scenery. There is a distinct lack of words on the page as the samurai travels Japan. When he kills, the silence repeats. As a result, the quiet spurs the beautiful art to speak for itself. The melancholy of the samurai’s journey is sensory; the decision to draw it in traditional ukiyo-e Japanese style allows for wondrous displays of beauty, horror, and sadness. This style choice also assists in storytelling, taking it to a Lovecraftian turn while still remaining grounded in the fact that it is—first and foremost—a samurai story. And it’s a damn good one at that.

If you’re interested and want more information on Death Kanji, checkout its Kickstarter and Jordan Finn’s Twitter. Don’t forget to sound off in the comments and let us know how it goes, or send us your thoughts on Facebook and Twitter!