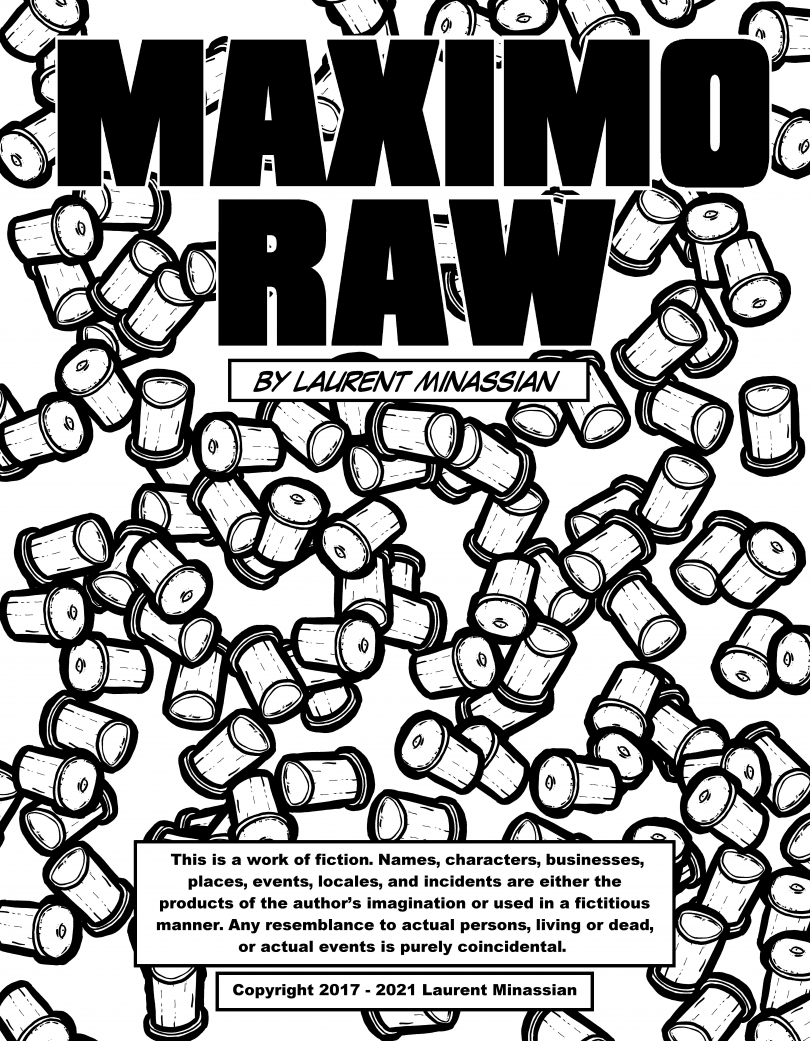 I know I’m the guy that makes way too many movie references. But after reading Laurent Minassian’s book one of Maximo Raw, I couldn’t help but think about Kill Bill Vol. 1. Particularly the scene where the Bride slices through the Crazy 88 at the house of the blue leaves. It is a brutally gory scene almost all in black and white. This is also the case with Maximo Raw. Black and white and bathing in violence. And similar to Quentin Tarantino‘s classic, Maximo Raw carries a very similar theme of revenge. Except in this issue, book one, what we see is the origin story for the very graphic revenge to follow.

What’s very interesting about this issue is the beginning gets right to the point with the revenge storyline. In fact, the first page of the comic gives a brief overview of this series’ overall plot and what to expect.  “Shootouts, sword fights, kung fu style fighting action” involving our main character Maximo Raw. But book one does not include the title character yet. Instead, we get to meet his parents and witness a sequence of events that will lead to Maximo Raw’s thirst for revenge. So the story begins in a crime-ridden city with a 70s aesthetic. I might be 23 but even I know when people say “groovy” what decade we’re probably in.

Anyways, Maximo Raw’s father, Lou Smith has a gambling addiction and has gotten himself deep with the sharks. One day they carve his face. The second part isn’t true, but I had to make that reference. Which you better get. But unable to resist his addiction Lou Smith quickly blows through a thousand dollars at a local casino. And instead of going home, he wants another shot. So he asks his boss, who gave him the previous thousand dollars, Bobby Baccarat, for another thousand. And should he lose again, Lou swears that in return he’ll give Bobby his wife’s wedding ring. 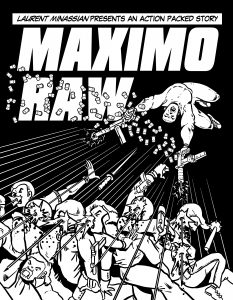 I think we can begin to see where this is heading. Revenge always takes place after tragedy. Lou doesn’t do well, doesn’t have the ring, and now has to skip town as soon as possible. Because Bobby is part of a crime ring that expects all debts to be paid. All hell soon breaks out shortly after as Lou rushes home to his compassionate wife Samantha. We soon get to meet who Bobby works for and what he knows about Lou. And what he knows could be decisive on whether Lou is able to get out of town scotch free. You’ll soon see that Bobby is not someone to be crossed.

This comic is great just from a visual standpoint. The best way to describe Minassian’s illustrations is that they are chaotically brilliant. Even in just black ink, Minassian brings to life the gritty, underground feeling of this city’s gambling halls and crime ring. And the detail shown on every character’s face visually gives the reader a clear picture of their emotional state. This comic is definitely for mature audiences. But, I’d definitely recommend that you give book one of Maximo Raw a read especially so that you, along with me, can anticipate the gory revenge that’s to come.

If you want more details about Maximo Raw you can check on Kickstarter here! Also, what are your favorite comic or cinematic revenge stories? Sound off on both our Twitter and/or Facebook feeds about that and let us know what you thought about Maximo Raw!