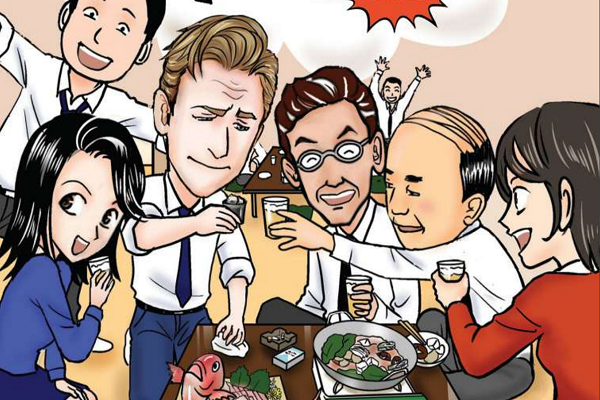 What do you get when you cross an American salaryman with the trials and tribulations of a Japanese workplace? You get some hilarious misunderstandings and new experiences, of course! The Salaryman #1 explores the cultural differences between Americans and Japanese; from interview etiquette, to when and where to nap during the day. The narrative is humorous and lighthearted, but manages to be informative at the same time.

The Salaryman by Michael Howard centers around himself as the protagonist. It’s a memoir about his own experiences living in Japan and the cultural differences he encounters. But the comic structure is like a survival guide. He gives tips and clues on how to survive a busy train ride to work, and how his colleagues taught him appropriate Japanese manners. He’s modest about how sloppy American manners can be, and overall he’s willing to learn new things. It’s a charming perspective amidst his comedic narrative.

What’s even more endearing is Howard’s humility in showcasing his mistakes; he doesn’t act like he knows everything right off the bat. There’s obviously a learning curve with regards to understanding new cultures. Howard voices confusion over his co-worker being able to nap on their desks. He also wonders how they don’t sweat in the office heat. His superior is always around to guide him, and Howard is never angry or rude about his circumstances; he understands that he’s a foreigner and needs time to learn the ropes of the typical Japanese lifestyle. It really makes you want to root for his success!

What’s wonderful about The Salaryman‘s format is that you read it from right to left. This is the traditional structure of a Japanese manga, so it’s nice to see it incorporated into the comic. It definitely takes time to get used to. But after a few pages in, I’m reading naturally from right to left without any issues. But anyone more familiar with manga and anime might have an easier time adapting to this style. Overall, it’s a wonderful aspect to include, especially considering the story’s setting!

The art style itself is fairly simplistic. The characters have chibi proportions, where their heads are much larger than their bodies. One of the little details I noticed is that all of the characters have varied and comedic facial expressions. Howard’s the best example of this; his hair sometimes mimics his emotional state too. Little bits of frizz poke out of his immaculate hairstyle when stressed or confused. Subtle—absolutely—but a very nice touch nonetheless!

The story is also straightforward and easy to digest. As I mentioned before, it’s kind of like a survival guide for living in Japan. The comic is divided into three chapters: the prologue, a survival tip, and the story behind the Tokyo nap. The prologue gives context to Howard being in Japan, and the survival tip is directed more towards the reader. The Tokyo nap story takes up a bulk of this issue, and delves deeper into the characters. Every part is enjoyable in its own way. And having the survival tip in the middle is a nicely-placed break from the bigger picture.

Without too much spoilers, the third chapter is definitely my favorite part. Howard’s struggle to understand the art of the Tokyo nap is both amusing and highly informative. He compares how people nap on the trains to life in America; he’s always so blown away by how easy the other salarymen are able to nap during work. They even manage to nap during business meetings! But after some ups and downs, Howard unintentionally discovers the art of the Tokyo nap on a train ride home. He deserves it after all he went through!

The Salaryman #1 is a quick and endearing read about an American man navigating the Japanese lifestyle. As a memoir, it’s easy to assume that Howard put a lot of love into crafting the narrative. Even if you’re not an American salaryman working in Japan, I recommend this to anyone who enjoys a little bit of slice of life and comedy. At the very least, you’ll find a new appreciation for speed napping.

What did you think about The Salaryman? Have you had similar learning curves with understanding different cultures? If you’re interested in reading more about The Salaryman #1, it’s available to purchase on Comixology. You can also read more about the series on its official website. Let us know what you think in the comments or send us your thoughts on Facebook or Twitter!