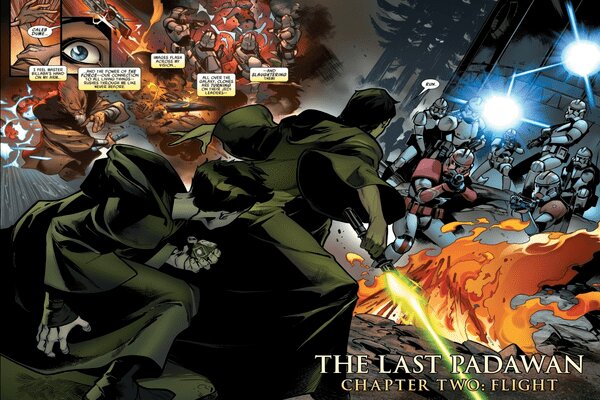 Star Wars has a long and storied history of retconning material, and the new Disney+ series The Bad Batch wasted no time continuing this legacy. With every rerelease of the originals adding or changing the beloved classics, the rise and removal of the Expanded Universe, the prequels, the sequels, the comics, video games, cartoons and novels, characters and storylines have changed so often that altering lore is a Star Wars tradition.

The Bad Batch has a retcon early in its first episode, changing the origin of Star Wars Rebels fan favourite Caleb Dume (aka Kanan Jarrus). So how does the new version compare to the original?

The 75-minute first episode of The Bad Batch opens on the planet Kaller, introducing us to Jedi Master Depa Billaba and her Clone Squadron before being quickly joined by her Padawan, Caleb Dume and the Bad Batch. After seeing the Bad Batch take down a battalion of “Clankers” by themselves, Depa gives Caleb permission to join them for a counterattack.

As Caleb races away, the Clone captain receives the infamous message to “Execute Order 66”. Surrounded by now brainwashed Clones, the “regs” don’t hesitate in firing at her. With her final breath, Depa screams for her Padawan to run, which he obeys, fleeing into the woods.

Hunter and Crosshair chase the terrified Caleb who, after knocking out the now curiously aggressive Crosshair, has a standoff with a confused and anxious Hunter before fleeing into the wilderness, with Hunter misreporting him as having fallen to his death.

While The Bad Batch provides a harrowing look into the effects of Order 66 for both the Jedi and Clones, comic book series Star Wars: Kanan Vol.1: “The Last Padawan”, gives us a darker version of events.

After lifting the Separatist occupation of Kaller and settling down for the night with their squad, Captain Styles and Commander Grey playfully tease the “kid” Padawan as a “troublemaker” when Order 66 arrives. Receiving the Holocron seen in Rebels while reflecting on how much he loved his life, Caleb is grabbed by Depa. Sensing “the power of The Force” rushing though him, he sees visions of Jedi throughout the galaxy being betrayed by Clones.

Freezing in fear, he watches Depa cut down his friends in self-defence before eventually joining his Master. While being surrounded, Depa lies to Caleb, getting him to run with the promise she’d be “right behind” him. As he’s chased into the woods, Captain Styles takes aim at Caleb but Depa sacrifices her defensive stance and distracts him. She’s shot in the back by Commander Grey before being brutally executed by the rest of her Squad. Caleb escapes.

To start, the setting is different, with the battle being over in the comics but in progress in the series. The initially peaceful situation in the comics, with Master, Padawan and Clones together as friends, gives much more weight to the scale of betrayal Caleb feels, and more impact to the reader as a result. One of the biggest strengths of the related Star Wars: The Clone Wars series was the way they portrayed the relationships between Clones and Jedi. The comic does a much better job of showing this than The Bad Batch, largely due to this change. The series, for example, only gives the names of the Bad Batch in the opening scene, so those who don’t know the comic book canon and the close relationship between Jedi and Clones here, will still see the betrayal but it won’t resonate as deeply or feel as personal.

The killing in The Bad Batch is also one sided. Depa disarms a Clone and deflects blaster fire in the series, but in the comics, she doesn’t hesitate to kill and calls for Caleb to do the same. Again, this somewhat lessens the impact, making it much more “family friendly” than the original version of events. However, while the ferocious last stand in the comics adds to the weight of Order 66, we all know how awful it was by now, and a series targeting a more general audience doesn’t really need this level of violence to explain what we already know.

There’s also the key issue of trust and the way it impacts the development of Caleb on his journey to becoming Kanan. While keeping the final order from Depa to “run”, The Bad Batch misses the only lie that the Master had ever told the Padawan. It’s a lie that Caleb used as permission to abandon her, something that causes him guilt and makes it hard for him to trust others. The guilt also makes him feel like a coward, something thrown in his face by the Inquisitor while torturing him for information in Rebels. Although, even with the lie removed, the weight of the Clone’s betrayal in and of itself would be enough to cause trust issues for anyone. So, while it’s a change, it’s a relatively minor one.

Overall, I’m not against the changes. I don’t think Star Wars needs to go as dark in the series as it does in other mediums. Plus, Disney retconned Caleb/Kanan’s origin in The Bad Batch skilfully. They kept the core elements intact while only making minor changes, something Dave Filoni has proven adept at in other Star Wars properties. Things like changing the lightsaber colour of Depa Billaba from green to blue, and the Clone armour from red to green, are superficial and irrelevant. Instead, we get to see a tightly written backstory for a fan favourite character, and there’s nothing wrong with that.

We’re seeing a pattern now of how Disney will handle Star Wars cannon. Comic books and novelisations are going to be less reliable than the movies and TV shows. My concern is that the Disney+ series could get retconned accidentally in the future, with different directors taking over different parts of the Star Wars universe. This could end up turning an already slightly confusing canon into a complete mess.