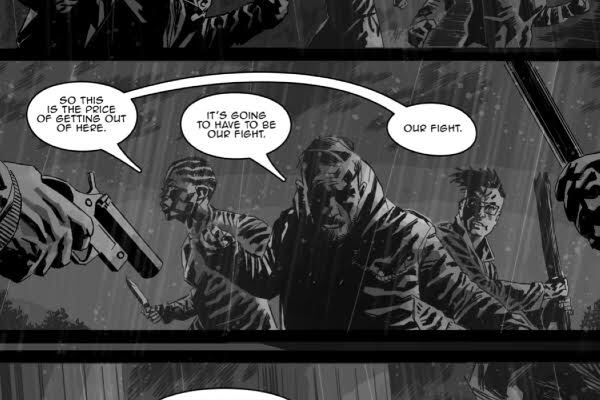 The first two volumes of BOAT – though tense, atmospheric, and gripping – lack a bit of context. Which doesn’t exactly provide scope for readers to see where the greater story is heading. This doesn’t impact my opinion of them as standalones. But still, there remains uncertainty of how the story would conclude. Now, I’m pleased to report that Vol. 3 and Vol. 4 not only keep up the quality of the first two volumes, but amp up the action, drama, and worldbuilding. This is all thanks to the masterful writing of David Lumsden.

The dark and detailed artwork by Mark Olivent is mesmerizing. It captures the dismal world of No Land through lots of darkness and shadows. Every character’s emotion is captured perfectly; they really convey the desperate and harsh state of the world. In addition to that, Vol. 3 and Vol. 4 have a considerable bit more action than the first two. It’s tense, violent, gritty—and most of all, exciting. Drawn clearly with great detail is this action, which makes the physical threats the characters face feel almost uncomfortably real, in the best of ways.

These volumes introduce many new No Lander characters. But the writing is at its best when focusing on the past and present of Charlie, the lone drifter. His story continues to be the heart of these volumes. It’s through him that we experience the post-apocalyptic life of No Land as an outsider. The tragic tale of his past unfold piece by piece; now more so than ever, we see how his past informs the choices Charlie makes now.

The past sections of the volumes – still denoted by “then” versus “now” headings – initially seems tragic. It’s a simple story of a boy and his father struggling to survive in the flooded waste of the world that remains. But these volumes go deeper into the time that lapsed before Charlie’s arrival to No Land. This adds even more interesting characters and threats to the mix. The addition and development of Mr. Stone, a new guardian for Charlie and a personal favorite character, is a testament to how well the writer can quickly endear us to new characters and concepts even through small vignettes of the past.

The “Now” plot focuses more heavily on the other No Landers. Yet still, it’s not quite as strong as Charlie’s personal story. If only because, we get less time devoted to learning about them as individual characters. That isn’t to say that they and the main story are not compelling. Evie, the idealistic and strong-willed No Lander who takes a liking to Charlie, and the gruff No Land leader Rice, are clear stand-outs. These characters let the reader connect to the community’s struggle to survive. The villainous Berlin and his lackeys also make for a powerful presence, alongside the intensifying conflict between the two factions.

The simplicity of BOAT, especially what we see in the first two volumes, is one of its greatest strengths. It allows for wilder and weirder moments, and aspects that hold more weight as things begin to ramp up. Although the end of Vol. 4 reaches a natural and satisfying conclusion, I am pleased to see that Charlie’s open-ended story will continue in Vol. 5. I hope I get the chance to check that one out soon.

Lost in the wonderment of the No Land world of BOAT? Have you read our review of the first two volumes? If you’d like to own the collection for yourself before Vol. 5, you can purchase them all via the creator’s website! Let us know if you’ve read all of BOAT so far through the comments, or on Facebook and Twitter!