Home » The Remarkablz: In Conversation with Katy Alexander 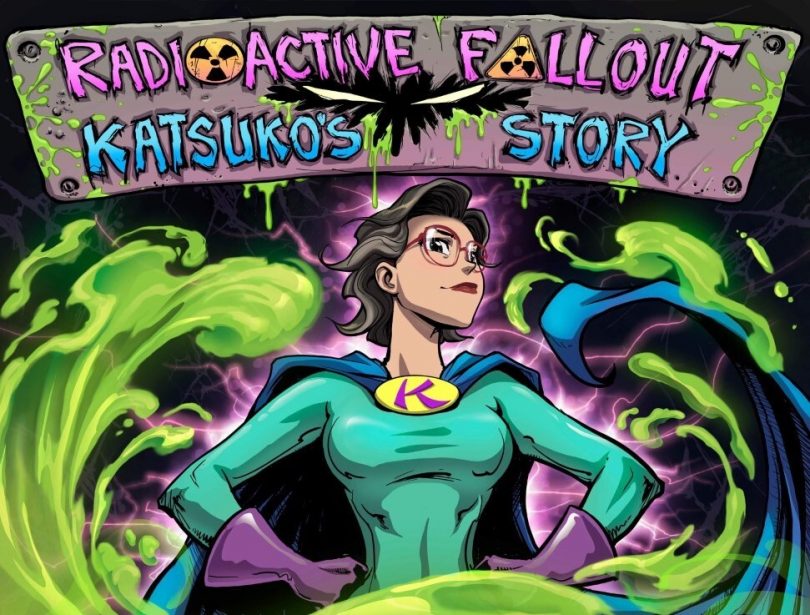 Science communicator and neurodiverse designer Katy Alexander talks to us about her new comic The Remarkablz; a growing collection of edu-games that turn real-life heroes of science into superheroes to inspire children age 6-12. Her new story Radioactive Fallout: Katsuko’s Story draws inspiration from real life people and events, ready to inspire younger audiences to do greater things.

AP2HYC: Why did you choose to base this comic on real people?

Katy Alexander: I created The Remarkablz to inspire the next generation of science superheroes. Positive and diverse role models shape attitudes, ignite aspirations and transform lives.

When my daughter was three, she only ever saw depictions of male astronauts and questioned whether she, as a girl, could go to space. As a person with dyslexia, I grew up with no dyslexic role models, and the impact this had on the choices I made and how I saw my place in the world was enormous. I didn’t want the same for her.

And so I developed The Remarkablz to find role models that my daughter, nieces and nephews could relate to. The people who create rockets, travel through space, discover comets, stop above-ground nuclear testing, are—to me— superhuman, so I turned them into actual superheroes where their real-life superpowers can be celebrated.

KL: The first theme is ‘curiosity and determination’. The story follows four young school-friends who lead seemingly ordinary lives and love to learn and explore. They band together to discover why, when people visit a local beach, they are getting sick. They decide to do something about it, all while discovering how important it is to save the planet around them.

Which brings us on to the second theme: ‘teamwork and collaboration’. You can’t have science without teamwork, so we are making sure this is integral to the story. And finally, ‘imagination and adventures’ are at the core of The Remarkablz – some pure superhero fun and fantasy with exciting adventures, dastardly villains, mysteries and peril.

AP2HYC: I find the messages behind the story really inspiring, what is your mission with these messages?

KL: I am in awe of Dr. Katsuko Saruhashi‘s scientific discoveries, incredible life and positive impact on our world. Radioactive Fallout reimagines Katsuko’s life as a young girl, how she gains her superpowers and comes to join The Remarkablz as one of our science superheroes. I’m excited about blending her real-life story with imagined superhero adventures. The comic book creates an engaging educational tool for parents and teachers wanting to share the huge achievements of diverse scientists, engineers and inventors who have shaped the world in which we live.

KL: I think readers will spot a lot of influences in the style – a mixture of the classic comic book strip (one of my favourites) merged with manga and the dash of superhero silver age. It’s important for us that it is engaging and accessible, so we’ve made sure it uses dyslexia friendly fonts. We also want it to be educational too, so it includes a full biography of Katsuko at the end too.

AP2HYC: I hear this comic evolved from a card game, can you tell us about that?

KL: It did indeed! I developed The Remarkablz concept for our first game called Top Quarkz. It’s a classic ‘Top Trumps’ style game pitting the various powers of our different superheroes against one another, whilst also letting players know about their remarkable real-world achievements. Top Quarkz is aimed at over 8s. For anyone younger, we developed Black Hole which is similar to ‘Old Maid’ – making pairs and avoiding being the player left with the dreaded Black Hole Card. The cards in both games has a matching bio on our website for players to find out even more.

KL: All our energies are going into bringing Katsuko’s story to life at the moment – we’re well on our way to meet our Kickstarter goal, but of course we’d love as many people as possible to get behind the comic book and make it a reality. Saying that, I am continuously creating and sharing fact files about our superheroes, which you can find on our website – this takes up a lot of time, but it’s a blast.

KL: The big things that stand out, are being able to bring Katsuko’s amazing life story to the comic book, intertwining her biographic facts with a superhero fantasy.

I’ve worked very closely with my daughter on the story line which has been wonderful – she’s a harsh critic but the story is all the better for it.

And more than anything, hearing the excitement in kids’ voices when I tell them about the book – I recently spoke to a group of 10 and 11 year olds at a school in the States, they were so excited about the comic book, it truly energised me!

And of course all the support we’ve had so far from people getting in touch with us and backing Radioactive Fallout: Katsuko’s Story on Kickstarter.

Alexander’s comics not only draws upon those real people that contributed to the world we live in, but offers positive role models for the younger audience to relate to and aspire to be like. Kudos to Katy Alexander for thinking up this radioactive storm! If you miss the Kickstarter, you can check out their socials at The Remarkablz Twitter, Instagram and Facebook. Have you supported The Remarkablz yet? What do you think of the way Katy Alexander as drawn upon real people? Sound off in the comments or send us your thoughts on Twitter!