Home » “He Bear Hugged a Man to Death”: Meet Cuddles! 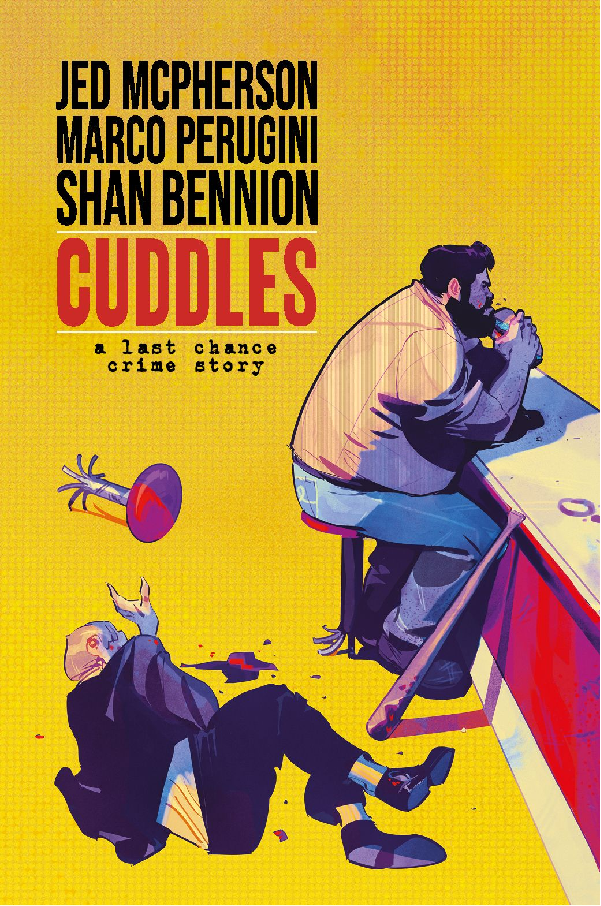 Meet Cuddles, a larger than life guy with a larger than life attitude. After partnering up with Jacko, the local crime boss’s son, things start to take a turn for the worse. Without giving away anything major, it gets intense. His partner is skimming off the top. His boss won’t get off his back. To top it all off, he is being tailed by two “eff bee fucking aye” agents.

Written by Jed McPherson, illustrated by Marco Perugini and coloured by Shan Bennion, this comic comes to life as you read it. What I love about this comic is you start right in the heart of the action. We meet Cuddles and Jacko during a job, which I think lets you get a better sense of who they are as the plot develops. We’ve had no formal introduction to either of them, but I think that pays off as the comic goes on. Their conversations are natural and comedic at the most unexpected times, cutting through any scene which might threaten to be a bit too extreme, making this comic effortless to read.

Cuddles finds out that Jacko has been skimming money off the top and has been ordered to take care of the situation. We all know what that means. During the altercation, Cuddles discovers that Jacko has been feeding information to two “eff bee fucking aye” agents who have been building a case against the Turk. When Cuddles ambushes these agents in a diner, we start to doubt our opinion of him. It seems he’s more interested in making a deal for himself than anything else. He’s “taken care of” Jacko, and now he wants to make sure he can get off scot free.

Throughout, we can see how complex and evolved Cuddles is as a character. He is a criminal, we know that. We are aware of what he has done and he lets us know what he is capable of. However, he battles with his inner consciousness throughout the whole comic, continually trying to make the right decisions for everyone involved. Although some of the decisions he makes are a little warped, he’s doing them to survive as a debt collector for the Turk. Who are we to question him about how he pays his bills?

The art in itself throughout the comic is something to be admired. It adds an extra dimension to the already complex and gripping story. Think classic comic illustration. Perfect for this old school crime boss story. The violence comes to life on every page. The way that Bennion uses pops of red to highlight this is genius. It feels like the rage is radiating from Cuddles in some panels, particularly towards the end of chapter four as he is towering over a terrified Jacko.

Overall, I loved this comic. I think it is the perfect start to an action-packed plot that can only get more exciting. This comic is definitely suited for more mature audiences but I can’t wait to see how the character and plot develops. Will Cuddles get the deal he wants? What will happen to Jacko now? I don’t know, and truth is, I can’t wait to find out! Make sure you read the first issue of Cuddles: A Last Chance Crime Story!