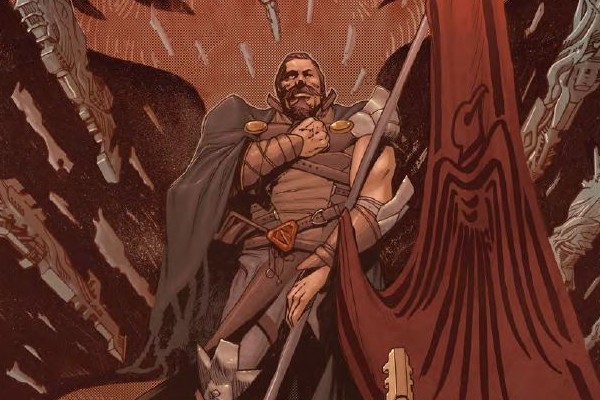 It’s very interesting how certain subgenres arise in pop culture all of a sudden. Whether it’s campy slashers in the early 1980s or the teen dystopian genre throughout the early 2010s, some of these trends last longer than others. Now, with the emergence of shows like Ragnarok, Vikings, and Loki, along with the MCU in general, we are seeing Norse mythology take a more popular role in the mainstream. And The Jötunn War is a welcomed addition to this subgenre. Which is already better than the teen dystopian genre. By a lot. No offense Hunger Games, 1 and 2 were very good films.

Anyways, Ian Stuart Sharpe‘s four-issue graphic novel has a little bit of everything in the imperialistic Vikingverse. Alongside Sharpe are Ger Curti, Paul Little, Ed Dukeshire, and Alana Joli Abbot. The four of them, in that order, take on the roles of illustrator, colorist, letterer, and editor. In addition, Outland Entertainment acts as publisher for The Jötunn War and oversees the novel’s art direction. And it’s definitely not surprising that so many hands went into this project that brings Norse mythology into a new, science-fiction world. 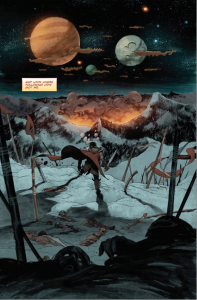 Just a little note on Sharpe’s Vikingverse in The Jötunn War, which he has used for past graphic novels as well. This universe extends to nine home worlds as each planet fights amid an uncertain future with Ragnorak on the horizon. For fans of the MCU, no, this is not a giant animated Surtur sticking a sword through Asgard. It’s a universal conflict amongst the Gods that is seen as the end of times. This battle is somewhat similar to the conflicts portrayed in apocalyptic Christian literature. But anyway, let’s get to the conflict at hand, The Jötunn War.

This universal war begins amidst the Norse conquest across the galaxy. This leads to rebels, as a last resort, seeking the help of a being known as the “roarer”. The roarer leads and controls the Jötunheimr, nightmarish giants who are the primary villains throughout Sharpe’s text. However, the roarer instead of being a savior to the rebels is a false prophet and brings about a conflict that resembles the Ragnarok legends told throughout this universe. And in response to these attacks, by the end, we see how far the Norse are willing to go to protect themselves.

All throughout The Jötunn War, we follow groups of Norse soldiers. Some with ties to the roarer himself with revenge on their mind. And others who don’t even know exactly what they are fighting for. That’s a theme that sounds very familiar! Towards the end we also see sympathetic depictions of the monsters that we grow to hate throughout the graphic novel. Idunn Lind and the Verdandi are examples of how people or entities can be corrupted out of desperation. This war is intersectional and pits sides with little reason for conflict against each other. Creating enemies out of worlds and societies that barely even know one another.

Overall, I will say that there are a lot of characters in Sharpe’s work and it doesn’t necessarily hurt to have a bit of prior knowledge about Norse mythology going in. Additionally, The Jötunn War is very much a read it in one sitting text, with its multi-layered plot. Which is perfectly fine, cause the series isn’t exactly a long one. Even though I would suggest taking your time as that makes it easier to pick up on Sharpe’s easter eggs throughout. The terrific illustrations also are another reason to enjoy this graphic novel slowly. But, if you’re into a brand new take on Norse mythology that also adds a good amount of science-fiction into its plot look no further than The Jötunn War. As well as the various other texts from this Vikingverse.