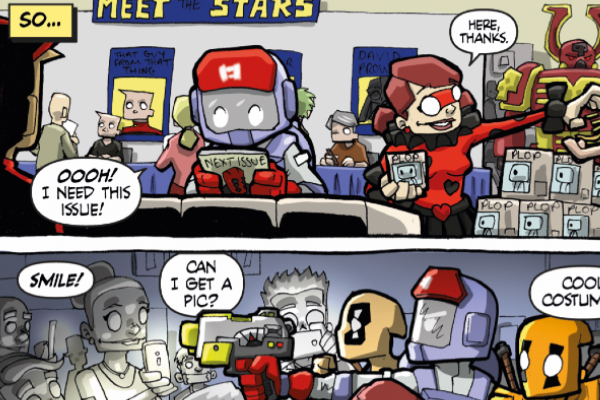 From Attic Studios and creator Dan Harris, The Cosplayer that Doomed the Earth is a fun and flashy love-letter to pop-culture and fandom. We follow Griff, a young man who has finally finished making a cosplay of his favorite character; Captain Aequitas, the titular star of a classic video game from his childhood. He heads to a con, dressed as his hero and ready to show off his work, but things get weird when a spacecraft makes an unexpected visit. Griff’s cosplay seems to be a bit too good, as the hostile aliens mistake him for the real Captain Aequitas. Before long, Griff is swept up into a galactic adventure that turns out to be far more daunting than a simple day at a con.

Dan Harris’s art is very stylized and pleasing to look at, perfectly fitting the tone of the comic. It evokes comics and cartoons of the early 2000s, with the poses and faces of characters being expressive and exaggerated. At the same time, the world of The Cosplayer that Doomed the Earth is full of detail and color, especially in its creative sci-fi elements. The designs of the characters capture a sense of nostalgia for a simpler time of cartoonish sci-fi fun; Griff looks both cool and just adorable in his Captain Aequitas cosplay, like a combination of Mega Man and Master Chief.

The comedy  of The Cosplayer is truly hilarious, full of both dark and whimsical humor. It parodies nerd culture while also embracing it; with a clear love and appreciation for the media, tropes, and people who enjoy them that it is riffing on. The series is packed full of references and call-backs to video games, comics, and general nerdy culture through time. So spotting these details and feeling this strong sense of familiarity from the comic as I read was a treat.

Along with the humor and zaniness is the start of a genuinely engaging story, with not only an intriguing premise but a really likeable and loveable character. Griff may be a simple guy, but he is passionate about his interests and very relatable. It’s this aspect of him, combined with his superfan-level status of Captain Aequitas, that creates a really fun dynamic. He is familiar with this new world he’s in, but powerless to the very real dangers he knows are coming. This makes the story a fun twist of mistaken identity and fish-out-of-water narratives, as well as a tale of “don’t meet (or become) your heroes.”

For a fun romp through space with Griff and company, check out The Cosplayer that Doomed the Earth, and support the series on Kickstarter! What’s the greatest cosplay you’ve ever pulled off? Sound off in the comments or send us your thoughts on Facebook or Twitter!