Home » “Cruella” by Name, Not by Nature? 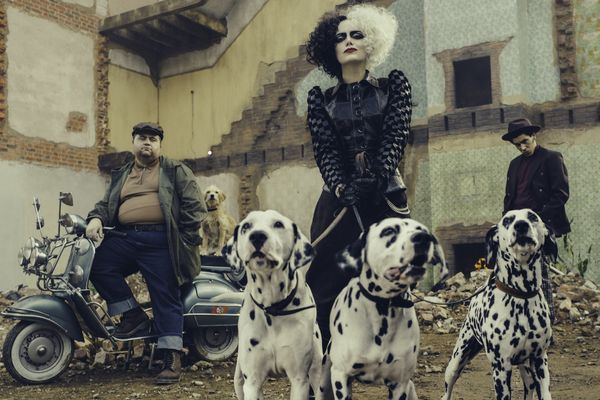 Since her on-screen debut in One Hundred and One Dalmatians (1961), Cruella de Vil has been one of Disney’s most memorable villains. With her grandiose accent, cigarette holder and fur coat, she makes her presence felt, “Daaarling”.

Following the recent trend of movies that paint classic villains as antiheroes, director Craig Gillespie‘s Cruella goes back to her childhood. I was intrigued to see how the film would try and humanise her. Personally, I always found her too cruel and I usually love a villain! The film blends elements from the book, animated movie and 1996 live action film while discarding others.

While some fans of the villain may dislike the changes, I really enjoyed this 1970s punk rock take on the character.

It’s possible that this younger version of Cruella is closer to what Disney had originally imagined for the 1961 film. In Dodie Smith‘s novel The Hundred and One Dalmatians, Cruella appeared younger and more beautiful, and she and Anita were classmates. Even though this is mentioned by Roger, the way she is illustrated as well as Betty Lou Gerson‘s voice acting suggest that she is much older. There are even some concept art sketches by animator Marc Davis which suggest that Disney planned a more youthful appearance for Cruella.

Emma Stone plays Estella Miller, an aspiring young fashion designer who creates the persona Cruella de Vil. Here, the character is portrayed more sympathetically; a creative and rebellious soul who puts in the hard work to achieve her goals. Due to Disney’s ban on it, Cruella no longer smokes.

Gone too, is her bloodlust for fur. She even has a dog named Buddy who she’s cared for since childhood. These are perhaps some of the most controversial changes but for me, they work. After all, would we really root for a main character who wanted to kill cute puppies? You can’t put an antihero spin on that one! Instead, Cruella’s main goal is avenging her mother’s tragic death.

Some of the character’s trademark manic energy from earlier adaptations still shines through in Cruella. My favourite example is a scene where she speeds down the road in a stolen car; Stone’s facial expressions were on point.

One of the best aspects of the film was the relationship between Stone’s Estella/Cruella and Emma Thompson‘s Baroness von Hellman. Both were perfect choices, in my opinion. The Baroness has a huge influence on Estella’s journey, serving as a mentor and eventual enemy.

Both the script and Thompson’s portrayal gave a nod to Glenn Close‘s performance as Cruella in 101 Dalmatians (1996). The Baroness shows a lot of her classic attributes such as her disdain for employees and violent tendencies. This allowed the film to give the audience the villainous behaviour they were expecting while making Cruella herself a more likeable figure. Both characters look the part; Jenny Beavan‘s costume designs in this film are incredible, and a key part of some of the most memorable scenes.

Estella’s first public appearance as Cruella was so much fun to watch! She and the Baroness verbally spar, smirking and glancing at each other. It was obvious how much Stone was enjoying the role and it was infectious! Cruella’s publicity stunts to upstage the Baroness were wildly entertaining.

If I had to change only one thing about Cruella, I admit I was hopeful for a cameo by Close. With a planned sequel confirmed, who knows what might happen!

Have you seen Cruella? Which Disney villain do you think deserves their own movie next? Sound off in the comments or send us your thoughts on Facebook or Twitter!