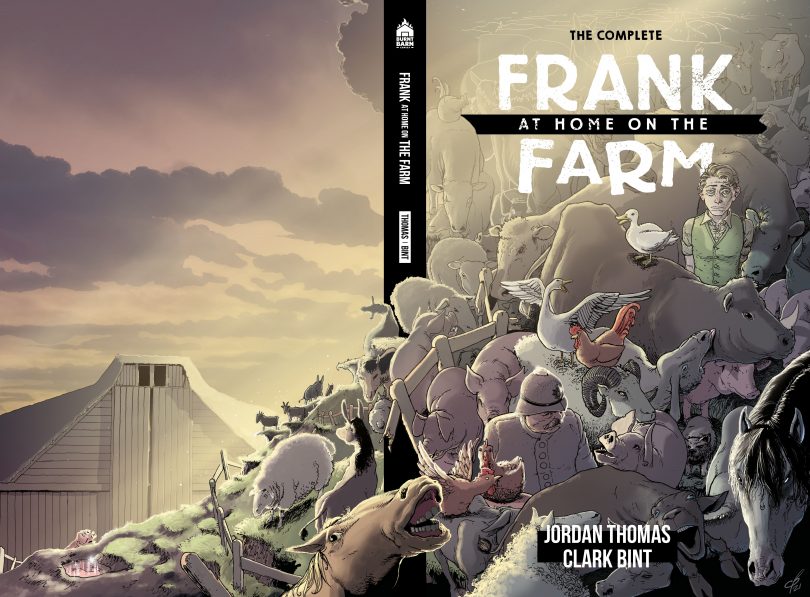 The critically acclaimed horror series Frank at Home on the Farm is back with a special version of the book that includes the oversized hardcover collection and Frank: The Movie.

The first frame of Frank at Home on the Farm, the graphic novel written by Jordan Thomas, illustrated by Clark Bint, lettered by LetterSquids, and composed by John Vallely, straightaway walks its readers towards a complex, horror-mystery tale about a soldier who has recently returned from the trenches of the First World War. For the most part, the comic revolves around one big puzzle, “Where did Frank’s family disappear to,” but still deflects suspicious energy on the big question. This dark suspicion relates greatly to the post-war emotions of the protagonist of Frank at Home on the Farm, but Thomas writes with deep empathy that’s likely to cause readers to hold any such thought. Moreover, the wild illustrations of Bint with the equally terrifying yet emotional music of Vallely also adds flavor to the vague tension.

Frank at Home on the Farm follows the story of a soldier named Frank Cross, who wished to be embraced by his family upon his return from the war. But instead, he is threatened into a mysterious ride of uncovering the truth about the disappearance of his whole family. Gripped by fear, Frank enquires about his missing family to nearby farms but, instead, he is introduced to a series of unusual events that forces him to question every person he ever met during the arduous search. In the final frames of the first edition, strange affairs start to occur around Frank, and the readers are left with a cryptic ending.

Instead of unraveling the secrets about his family’s disappearance and talking more about the occurrence of strange events, Jordan Thomas introduces three more characters in the second edition- an old man taking care of his senile wife and a talking pig. Frank, on the other hand, revisits the horrors of the First World War in his nightmares where his enemies show up with pigs’ faces, and these horrors later mess with his reality. Towards the end, his imagination soars high where a pig from his farm communicates to his pain.

“We should protect ourselves from the outsiders,” a pig talks to Frank, and soon, other cattle also join the conversation. Frank now can’t tell the difference between imagination and reality. He pursues a dangerous mission during this façade, or you could say, voices inside his head provoke him to take some murderous actions. The third edition carefully warns the readers to perceive the story upon their wishes. Either see it as a post-war dramatic episode played by a soldier, or maybe, the reality is as it is shown in the illustrations. The writer plays with the reader’s minds via this edition and asks them to absorb Frank’s anxiety. And the readers could only feed their anxiety some peace through the fourth and the last edition. With the beautiful artistic capacity of Bint, Thomas hid the mystery till the end and would make an impression on his readers. If the alluring art isn’t compelling enough, the hardcover edition includes a QR link to Frank: The Movie. This digital version of the graphic novel has an original soundtrack by Vallely. The beautiful music intensifies the suspense and adds a film dynamic to the reading experience.


While Frank at home on the Farm impressively creates the horror-mystery genre out of post-war trauma, there was still one flaw in the story. The writer gave the big puzzling question a three-part edition but fell short in describing the story behind the Franks’s family accident. The story could benefit from at least four to five frames dedicated to explaining the tragedy that Frank’s family went through. And also, Albert’s character felt a more generic plot move than a fully realized part of the novel. If only there could be more written about Albert, and the mystery that Albert spoke of, then the novel would have beautifully explained every character’s presence.

To summarize, the horror-mystery genre attempted by the writer is at its most potent because it teaches its audience about the post-war demons. Frank at Home on the Farm does both- encourages the readers to accept the reality about mental health, and pushes us to confront our own demons.

If Frank at Home on the Farm has created enough suspense for you, then be sure to check its Kickstarter for more information and exciting add-ons! Let us know about your experience in the comment section or send us your thoughts on Facebook or Twitter!