Home » “Marguerite vs the Occupation”: In Conversation with John Luzar 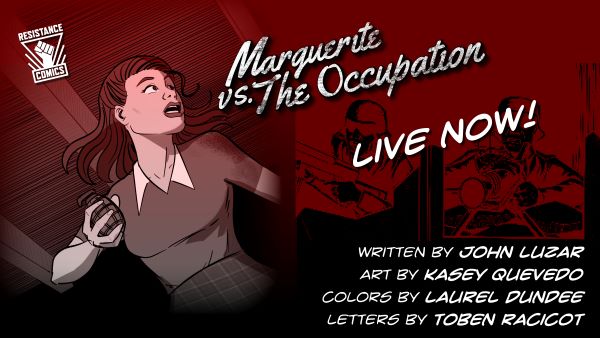 John Luzar’s past comics have been filled with political overtones and Marguerite vs the Occupation is no exception. This comic is an action-packed story with a call for resistance! It was written by Luzar, penciled and inked by Kasey Quevedo, colored by Laurel Dundee, lettered by Toben Rocicot, and edited by Jason A. Fleece.

We reached out to Luzar to unpack this exciting comic and his experience with storytelling.

AP2HYC: What is Marguerite vs the Occupation all about?

John Luzar: So, towards the end of WWII, a young woman returns to the home she fled when France fell. She’s sneaking through the woods where she played as a child, because she wants to see the liberation with her own eyes. Instead she finds that the Germans have set up a machine gun nest not just in her house, but in her very childhood bedroom.

AP2HYC: I understand that you wrote this comic during the U.S. presidential transition period. What was the inspiration for this comic and why did you decide to set the story during the WWII French Occupation?

JL: First off, honestly, the real starting point for the script was my need to figure out how to write an action scene, because I hadn’t done one yet, and I know I’m not going to get very far in comics without figuring ‘em out.

So I thought about a protagonist crossing some sort of no-man’s land during wartime; figured that’d be a good set-up, opportunities for obstacles and conflict and such.

Originally it was a sci-fi thing, set on an alien planet and all that, but yeah, a little while after the election, I was watching The Third Man, and that setting, with the whole weary, picking-up-the-pieces-in-the-aftermath-of-evil vibe… it kind of resonated. For some reason.

That led to stumbling across the idea of the gun in the bedroom, and everything got built out from there. The French countryside made sense as a setting, and then I got excited about the Resistance element, yeah, because it fit so well with Resistance Comics, but also those were some tough fuckers who lived hard, dangerous lives, y’know? Because the fight was worth it.

AP2HYC: How did you start collaborating with your creative team?

JL: Since we’re just starting out, we’ve been finding collaborators on social media, just searching through various hashtags and comment threads for artists seeking work. I sit down with Jason (Fleece, our editor), and we look through a bunch of websites and portfolios, trying to find the right fit. It can be tough when you’re making these first books, finding folks who’re willing to take a chance on you, but I think we really hit the jackpot with this particular team.

AP2HYC: What style do Kasey Quevedo and Laurel Dundee bring to the comic?

JL: Kasey’s ability to work in different styles is actually what drew us to him in the first place. We wanted something basically realistic, but just a little bit heightened. On Kasey’s website, you can see he’s comfortable with naturalism, but he’s also played around with a cartoonier style, too. And then he’s a rock solid storyteller underneath that, so yeah, we got really lucky.

As for Laurel, well, when I found her site, the work was immediately striking, just so rich and beautiful, and then on her “about” page, she says, “In my illustrations and comics, I strive to recapture how I felt in the woods when I was younger: the sense of wonder, the certainty that magic existed there, and the fierce love for those spaces that inspired a need to keep them safe.”

… and like, that’s EXACTLY the story we’re telling with MvO. And sure enough when the colored pages started rolling in, all these locations… they kind of ache, y’know?

JL: Home. Home as something worth fighting for, no matter how badly somebody else has damaged it.

AP2HYC: After writing The Worth and the Cost and Mine was there anything you did differently when creating Marguerite vs the Occupation?

JL: Oh yeah. I wrote the script for this one Marvel-style, actually. Partially because I was looking for a more collaborative experience than I’d had working full script, and partially to force myself to stop trying to write the story with dialogue and captions, to let the pictures carry the weight. I spent most of life working in theatre, so dialogue is always my first instinct, and I need to break that habit sooner rather than letter.

AP2HYC: What is your creative process?

JL: Still figuring that out as I go, honestly. When it comes to the actual scripting, I use the structure I picked up in classes at Comics Experience; it’s been really useful for that moment you’re facing down the Blank White Page… but everything else is still very much a learning process.

AP2HYC: What had been the most rewarding thing about bringing this comic to life?

JL: Feels like I’m learning from past mistakes and getting better, which is always nice. Mostly I just found the collaborative process on this one much deeper, and therefore much more fun and fulfilling.

AP2HYC: Where does Marguerite vs the Occupation go from here?

JL: Hmmmm. This was always intended as just a one-shot, but a couple folks have mentioned they wouldn’t mind seeing more of Marguerite… so who knows? I’d have to talk to the rest of the crew, but I certainly wouldn’t mind offing a few more Nazis…

AP2HYC: Do you have any projects you are working on?

JL: Yes! We’ve got one more one-shot we’ll be launching on Kickstarter in a few months, something totally different and very fun. Then we’re looking to graduate to some longer projects in 2022 and beyond… onwards and upwards, right?

Marguerite vs the Occupation is perfect for readers who enjoy overt political themes alongside exciting storytelling. For more information on this French Occupation story, be sure to check out the Kickstarter page! Sound off in the comments or send us your thoughts on Facebook or Twitter!