Home » Why You Need to Watch/Read Assassination Classroom 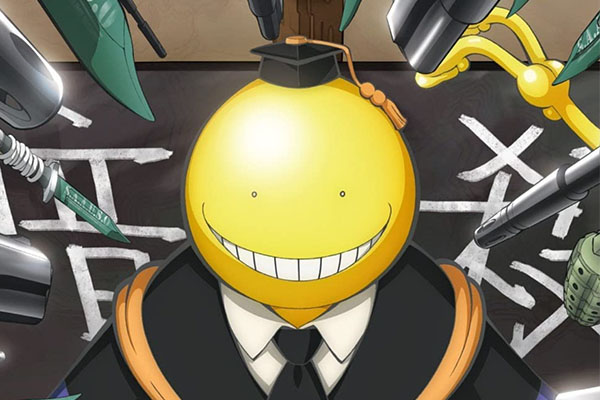 When people have asked me over the years “what anime should I watch next?”, I’ve struggled to give an answer because I like to recommend something I think they’ll enjoy. But then I came across Assassination Classroom. It blew me away with the narrative, large cast and plot twists. If you want to get into anime or manga this is the perfect series for any beginner, especially if you’re into sci-fi fantasy, this is the one for you.

Set in Class 3-E of Kunugigaoka Junior High School, the students must kill their homeroom teacher, a yellow tentacle organism named Korosensei. The student that successfully kills him will be rewarded ¥10 billion, if they fail the world will be destroyed.

This may seem like a typical action-adventure anime/manga but the series really leans on its sci-fi comedy aspect. As the series progresses the comedy aspect is downplayed, allowing the serious moments to have the impact that they need. This elevates the series, giving the audience some variety which helps makes the narrative more than a run of the mill story.

Since the series is set in a class, you may be worried about forgetting characters. Don’t worry, since the character designs are easy to distinguish from each other. The author, Yūsei Matsui, did an incredible job writing the characters, allowing the audience to tell the characters apart easily. Most characters have unique traits that will set them apart without giving them all varied speech patterns, which is nice. While not all characters get a full arc, the ones that do have been well written, so much so that you’ll feel a spectrum of emotions as the series progresses.

Korosensei is the most lovable teacher ever written. As the series went on, I struggled with the concept that he must be killed before the end of the school year. He doesn’t hold any ill will towards his students, which adds mystery to why he plans to blow up the earth. His backstory is one tragedy that really flushes out his intentions as a teacher. It even causes a civil war among his students about how they should proceed.

Matsui really knew what kind of narrative he wanted to craft. He doesn’t shy away from certain subject matters that come later on in the series with arcs that have darker tones compared to earlier ones. This really helps the narrative feel more well rounded than your typical shonen titles like Bleach, Naruto or Fairy Tail. The subjects are handled with a great deal of care, which is a nice refresher in a series that does lean on comedy a lot more compared to other titles.

If you question whether to read the manga or watch the anime, the answer is either. The anime is a straight adaption of the manga. This means there aren’t any filler arcs. However, the physical copies of the manga come with bonus pages and each volume ends with a page of Tentacle Zen. I don’t know how to describe this other than it’s Korosensei’s revised version of famous quotes.

Regardless of how you decide to digest this story, I would highly recommend avoiding any serious spoilers. It will ruin your first experience of the narrative, which will dilute the morals and ethics of the series. This way you can feel the true emotional impact of the story.

The manga is currently available on the Shonen Jump App with a subscription and the anime is available on Funimation’s streaming service.

Have you watched Assassination Classroom? What are some of your favourite anime? Let us know in the comments below or on Twitter!