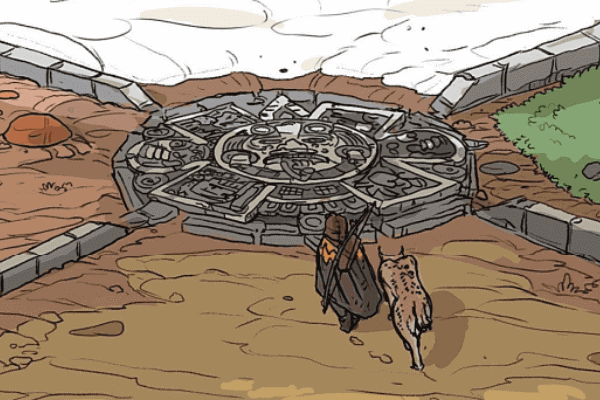 The First Calendar is a charming web comic; very much a passion project with lots of attention given to each panel. The comic explores a fantasy world influenced by deities representing each month of the year. This allows for distinct personalities to shine through, leaving you wanting more. Some parts may at first seem confusing. But the story rewards multiple readings and serves as an engaging introduction to its characters and world design.

Created by Levi Synder and Zeno Colangelo, The First Calendar follows a huntsman. He interacts with the various deities in the world of Calendaria to track down a dangerous entity. Named after months of the year, each chapter references and introduces its corresponding deity in the following pages. There is clear history between each of them; their clashing personalities make for the most interesting conversations, often more so than the main character. Conflicts between the bickering deities draw the hunter further into the fray. Forced to confront a mistake from his past, he traverses Calendaria.

The world building is the highlight of this series. Which is appropriate as most of the characters in The First Calendar are deeply intertwined with its past history and current events. These are the deities that embody each month of the year. Having them feel larger than life, and showing how they’ve influenced their surroundings, is the perfect way to explore Calendaria. For example, December is festive and regularly surrounded by banquets and parties. Meanwhile, June leads a group of colourful desert-dwellers.

In contrast, the main character Ivel, often finds himself overshadowed by everything happening around him. The plot mainly focuses on his perspective. Yet it remains limited by the need to introduce a new deity in every chapter. Ivel’s backstory is definitely compelling. But it arrives late after many chapters of learning about him through his interactions with more interesting characters.

Colangelo’s art for The First Calendar is where most of its appeal comes from. He brings to life many different landscapes, creatures and characters. Every page is vibrant and colourful, utilising different panel layouts to ensure variety. Deserts, cities, jungles and snowy forests all have their own visual style. This helps with jumping between multiple locations. Distinct word balloons for each character assist the large cast so it is easy to follow along.

The only improvement I would have to say are the face designs. They tend to change regularly and sometimes appear messy when compared to how clean everything else is. This might be associated with the unique art style. But it is nevertheless distracting at times. Otherwise, Colangelo is a big reason as to why The First Calendar is so enjoyable to read. The web comic format ensures his designs continually immerse readers into the world of Calendaria.

The First Calendar is a great example of why web comics work so well as a platform for modern storytelling; they are not limited by the number or size of pages. Each of the the twelve chapters can be printed as their own separate issue. Still, it’s enjoyable enough to have the full story available to read in one sitting. This is also beneficial for multiple readings.

I highly recommend rereading the web comic several times to fully understand the events from a wider perspective post its first completion. Character motives become clearer; Calendaria becomes familiar after seeing so much of it by the end. The website in itself offers a unique experience through the outside commentary of the omniscient narrator. This enhances the story further by incorporating how online authors can comment on each post into the world building as an extra layer.

Overall, it’s clear that lots of passion and creativity has been put into The First Calendar, making it an enjoyable read. It introduces a wide fantasy world with ties to our own. The powerful deities within it each have their own distinct design and personality.

Have you read The First Calendar yet? Who was your favourite god from the twelve months? With future instalments promised, be sure to visit their website and read the webcomic for free so you can experience the world of Calendaria for yourself. After that, be sure to check us out over on Twitter!