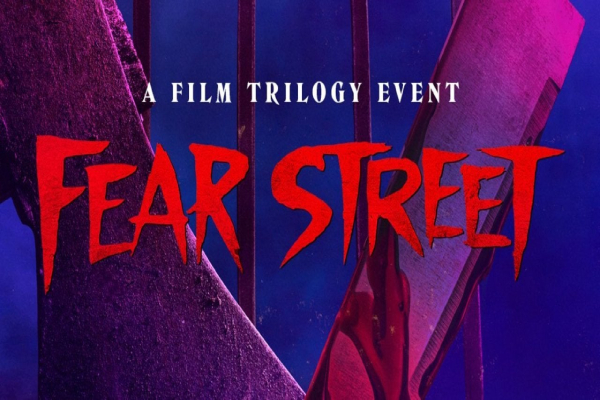 A surprise hit that everyone has been talking about, The Fear Street Trilogy, seemed to pop up from nowhere. I saw an advert for it on Instagram a few days before the release of Part One: 1994 and thought it sounded right up my street. For the most part, it was! I will preface by saying I’m more of a fan of the suspense in horror and not the gore.

The Fear Street Trilogy is based on the book series of the same name by R. L. Stine. Although I was familiar with his Goosebumps books, this was my first introduction to this franchise. Told over a series of films released in weekly instalments, it features a connecting story set in three different eras; 1994, 1978 and 1666. Layers of the story unfold each time, adding context before jumping back to the 90s. What ties them all together? The local legend of the witch Sarah Fier’s curse on the town of Shadyside.

Director and co-writer Leigh Janiak pays homage to various eras and sub-genres of horror, within the conventions of 90s slashers, 70s summer camp terror and witch trial hysteria. Here are some of my observations (warning, mild spoilers ahead!):

Part One: 1994 had a strong opening, reminiscent of the iconic opening of Scream (in turn influenced by When A Stranger Calls), with the domestic setting swapped for the seemingly mundane shopping mall. After the initial phone call, the menacing piano score also reminded me of the opening sequence of Halloween (1978). The fact that Scream composer Marco Beltrami worked on Fear Street gives it extra brownie points from me!

This whole sequence is packed with classic tropes and sets up the movie nicely: the snarky, self-aware line “I know you’re there!”, the lingering camera shots on a store shutter that factors into multiple moments of the story, and the good old-fashioned prank jump scare. It also directly reminded me of the mannequin scene in 90s staple I Know What You Did Last Summer, when the killer hides amongst a shop display.

Casting Maya Hawke as Heather; this franchise’s Drew Barrymore figure, was a clever nod to her role in Netflix’s Stranger Things. The scene when she is chased and attacked even mirrors the opening killing in Scream, down to grabbing the killer’s mask.

After the effective opening scene, 1994 took a little while to get going, with about twenty minutes of high school drama that could have been trimmed down. On a positive note, I liked the fact that protagonist Deena’s ex Sam isn’t the typical jock that we initially expect. It’s great to see a more inclusive relationship that wasn’t commonly represented in 90s cinema.

What follows is a fun romp through the town of Shadyside with a growing wave of seemingly invincible killers from the past. In the final act, the film doesn’t shy away from dispensing of some of its characters. One scene was particularly gruesome, and an image quite frankly I’d like to quickly forget, yuck.

Part Two: 1978 begins with the remaining protagonists seeking out C. Berman, a rare survivor of an earlier killing spree. They also have a trope-tastic possessed person in tow who needs to be restrained. Easy peasy, right?

I loved the jump back in time through Berman’s photograph to Camp Nightwing in 1978. It instantly reminded me of the setting of the Friday the 13th franchise. Tropes here included camp counsellors slacking off and hooking up, and another killer with a concealed face. Here it’s covered by a sack in tribute to Jason Voorhees in Friday the 13th Part II.

An element I found interesting was the alternating point of view between Berman and her sister, building the mystery of what happened in ’78. I also enjoyed the use of the campsite map and trying to piece together the overlap in locations across the eras. The scenes set in the tunnel were particularly tense and foreboding.

One element of 1978 caught me off guard as it subverted typical rules. Usually, horror movie killers target teenagers and adults, however this series decides that kids are fair game too. I felt the same about it when Halloween (2018) broke this rule, it’s maybe unnecessary and a bit disturbing. To be fair, it does demonstrate a truly ruthless and evil force at play in both series.

“The Truth Shall Be Your Curse”

Part Three: 1666 takes us back to a rural setting in a time of religious hysteria and witch hunts. Armed with a dodgy accent and a secret, Deena lives through Sarah Fier’s last days from her point of view. I particularly liked the American Horror Story method of actors returning to play different roles.

In terms of tropes, there are creepy kids’ rhymes foreshadowing about the local pastor, whose despicable actions we’ve briefly glimpsed. There’s also the rejected male whose bruised ego leads to tragedy. Finally, my favourite; the juicy plot twist.

Without entirely spoiling the end of the trilogy, I will say that I thoroughly enjoyed the way that everything came together. When Deena returned to 1994 to resolve the conflict with new knowledge, I was still reframing events of the previous films.

If you’re a fan of classic horror with a modern touch, I’d definitely recommend The Fear Street Trilogy. Though the question remains, will the Fear Street saga continue? It’s looking very likely based on the credits scene and Janiak’s interest in exploring more of the killers’ backstories.

Which era or subgenre would you like to see Fear Street explore next? Sound off in the comments or send us your thoughts on Facebook or Twitter!