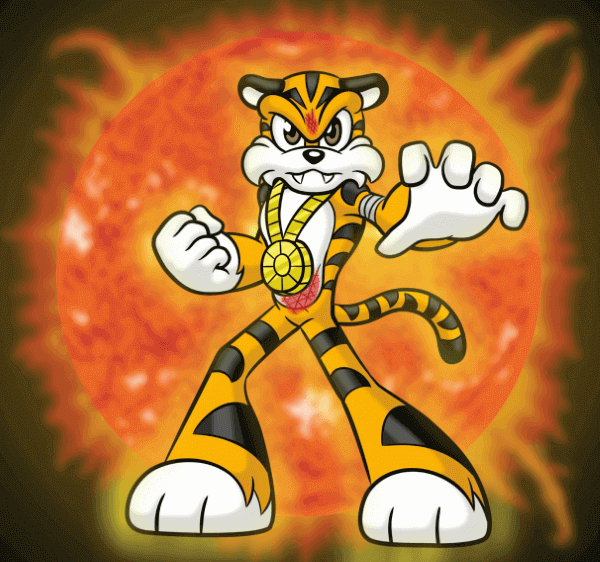 Written and illustrated by Rogerio Ferraz Da Silva; Zero Medal #1 is a fun sci-fi adventure with aliens and elemental powers. The cartoonish art style provides the comic a lighthearted tone. However, this does contrast well with its primary theme. That being, the exploration of the limitations of duty in the face of loving relationships.

#1 begins by introducing the ambitious Dr. Mente and his loyal soldier, Garra. Dr. Mente is an alien scientist that is on a hunt for the Zero Medal. Universe medals are made from the material found at the center of each planet. They allow the wearer to control the planet’s elemental power. In short, the Zero Medal is the ultimate power! To assist him in his mission, Dr. Mente also creates human-cat hybrids in his lab. Garra is a human-tiger, and the leader of these warriors. He also wears one of the universe medals that gives him the ability to control fire.

Da Silva utilizes the amnesia trope to develop the relationship between Garra and another wonderful character. Said character is Pandora. She is a policewoman currently investigating her brother’s disappearance. She instinctually wants to help others and is very capable in a fight. Despite being thrust into a conflict among alien beings, she is not the damsel in distress; she defends herself aggressively. It will be exciting to see her confront even greater foes in the future.

Although Garra is a dutiful soldier, everything changes when his ship crashes on Earth, in Brazil, Sao Paolo. He loses his memory and befriends Pandora. Initially, his mission is to kill her and eliminate the mysterious figure known only as Beta. Their first meeting foreshadows a potential amorous relationship. It is very sweet to see the warrior blush throughout their interactions. And it will be more interesting to see how Garra processes his new relationship with Pandora if his memories ever return.

The art style has a very cartoon-like quality to it. The flow of the panels makes the story read like an animated television series. The action sequences use larger panels to emphasize Garra’s impressive power, especially during action sequences. For example, when he channels his fire abilities, the panel shows a full-body image. In general, the art is very schematic. Fernando Franco and Rosinaldo J. Lages draw the backgrounds in the panels. However, Da Silva draws the main characters which provide exaggerated features like big eyes.

#1 is an exciting introduction to this world and Pandora’s and Garra’s adventures. While Da Silva uses familiar tropes, the unique characters and concept give the story an interesting angle. The art style is also very enjoyable. #1 hooks the readers with unanswered questions. What is the connection between Pandora, her brother, and Dr. Mente? Who is the mysterious Beta? What will happen when Garra finally regains his memory?

Feel like you need to know the answer to these questions in Zero Medal #1? Have a read at that first installment on Comixology as we wait for the next issue. Meanwhile, feel free to sound off in the comments below, or even send us some of your thoughts on Facebook or Twitter!