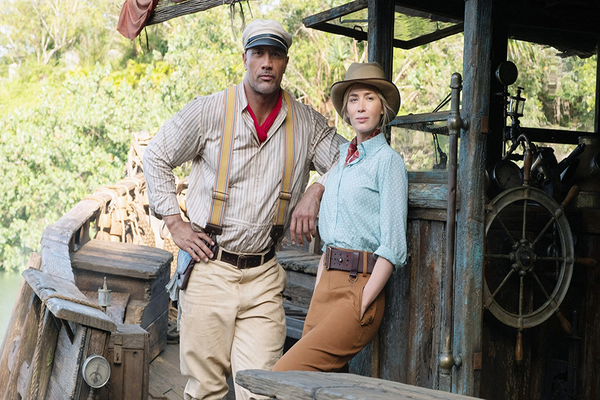 Disney is currently in a bit of a conundrum right now. Having harnessed nostalgia as a way to make big bucks, they have proceeded to produce shoddy, hollow remakes of their animated classics; and tanked Star Wars so badly, that every new project feels like an apology. On the positive side: their new animated films are always enjoyables, Disney+ is a huge success the MCU has returned, and all of the Disney theme parks have re-opened. Speaking of theme parks; Jungle Cruise is the latest attempt to adapt a beloved Disneyland attraction into an action-packed adventure flick.

As usual, when Disney catches lightning in a bottle, they’ll do everything within their corporate powers to duplicate said success. This happened with Pirates of the Caribbean; a great franchise based on an equally popular Disneyland ride. Though it sadly ran aground after the original trilogy ended and Johnny Depp lost his charm. Instead, Disney try to revive the 20th century romantic adventure genre, as they once did with the pirate genre. For the most part, it works.

This movie has been in the making for a very long time, first announced back in 2004. At one point, Tom Hanks and Tim Allen were due to star in the movie, but nothing came of it. Eventually, it was announced that Emily Blunt and Dwayne Johnson would headline the long-delayed film. Thankfully the onscreen chemistry, sense of wistful fun, sense of adventure, and comedy allows it to be an enjoyable, if slightly overlong, boat ride. Even with the cheesy, fifty-year old puns still used on the Disneyland attraction.

For the uninitiated, the actual Jungle Cruise is a boat ride located at several Disney resorts. Guests board a tour boat around the rivers of the world, seeing humorous scenes involving animatronic animals, whilst their skipper entertains them with hilariously bad puns. The experience can be very hit-and-miss depending on both the skipper and the audience’s enthusiasm and timing. The Disneyland version was once very serious; inspired by Walt Disney’s True Life Adventures documentaries, and the film The African Queen. It turned to its more comedic spiels in the 1960s, and has been that way ever since. The rides also underwent recent alterations to do away with culturally inappropriate depictions of natives.

To work the narrative around the need for a jungle cruise and a skipper, the film has a convoluted set up that follows the formula of Pirates, whilst also feeling like a fusion of Indiana Jones, Romancing the Stone, and The Mummy.

Dr. Lily Houghton (Blunt) is an ambitious, headstrong explorer and botanist; seeking to prove her worth against the snobbish sexism of the Royal Society. She hopes to acquire an arrowhead that can guide her to the Tears of the Moon; a magic tree which can heal illnesses and curses. Determined to help the British war effort, Lily and her devoted brother MacGregor (Jack Whitehall) set out for Brazil. Then hiring the boat of jaded skipper Frank Wolff (Johnson) to head downriver to a remote part of the Amazon to find the tree.

The crew find themselves opposed by Prince Joachim (a hammy Jesse Plemons); a Prussian prince who hopes to seize the tree’s powers for the Kaiser, chasing them in a submarine. To deter Lily and Frank, Joachim awakens a group of slumbering, cursed conquistadors led by Aguirre (Édgar Ramirez). Aguirre clearly has a history with Frank and wants revenge. The conquistadors are bound to the jungle by the local tribe for slaughtering their people in their attempts to find the tree. Though, when we learn their backstory and relationship to Frank, they become much more sympathetic. Similar to the crew of the Black Pearl; the warriors are skeletal, yet are made up of elements of the jungle (snakes, bees, trees, mud), creating memorable designs.

Most of the film is carried by the relationships between Lily, Frank, and MacGregor. The latter was announced, once again by Disney, to be their most prominently, openly gay character. I believe this is the fourth or fifth time they’ve proudly made this statement, only to then have said character in the background enough to edit out when the time comes for the Chinese release. Yet, this time, the inclusion is very much an integral part of MacGregor’s character. Although Jack Whitehall isn’t gay, the script, execution and acting are very straightforward and sincere.

Admittedly, there isn’t really much to discuss or touch upon in the movie. The plot is pretty predictable and slow, but the film makes up for it with its memorable action scenes and witty banter between the actors. The nods to the attraction occur early on in the film; Frank taking unconvinced tourists on a cruise, complete with bad jokes and direct nods to the animatronics. They even included the “backside of water” joke! The CGI present is overabundant and often unconvincing, when compared to the still amazing effects used in Pirates of the Caribbean. Paul Giamatti is absolutely wasted in a minor role, mostly there to insert an Enchanted Tiki Room reference, and that’s it.

Overall, Jungle Cruise is a solid adventure film, even if it’s a little long. There are supposedly talks for a sequel already, and the enthusiasm from Dwayne Johnson and Emily Blunt towards the Disneyland attraction has just been swell. Since Disney are on the eye out for new expansion projects, perhaps they should look within and adapt the S.E.A. storyline.

S.E.A., or the Society of Explorers and Adventurers, is a growing presence with the Disney resorts. In short, they are an international group of, well, explorers and adventurers. They collect rare artefacts, solve ancient mysteries, and often get involved in supernatural shenanigans. This universe incorporates numerous international Disneyland attractions and restaurants, the cruise line, and even films including Indiana Jones and Atlantis: The Lost Empire. This could be a good umbrella to put numerous films under if Disney feels being a little more ambitious in their filmmaking again.

What were your thoughts of Jungle Cruise? Be sure to speak to leave a comment on Twitter, which is monitored by our resident crocodiles Old Smiley and Ginger. They’re always looking for a hand out, but be careful – Ginger snaps.