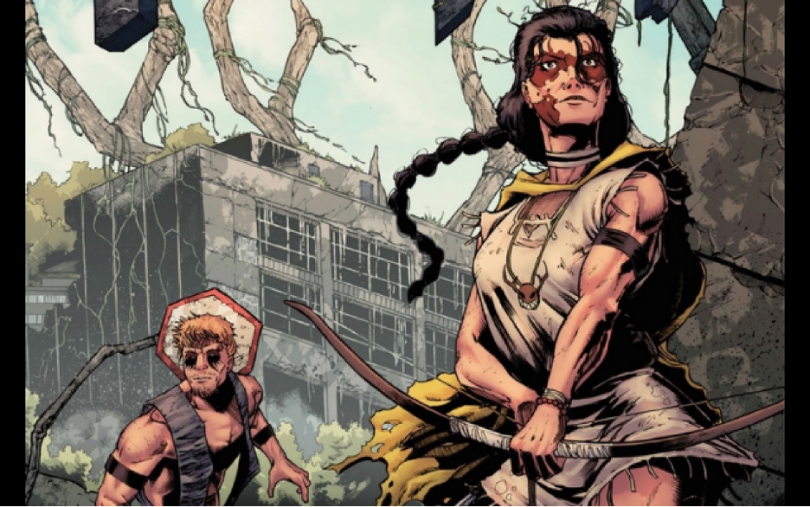 TerriTory by Blake McCarthy  is a captivating story set in a post-apocalyptic United States. With civilization destroyed long ago, the survivors now worship giant monstrous creatures appearing in the aftermath of this destruction. And eventually, the main characters find themselves face to face with their tribe’s Behemoth, interpreting this monster’s arrival in different ways. Overall, the comic’s artwork is colorful yet grim, which suits its setting as there is a lot to be explored in this new world. And the unanswered questions at the end of this story as well as the compelling contrast between the comic’s characters make this first issue an enjoyable introduction for this mini-series.

The story follows a pair of hunters as they scavenge through a ruined city to provide for their tribe. This dynamic immediately sets up the current state of the world, showing what life is like before the Behemoth encounter. The mystery behind the monstrous creatures is also very intriguing because of their religious importance to the tribes. While the two hunters disagree about whether the Behemoth  is a protective guardian or a destructive monster, they both recognize its divinity. Seeing how their opinions differ towards the Behemoth introduces an interesting conflict for the tribe’s future as the series continues.

Still, Alkia and Neebo, the two main characters, share a close friendship which is tested throughout the first issue. Whilst the pair have evident chemistry, their dangerous encounter with the Behemoth creates ongoing tension. Neebo criticizes Alkia for not taking their survival seriously whereas Alkia thinks they should be celebrating having found the creature. This debate eventually expands to the rest of the tribe. Which in turn increases the comic’s stakes. And the tribe’s fearful reaction to the Behemoth’s apparent anger shows the creature’s impact on this entire society. 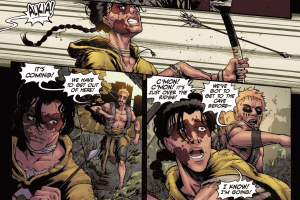 Getting into the comic’s art, Chris Sassman illustrates TerriTory  while Ichsan Ansori colors the comic. Both artists contribute to this comic’s unique style. In particular, the consistent use of shadows and gore highlights TerriTory‘s darker themes. Yet, the bright colors effectively emphasize the various focal points in the comic. Character designs additionally reflect personalities, like Alkia’s yellow jacket and hopeful demeanor. And with this trait, the hulking Behemoth is particularly impressive. Sassman convincingly draws the Behemoth as a terrifying force of nature that easily steals the show in any featured panel.  Lastly, the background is a detailed balance of concrete buildings and overgrown plant life that quickly immerses readers whilst avoiding the grim-dark tropes of most apocalyptic settings.

In conclusion, TerriTory is an interesting take on the post-apocalyptic genre with lots of potential for its future issues. The main characters feel real and their worship of giant predators as their new gods is especially compelling. The first issue ends on a cliffhanger. With an ending that has large implications for the tribe and promises to explore more of this ruined landscape. And , ultimately, I am looking forward to what McCarthy has in store for us next in this new, unique world.

If you want to read a dystopian story with primeval tribes and giant monsters, be sure to check out the Kickstarter for TerriTory now! Sound off in the comments below if you can’t wait to read more or send us your thoughts on Facebook or Twitter!