Home » “Lights, Planets, People!” Is A Powerful But Gentle Drama That Is Out Of This World 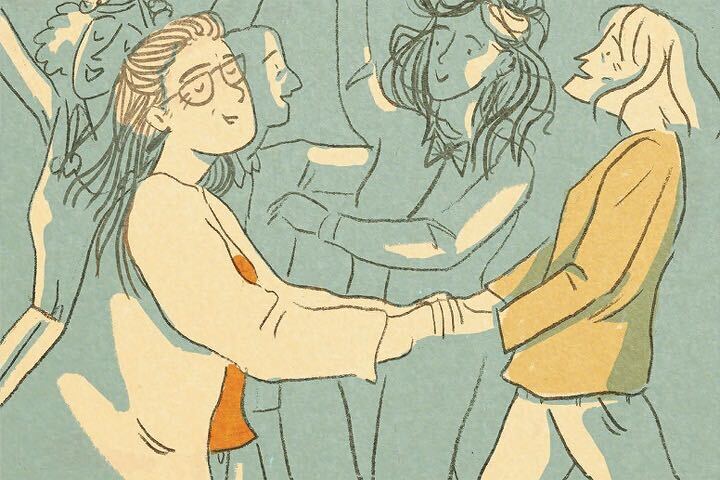 I often believe that many people dismiss comics as action-driven, or solely about superheroes. If writer Molly Naylor’s Lights, Planets, People! does anything though, it’s throw that notion out of the window. In an age where mental health and wellbeing has never been more important, this comic is invaluable in its exploration of such themes. All that against the backdrop of beautiful artwork from artist Lizzy Stewart makes for the perfect read.

Lights, Planets, People! follows the life of distinguished astronomer, Maggie Hill. Suffering from debilitating anxiety, she fears a panic attack will occur in a lecture. Because of this, she begins a therapy session, hoping to learn coping techniques to avoid such an event. Meanwhile, she delivers an inspirational lecture to a group of young women, wanting to encourage their interest in science as a whole, and not just astronomy. In a flashback we see her life; from the failure of her research mission to find habitable exoplanets beyond the solar system, and her relationship with Jane. Maggie also lives with bipolar disorder, which heavily impacts on her life.

Through Maggie’s therapy session, it becomes clear she is attending a little sceptically. This is something that crops up in a tirade against her therapist; she calls it a pseudo-science—not really worth her time. The therapist responds angrily in kind attempting to defend her profession. All this talk causes Maggie to draw the wrong conclusions and forgoes additional therapy in favour of a lecture PowerPoint. This is a loophole so she does not have to explain much and just simply lecture from slides.

Unfortunately, fate is rarely that kind. Losing the PowerPoint, Maggie finds herself forced to “wing it”. A series of infuriating questions from the audience of disinterested young women exposes a new dimension to Maggie. She is clearly passionate about her work, something that she sometimes fails to see. She sees it as her purpose, or a way to ignore her depression. However, by the end of her lecture, she gets given the chance to talk about her career and answer some frankly annoying questions. At this point, she has noticeably recaptured a bit of her spark for her work.

There is a tentative apprehension that builds as more of Maggie’s life unfolds. As the name of her mission – ELPIS, Greek goddess of hope – suggests, the comic pushes readers to invest in her fortune. You hope that she might repair her relationship with Jane; that she may overcome her apprehension over attending the mission launch. That is until we see Maggie crash, unable to even watch the launch of ELPIS, a mission she has spent twenty-five years toiling towards. The depression, the misery, the anxiety all make it impossible for her to function.

What’s more tragic is the mania that takes hold. Maggie deludes herself into thinking that she has the perfect birthday gift for Jane’s 60th birthday. She thinks that their relationship will be repaired like nothing happened. Maggie ends up travelling alone to Kennedy Space Centre to watch the launch. It’s perhaps the closest to an expression of what it’s like to live with bipolar disorder I’ve ever seen. And even then, I still believe I’ve not even scratched the surface. This is just a glimpse of how mental illness can affect daily life.

Stewart’s use of simple delicate lines to capture so much emotion makes the sentiment all the more powerful. Furthermore, the muted colours complement the storytelling, with scenes exploding as full page spreads, only to retract to raw pencil colour outlines. Stewart’s style serves Naylor’s words and articulates Maggie’s experiences. However, the most fascinating thing about Lights, Planets, People! is the multi-faceted nature of its exploration of depression; things such as how it can affect one’s personal, professional, and private life. Naylor shows this through the use of concurrent storylines; from the therapy session, the lecture, to flashbacks of Maggie’s life.

Lights, Planets, People! does not seek to be world changing. It seeks to raise awareness, not of life with mental illness, but of the power of communication. Communication can do a lot of things. Bring people together; prevent war; blossom into love; bridge Earth and a space probe millions of miles away. Maggie realises this once a lecture attendee reveals she is also bipolar. She finally admits that she misses Jane. Even if it won’t save their relationship, Maggie now knows the power of communicating. She knows well the benefits of doing it and the consequences of not.

I went into reading this comic with no context, but daunted by the subject matter. However, it will remain in my memory, not just because of Stewart’s exceptional artwork. It’s not the ending, the story or the characters that I’ll remember, but the experience of reading it; of investing so deeply in Maggie’s life. I don’t think I’ve ever read a book that has such a perceptible internal sensation of highs and lows, that is both sympathetic, inspiring and so vital in today’s world.

Would you like to explore the intricacies of mental health while basking in some brilliant art? If so, Lights, Planets, People! from Avery Hill Publishing is now out in the UK with a September 28 release date for the USA. Find out more from Molly/@MollyNaylor and Lizzy/@LizzyStewart. Don’t forget to let us know what you think down in the comments or on Twitter!