Home » “The Red Wave #1”: In Conversation With Nick Goode and Harry Hughes 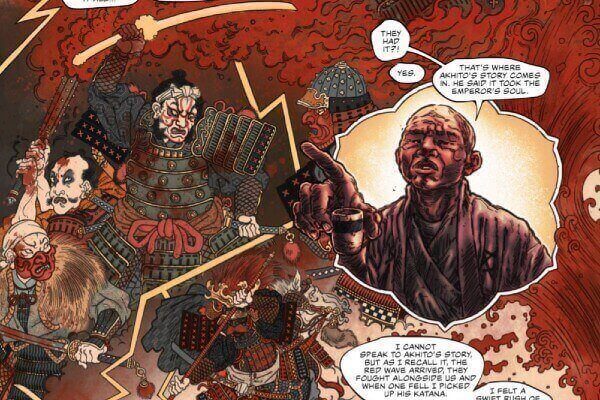 The Red Wave #1 follows six characters on an exciting fantasy adventure that is set in feudal Japan. This comic, written by Nick Goode, with art by Harry Hughes, and letters by Pat Brosseau, has elements from Japanese history woven into its plot. We had the opportunity to talk with Goode and Hughes to learn more about The Red Wave #1.

AP2HYC: What can you tell us about The Red Wave?

Nick Goode: The Red Wave is an emotional, character-driven story set in a fictionalized version of the Edo Period in Japan. It’s a story of ronin, of mythical blades lost to time and those bound to honour. It’s a project we’ve been working on for around five years, crafting a tale that is rich with subtle historical detail, but at the same time weaves magic into an authentic setting. The synopsis is:

“The Red Wave; a mighty ronin clan, exist for one reason — to find and protect Masamune and Muramasas final swords, blades charged with powerful mystic energy. Following the death of their emperor, brothers in arms Hikaru and Mizuki (our story’s central characters) have left behind a life of swords. In time they find their fates are intertwined with the lost blades when The Red Wave; unrelenting in their search, locate the Muramasa blade in the small farming village where Hikaru and Mizuki reside, thrusting the two brothers back into the world of bloody swords and broken oaths.”

AP2HYC: What inspired you to write this comic?

Goode: Both Harry and I are big fans of Edo Period Japan. Over the years we’ve had countless discussions about Samurai in pop culture, what it means to be ronin, the style of art from that period, and the general aesthetic of Japan. How there’s a real beauty that’s contrasted with brutality when it comes to Samurai.

AP2HYC: What does the future hold in store for the protagonists?

Goode: We have six characters who are all integral to the plot and their fates are very much intertwined with the long lost blades. Honour is a central theme for all of them, we’ve always felt like a ronin is a samurai who has fallen from honour, and so on one side we have The Red Wave who are ronin but have held their principles as Samurai and found honour in finding the lost blades. Katsurō; their leader is ruthless in his search to remove the blades from society. Noriko; his second in command is a fearless warrior. She’s dedicated to the cause and never falters. Daichi, Hikaru and Mizuki are three ronin who reside in a village they built with their bare hands.

These three begin our story as rice farmers, peasants who have fallen considerably from their Samurai days unsettled by their current life and struggling to find meaning having lost so much, whether it can be found in being a father, a leader or in striving to make a difference in the world. That is, until they are pulled back into the world of swords. Hikaru’s wife, Ai, is the one who sees the world as it is; she is calm and determined to build a life whilst offering strength to those who fall. Ultimately, all these characters have a role to play in the tale of lost blades and their fates remain uncertain. 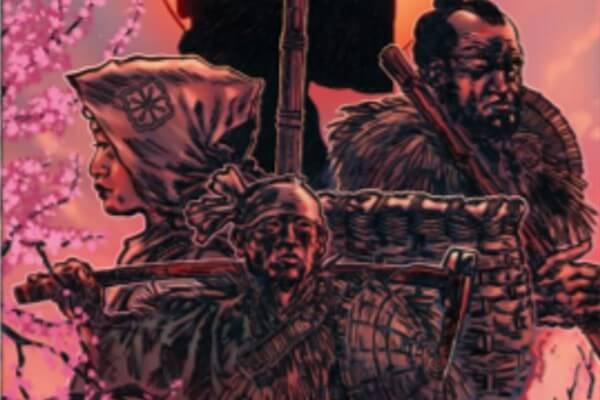 AP2HYC: I understand this comic includes elements from Japanese history. What was the research process like?

Goode: It’s been amazing! I thoroughly loved researching this, I started with researching how blades are crafted, learning how they are very much with a Samurai all through their lives from the birthing room to their death bed. All sword-smiths during that period were deemed to be holy men. They all wore white and there was something that they beat into the steal of every blade, essentially its character. So when a blade is crafted for the birth of a Samurai there is an essence to the blade.

From there I found the story of sword-smiths Masamune and Muramasa, whilst both made blades that were beautiful and elegant, only Muramasa infused them with murderous intent. It was really at this point that the research began to weave together a story. My wider research became a bit more pop-culture orientated in the sense that I was beginning to craft characters and so there’s a little bit of Kurosawa with influence of Raiders of the Lost Ark.

Harry Hughes: Visual reference luckily for this genre is not hard to come by, the challenge has been developing something that sits comfortably in a fantasy setting whilst remaining authentic to the nuances of Samurai culture. For instance, subtle details like correct posture when wielding certain weapons or how a warrior moves in their armour.

AP2HYC: How did you begin collaborating with the creative team?

Goode: Harry and I have worked on several comics together, we co-created the Snow universe in 2012 published by Black Spot Comics. Titles include Snow: The Dawn, Whistleblower, The Eventide: Snow Chronicles, and Odyssey. We usually letter our own books, but when it came to The Red Wave, we both felt like the book needed a signature feel in terms of the lettering. So we looked for outside help and we have been super lucky to work with Pat Brosseau. He really elevates the page with his style. Otherwise Harry and I are pretty familiar with the way we work, so it’s mostly endless conversations about research, references and the desires of telling this story.

Hughes: I think my style for this project treads along a path of pulpy graphic realism. We discussed early on that we wanted to represent the contrast of beauty and brutality in Edo Period Japan. Though I haven’t made a particular change in the way I approach comic-book art I’ve made an effort to ensure that this translates visually through use of colour whilst incorporating subtle folklore references to further add visual depth. For instance there’s an ironically placed owl on page 5. Fun fact, owls represent good fortune in Japanese culture.

AP2HYC: What are the central themes in the comic?

Goode: What is honour? What is strength? I think there’s a fragility to all of our characters, they’ve all got a hard past and throughout the four issues these troubles bubble to the surface, some of them are resolved and others are unresolvable. At its core the story is always suggesting that what is seen on the surface is not always what is going on inside.

Goode: We’ve got the second part of our comic Odyssey to finish lettering and colouring at some point, which will be released through Black Spot Comics as part of the Snow universe. I co-wrote the story with Luke Barnes and it’s a world away from The Red Wave, it’s a horror-sci-fi story set in a world devastated by global warming.

The Red Wave #1 is a great read for any fans of samurai adventures! Be sure to check out the Kickstarter campaign for more information and send us your thoughts on Facebook or Twitter!