Home » Get Equipped With Some Wholesome Nostalgia In “Our Adventure With Corp. Mass-Scott” 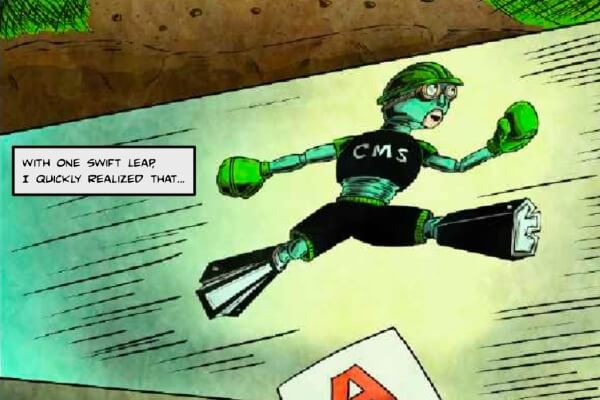 Our Adventure with Corp. Mass-Scott is an adorable three-part (or “three-world,” as it calls them) story. Written and drawn by Craig Holland, it is told from the perspective of a fictional retro video game mascot and playable character named Corp. Mass-Scott. He is the titular star of an action-adventure game on the classic game system “The Exodus-24”. The adventure begins in 1992 when Corp. Mass-Scott first arrives into the hands of his player, and from there, a truly special lifelong bond is formed.

Corp. Mass-Scott channels the energy of both Toy Story and Wreck-It Ralph, focusing on the important relationship between a child and the media that impacts them. We travel throughout the life of a child to his adulthood as Scott journeys along with him through all the highs, lows, growth, and change. It has an almost storybook-like quality as Scott speaks all his lines directly to his player, which also makes it seem as if he is addressing the reader. We see the world from Scott’s limited and unique perspective, interacting with other game characters and peeking out into the outside world.

It is also a love letter to classic and modern gaming and the icons many people grew up with. The journey of the child’s life through gaming includes more than Corp. Mass-Scott, as he befriends and even envies the other game characters that come into the scene, such as a scary goalie, a space cowboy, and even 3D-versions of themselves. The eras of gaming change, graphics develop, and the world of video games shifts. The emergence of these new systems and characters change the life of Scott and also perfectly illustrate that, though we always move onto the latest fad of entertainment and media, we will always have a soft spot for the games (or books, movies, comics, and shows) that shaped us.

The art is sketched like a coloring book, adding to the nostalgia factor. Holland’s art has a lot of character and really captures the feel of being inside a retro action game. It also goes a long way to make us see things the way Corp. Mass-Scott does, with the game world being detailed and action-packed, while the real world is giant and mysterious. The real-life humans are never seen, except for massive hands outside the game, holding the controller or turning on the game console.

The story of Corp. Mass-Scott is sure to make you feel nostalgic and maybe cause you to long for the days of simpler games. It may even make you want to dust off your old NES, Dreamcast, or PlayStation to pay a visit to some old friends.

Be sure to check out and support Our Adventure With Corp. Mass-Scott on its Kickstarter. What was the first video game you ever played? Sound off in the comments, or send us your thoughts on Facebook or Twitter!