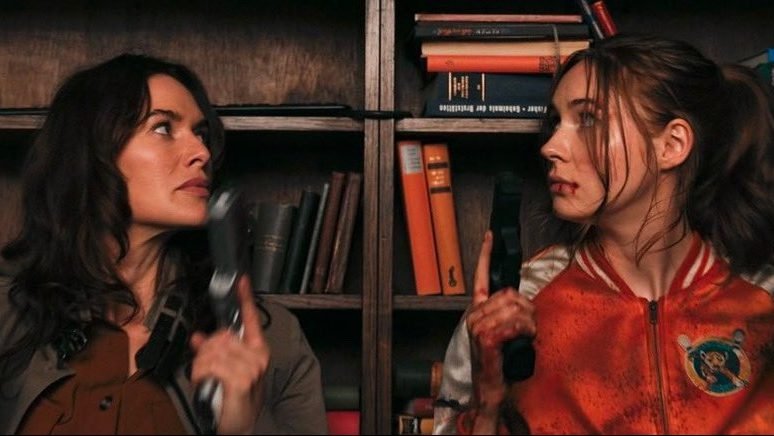 When the trailer for Gunpowder Milkshake released I was hopeful. The star studded cast, the secret hitman society akin to John Wick, and the cool femme fatale angle to tie it all together. Though those elements were certainly present in the finished product they did not play well together. So what worked and what didn’t? Let’s break it down.

Karen Gillan is showing her stuff as an action lead without the Nebula make-up. Gillian plays Sam, a top-tier hit woman whose relationship with her estranged mother Scarlet (Lena Headey) acts as her primary motivation. Sam and Scarlet play well off of each other, and there is clear chemistry between the actresses. The scenes where they interact are the emotional backbone of the film, especially as their relationship changes.

The relationships are really the saving grace for Gunpowder Milkshake. This rings especially true for the three librarians Madeline, Florence and Anna May. All highly trained assassins who are now the supply and arms dealers for hit-women. These three women are in such an interesting position of power in upholding this safe haven of sorts. Not to mention the intricate back story with Scarlet, though it did not end in the best of terms.

It’s hard not to compare a hitman movie that sets up a secret society to John Wick, but in doing so, the moments where Gunpowder Milkshake did not rise to the occasion appear vividly. One of the biggest let-downs with Gunpowder Milkshake is its lack of focus and set-up. For example, the library acts as the armory for those with accounts, with an array of weapons all hidden in corresponding book titles. It is an incredibly riveting building whose conception would have made for fantastic exploration. Yet by the end of the movie it has been destroyed and it’s rules have been thoroughly trounced. Comparatively, such an infraction in the hotel from John Wick would have meant war.

While I do believe relationships made the movie, it is also where the movie failed. Sam and Scarlet’s relationship, while deep and intricate, is restored far too quickly to be believable. As is Sam’s relationship with Emily, the child she orphaned on the job. While they all play well together there lacks depth and a real emotional synching point.

The movie is indeed absolutely gorgeous to look at. The fighting is choreographed extremely well and with minimal jump cuts. There are great moments in set and lighting especially when looking at the big fight scenes. The diner, the library, and the bowling alley are really seared into my brain for how good it looks while also being very effective in making sure the action takes center stage.

Much like a Gunpowder Milkshake, this movie looks very pretty yet tastes somewhat bitter. There was pretty packaging in its well executed action. Yet it failed to dive deeper in what made the world of the femme fatales actually interesting, as well as failing to give the audience more than a waist deep immersion into the actual character motivations and histories. Gunpowder Milkshake is a reasonably good film, yet it ends up feeling like I missed a prequel. Though, if all you are searching for is a solid action flick with a cast of amazing actresses shooting bad guys, you’ve made the right choice.

How did you enjoy the movie? What book would you store your guns in? Sound off in the comments or send us your thoughts on Facebook or Twitter!