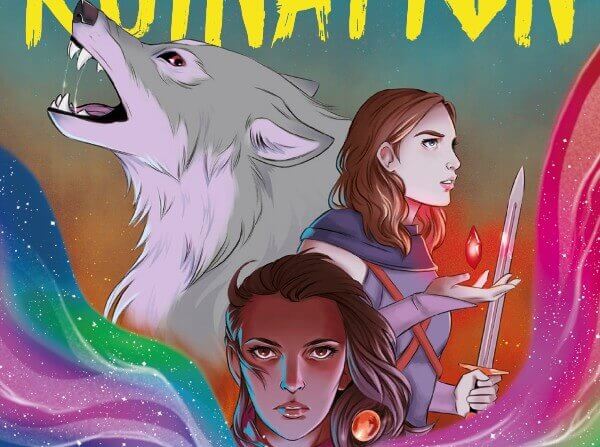 Comic book writer Ryan Bis has launched a new Kickstarter campaign with the newest issues of the exciting fantasy adventure Ruination. Which is in the same world as his previously published anthology Curiosities from Another World. This story contains plenty of magic and monsters as three unlikely allies band together to save their world. In this insightful conversation, Bis shares a little more on Ruination, his experience creating the story, and what we can expect from this wondrous world.

AP2HYC: What is Ruination all about?

Ryan Bis: Ruination is a fantasy adventure series following three young soldiers who are forced to work together to save their loved ones after a powerful warmonger attacks a fishing village and restarts a conflict going back centuries. Even though they come from opposing sides, our heroes travel together to strange worlds where they might find magical crystals to help them prevent the destruction of their world.

What was the inspiration behind this comic?

Bis: I was an avid writer when I was younger, but life happened and I gave it up for a period of time. I’ve always had a desire to do something creative again but struggled to get anything completed. Having my first kid, though, changed that. Shortly after I had my daughter, I had an audience I wanted to talk to and a compelling reason to get my thoughts down on paper. Life is short and I want to make sure a part of me will always be around for when my kids are older. I had this fantasy story ruminating in my mind for a long time and that seemed like the best way to touch on a few things that were important to me.

AP2HYC: What can you tell us about the creative team? How did you start collaborating with the team?

Bis: For the most part, I connected with everyone on the team through Facebook groups and Reddit. Nicole was the first person I brought on because I wanted to make sure an editor had a chance to tear apart my script and tell me if it was worth pursuing. Nicole has also been writing and editing for awhile and had a ton of experience that we were grateful to benefit from. Once we finalized the script, I started to assemble the art team.

Kaytee and Matias both worked with me on parts of Curiosities from Another World, and I knew I definitely wanted to work with them again. Kaytee did some amazing colors for the story that included magic effects and crystals. So picking her to work on Ruination seemed like a foregone conclusion. Matias was a fellow creator who had done a lot of freelance lettering and graphic design work in addition to putting out his own books. He knows the process from beginning to end and has been super helpful to me being new to comics.

Giulia responded to one of my online posts and she seemed like a perfect fit for this project. She has her own fantasy series, Puck, and had a ton of experience drawing diverse fantastical worlds.

I came across Rio via Twitter and knew immediately that I wanted to work with her in some capacity. I just randomly shot her an email asking if she would be willing to do a cover for us. I was expecting a polite “no” but she seemed to really like what we were doing and she’s been wonderful to work with.

I’m incredibly lucky to be working with this group!

Bis: Giulia has an awesome semi-realistic approach to linework that fits perfectly with our story and keeps some of the material from feeling too dark while still carrying the emotional weight that we want. She makes our characters expressive in a way that makes them more relatable.

Kaytee has a wonderful approach to the colors the brings out the bright, fantastical elements of our story and makes them fit perfectly in a drab, post-apocalyptic setting. Kaytee also goes beyond just filling in colors between lines by adding beautiful embellishments to our pages and borders that gives each scene a thematic look to help orient the reader tonally.

Matias’s letters are always clear and punchy in all the right places which I think is so important for immersing the reader. Matias is also responsible for the overall looks and graphic design of our book, including our logo!

Finally, Rio’s covers are such a nice complement to all of the interior work. Rio knows fantasy so well and she has great instincts for covers. While her linework is great, her colors add spectacular effects that make our covers jump out.

I should also give Emma Southey-Ray a quick shout out. While she’s done a few illustrations for the series, she’s also the person who helped with the initial concept illustrations for our main characters so she played a heavy role in the look of our story.

Bis: The story’s primary focus is on the role an up-and-coming generation plays in a society and how they chose to interact with it. While we talk a lot about the never-ending war between the Saldyrians and the Fallen, the series is really focused on how our main characters react to that conflict. Our heroes were all born into world that’s been devastated by prior generations.

Saldyria is, after all, a literal nation filled with ruins (get it?!) that are in the process of being rebuilt. If you’re a young person looking around and seeing the world crumble, what do you do? Try to work within the system your elders have set up and fix it from the inside? Or do you concede that they don’t know what they are doing and fight the system? We’ll see what each of our characters decide to do!

Secondarily, we also talk a lot about the importance of role models and mentors and the burden you take on when you become one.

AP2HYC: You previously published Curiosities from Another World; an anthology set in the same universe as Ruination. How do the works compare, and will the stories overlap?

Bis: While Ruination is your typical comic series organized into six issue arcs, Curiosities is an anthology series where each book is made up of a collection of short stories that all take place in a central setting. Curiosities is also a bit more sci-fi leaning than Ruination. There are some clear hints that they are connected, but we haven’t revealed the exact relationship quite yet. You can definitely read them independently and not lose anything, but I think what we’ve got planned is really cool once you see how the full story plays out.

AP2HYC: What does the future of Ruination hold in store for us?

Bis: So much! The entire series has been mapped out and I can’t wait to share the rest of the story if I’m lucky enough to continue putting out issues. If you’re just here for the adventure, know that there will be more strange worlds to explore and more unique crystal powers to see. We’re also going to spend a bit of time in New Saldyria, the capital city, in the second arc where you’ll get to see a bit more of what day-to-day life is like for the Saldyrians. The important part, though, is that there’s a lot of lore and backstory to still explore and I think our readers will enjoy looking all the way back to Issue 1 once we’re done and seeing how it all fits together. And the bread crumbs we left along the way!

AP2HYC: Are you currently working on any other projects?

Bis: My wife and I actually just had our second baby, so I haven’t been able to do much comic work over the last two months. Other than finish Ruination #3 and prepare for the Kickstarter. We’ve kicked off the art for #4 so my next project will be to finish revisions on the script for #5 and #6 so that I can send those off for editing. There are a few concepts for shorts I’d like to get to as well as Curiosities from Another World #2, but I’ll probably continue to be focused on Ruination at least until we finish the first arc with Issue #6 and then take it from there.

There are certainly exciting developments to look forward to in this series. For more information on Ruination #3 and #4 check out the Kickstarter and let us know what you think! Sound off in the comments or send us your thoughts on Facebook or Twitter!