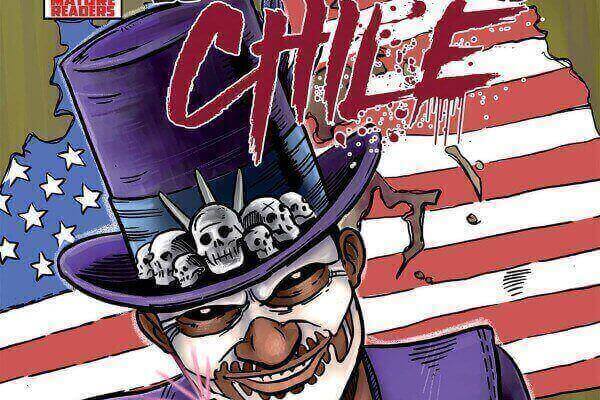 Voodoo Chile is a five-issue mini-series black comedy set during the Vietnam War that explores religion, destiny, zombies, and gun-running themes. The comic is written by Casey Allen, with illustrations and story input by Pete Woods, colouring by Anthony Wilson Go, and covers by John Charles.

The first issue of Voodoo Chile sets up a really interesting premise, with some intriguing plot points that definitely make me want to read further issues. Before the comic begins, Voodoo Chile has a panel that introduces all the main characters to us, showing us their names, faces, and a brief character description. This specifically is something I very much appreciated, as I personally always struggle with remember who certain characters are when first starting out reading or watching any form of media. So, this panel really helped and allowed me to go back to it a few times so that I could link who each character is in the story.

The art style of Voodoo Chile very much feels like it links to the setting of the comic itself and is similar to other media art forms which have shown the Vietnam war. Throughout the comic, we get a lot of green and brown colours, which really capture the Vietnam setting and the uniforms of the soldiers and Vietnamese fighters. This art style and the colours are then juxtaposed in the brief few panels where we see Baron Samedi in the realm where he lives. In Baron Samedi’s realm, we get a cooler colour pallet of light blues and purples, which makes it distinct from the Vietnam setting while also giving off a very magical sense. Due to the use of these two differing colour pallets, it makes things easier on the reader, as we can easily distinguish the environments where panels are set in. At the same time, it also just adds an unquantifiable element to the comic in general.

Despite the first issue of Voodoo Chile being an enjoyable read, it also does have some negative aspects to it as well. The first negative that I encountered is at one point in the comic, the character London is explaining to Max how he managed to possess the body of a Vietnam soldier, and the description is a bit confusing. This explanation breaks one of the major rules of storytelling, show, don’t tell, and seeing as this was about the powers that Max now processes, it feels to be a bad move that they didn’t visually show us as to how London managed to possess the Vietnam soldier’s body.

Another negative aspect of this comic is there were various times throughout the comic where things were just rather confusing. At times I literally had to look back through the comic as it felt like I had missed something, but I hadn’t. For instance, in one part of the comic, London is lighting a cigarette next to an unconscious Max, and the next panel of the comic then cuts to an event which is described as having happened ‘seconds earlier,’ with the Vietnamese fighters attacking the US soldier’s base. This in itself is a bit confusing, as it feels like the comic could have just had the events happen in a linear timeline rather than cut back to an event that happened a few seconds earlier. This, however, is not the only confusing aspect of this first issue of Voodoo Chile. There are a few others where it just felt like some more context is needed to fully grasp what is happening.

Ultimately, Voodoo Chile is an interesting first issue and sets up some intriguing plot points which make the reader want to read the next issue, while the comic also uses an interesting art style. However, the comic itself can be confusing at times, while it also breaks one of the biggest rules of storytelling. But as this is the first issue, perhaps these are some ‘growing pains,’ which will be ironed out in future issues.

You can check out Voodoo Chile’s Kickstarter here, or you can purchase a physical copy of Voodoo Chile #1 by emailing info@plwoodscomics.com

Are you interested in reading Voodoo Chile? What do you think about the first issue? Don’t forget to let us know in the comments or on our Twitter!