Home » “Over Coral Island” Is A Trip Worth Taking 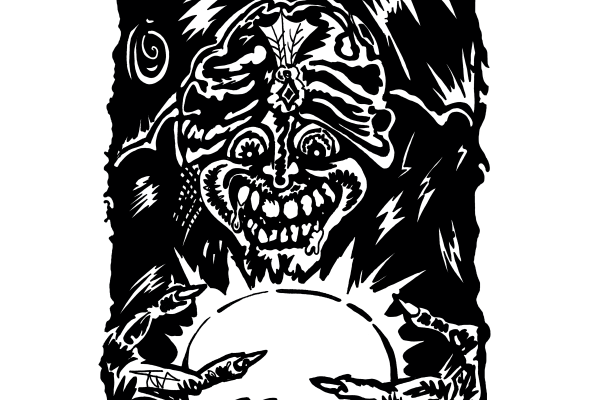 Nick Power‘s Over Coral Island tells tales from a mysterious island full of eccentric people. The story brims with dark humour and a healthy dose of British slang. Ian Skelly‘s illustrations reflect its more surreal elements with a touch of horror. A map of Coral Island opens the story and reminds me of classic adventure films such as The Goonies.

At first, it’s uncertain when the story takes place. It has a very retro feel with references to Charles and Diana merchandise, and the old TV show Eldorado. It’s not until they mention the Ace of Vapes shop that you’ll find it’s set in the modern era. The story switches between different characters and their history on the island. Some of it dates as far back to the 1920s. This nonlinear narrative is intriguing as it creates some surprising links between characters.

This storytelling set-up allows Power to explore different perspectives on time. While one character criticises the idea of nostalgia, others lament changes in habits over the course of generations, such as a loss of interest in amusement parks. A storyline highlight of this method is the Picturehouse cinema and its fate. The time jumps forward within the space of a couple of pages. It’s clever and brutal. I relate to the idea of the cinema as a safe haven and a magical place of escapism; “We hid under your starless canopy” is just one of many beautiful images in the book.

The macabre atmosphere which hangs over the story is clear from the very first page. Character Jackie Boy says it best; “We are attracted to the life-or-death, see, the real howls of pain and joy”. That is to say, death looms large over Coral Island. Tragic accidents; references to past murders; an eerie shrine; a lost child. These are just a handful of examples. I like this dark edge to the story. It creates a deeper, more nuanced setting. In fact, the theme of darker realities and illusion runs throughout the entire book.

One of the most effective examples of this is when a pantomime Tinkerbell takes drugs outside of a theatre during an intermission. This creates a contrast between a family-friendly performer and their real life actions. Power explores this duality further through the character of Prophet Zaar/Edward Fear. His use of chemicals to improve the mood of the visitors to the North Pier has good intentions. But this does raise ethical questions. I particularly enjoy this Batman-style origin story though. It shows the evolution of a scientist into a man interested in the occult.

Another highlight of Over Coral Island is its dark humour and satire. I love the memorable descriptions such as someone in a “force field of perfume”. Another standout is a cult’s monthly charges for members if they find “enlightenment”. I also like the plastic surgeon who secretly uses margarine for lip filler. Somewhere down the line, you’ll find that the creators of the book are members of the band, The Coral. If you’re anything like me, you’ll laugh at the multiple references to themselves throughout the story. Especially with lines like “it’s in my contract” when discussing bands making so much more sense!

Overall, Over Coral Island is an entertaining read. Its blend of realistic and spooky elements are like a fever dream of a childhood holiday. I love the atmosphere it creates and its specific British cultural references. Its nonlinear story is clever in the way that character backstories pay off that I need to read it again! After reading the book, I also want to listen to the album Coral Island that launched with it.

If you’re a fan of The Coral, you’ll find this a good read. And even if you’re just looking for something quirky with an edge, this might also be fun for you! You can find Over Coral Island on its official website. Have you read it yet? Sound off in the comments or send us your thoughts on Facebook or Twitter!