Home » Tis the Season of the Slasher: Top 6 Most Terrifying Slashers 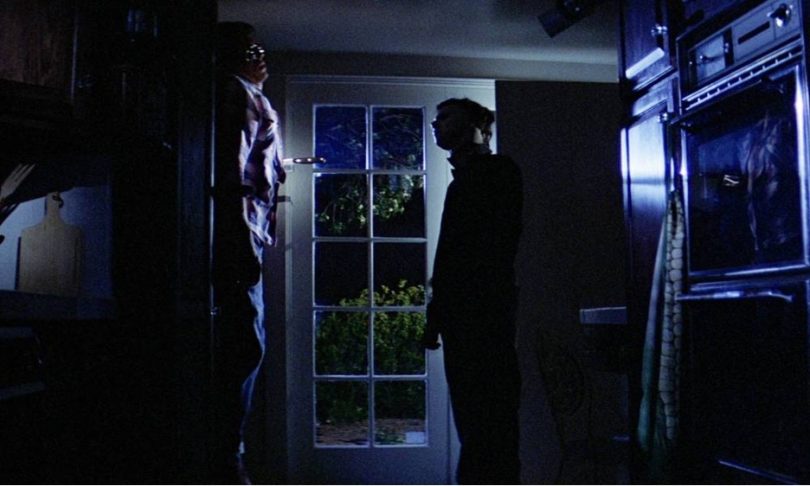 Welcome to a list that took over 24 years of slasher research. And we went back and forth on the title a few times even up to this last week. “Top 6 Slashers”, “Top 6 Horror Movie Villains”, “Top 6 Movie Characters You Wouldn’t Want to See in a Dark Alley”. But we ran into multiple issues.
Firstly, there are way too many horror movie villains to count so we had to hone in on the slasher category. But what qualifies as a slasher? Do you have to kill people with a weapon that can slash people? Do you have to kill more than one person? Also just “Top 6” with no clear cut tool for evaluation in the title? That simply will not do.
So finally we came to a title that we could all get behind. And a definition of slasher that makes sense. You have to had killed multiple people in the movie or there at least needs to be evidence of that. So sorry Jack Torrance; you’re a legendary horror movie villain but too dull for this list. Same goes for you Chop Top. Also we’re not including Regan MacNeil or Damien Thorn on this list. Iconic characters but a little too supernatural. Anyways, out of respect for their contributions to my favorite genre I’ve added four honorable mentions. But after that, here are the top 6 most terrifying horror movie slashers.
Let’s first give some shout outs to Chucky, Jigsaw, Pennywise (both versions), Buffalo Bill, Pinhead (I know very supernatural but a shout out doesn’t hurt), The Creeper, Loverboy, Angela Baker, Mrs. Voorhees, Cropsy, Harry Warden, Patrick Bateman, Henry, The Collector, Frank Zito, Mick Taylor, Otis Firefly, Gabriel, Art the Clown, Jerry Blake, Rose the Hat and Billy Chapman (I know I need to chill). 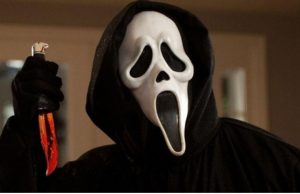 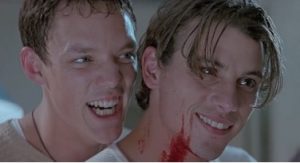 I love this movie and I love these guys. The way Wes Craven constantly swerves the audience towards who the killer is until the end is brilliant to the point where we don’t even consider that there could be two killers. And Billy and Stu add in just enough insanity with a concept that unfortunately is pretty realistic to be a very terrifying slasher duo. Check out that movie store scene in this film to see how scary Billy and Stu can be even without a knife or Ghostface costume. I will forever love Matthew Lillard for this performance. That and he’s a terrific Shaggy. 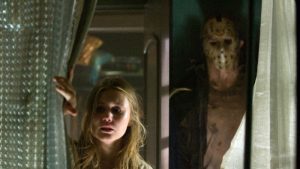 Just want to be clear I love all these guys. And if we’re going by my favorite Friday the 13th movies I’d either pick Part 3, Part VI, or the Freddy vs Jason film. But when it comes to which version of Jason is the most terrifying, Derek Mears portrayal of the Camp Blood slasher separates itself from the pack. This guy is big, fast, and has an intensity to him with his movement that even surpasses the great Kane Hodder and Richard Brooker. This is the last Jason I’d want chasing me in the woods. 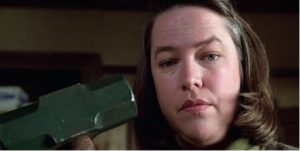 The legendary performance by Kathy Bates that made her a mainstream name. Misery certainly lives up to the beautifully twisted mind of its literary creator in Stephen King. The movie is a slow burn as Paul Sheldon gradually discovers that it might have been better if he died in that car wreck.

What’s so great about the movie and this character is how a simple rant about a drive-in movie screening is what begins to peel back the layers of who Annie Wilkes really is. And yes she’s a slasher even though she only killed one person in this film. There’s plenty of evidence that she’s killed babies in the movie and what she did to Sheldon’s ankles is certainly enough to qualify for this list. 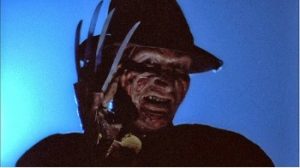 If we’re going by my favorite incarnation of Mr. Kruger, it would have to be from A Nightmare on Elm Street 3: Dream Warriors. Because that version of Freddy is the perfect combination of funny and scary. I love a slasher that can combine those two qualities. But if we go by which Freddy is more terrifying, it’s a close race between the original and first sequel.

A Nightmare on Elm Street 2 is extremely underrated and terrifying. But still doesn’t quite have the iconic scenes of the original. The Tina and Glenn kills are therefore just enough to put the iconic Robert Englund’s original performance of the worst nightmare you could ever had over first sequel Freddy Kruger. 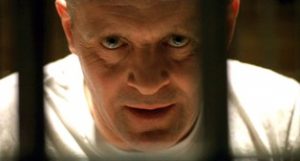 Yes this is a horror movie and yes Hannibal Lector can be considered a slasher. Don’t believe me? Watch this film, the sequel Hannibal, and the show Hannibal. This guy eats people and kills in some of the most inventive ways imaginable. This was the film that started it all as Lector’s presence was terrifying even before we met him, with Dr. Frederick Chilton telling Clarice how Hannibal the Cannibal ate the tongue of one of the nurses in the Baltimore State Hospital for the Criminally Insane. All with a pulse that never went over 85.
And that glass barrier protecting Clarice from this madman feels like paper machete when they discuss her traumatic past. This is one of greatest characters in cinematic history and he’s on screen for only 16 minutes. For him to be even more terrifying than Buffalo Bill says a lot about Anthony Hopkins‘ performance. 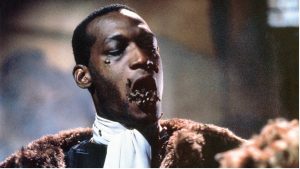 What more can be said about this character. It’s terrific that it finally received a worthy sequel that can allow people to further appreciate just how terrific the original Candyman is. But this is a character that suffered an original massive injustice. And now he serves as somewhat of a coping mechanism for a dilapidated community to blame their troubles on.

Which also turns out to be somewhat true in the film, but also speaks to Cabrini-Green’s haunting predicament. But Tony Todd instantly became a horror icon in that parking lot scene. And it only escalated from there with the bees. Another aspect that makes Candyman such a terrifying slasher is that he made even the daytime feel unsafe. That and mirrors. 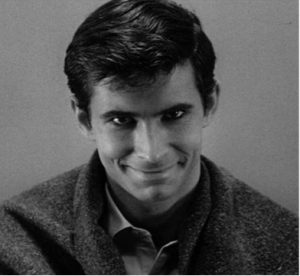 The most terrifying mama’s boy brings us the most memorable slasher scene ever. That shower scene changed cinema forever! And the character of Norman Bates reimagined what a killer could look like. Such an unassuming, polite young man that was seemingly in a terrible situation due to his abusive, homicidal mother.

You see shades throughout the film of this madness in Norman’s conversations with Marion Crane. But still throughout the film Anthony Perkins does such an excellent job of adding to the duality of the character, where even in the end you feel bad for him. Perkins further adds to these elements in the extremely underrated Psycho 2. 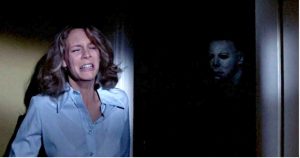 Evil in the flesh. The ever impending doom that in almost every film is slowly but surely getting closer and closer and closer to our main characters. There are many very good incarnations of the hometown hero. Even the most recent version of Michael played by James Jude Courtney that we saw in Halloween (2018) was terrific.

And I wouldn’t want Tyler Mane from Rob Zombie‘s Halloween films chasing me either. But still no one quite captures the ghost like, demonic presence of Nick Castle. Combined with John Carpenter (who can make a car terrifying) and you get the granddaddy of all slasher movies. Michael’s breathing at the end of the film is enough to send chills down anyone’s spine. 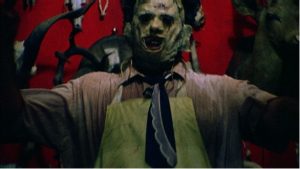 It may not be the greatest, but you have to appreciate the Texas Chainsaw Massacre franchise. In every single film there are multiple moments where you ask yourself “what the hell is going?” For better or for worse (looking at you Next Generation). Even though a psychotic Matthew McConaughey is a lot of fun. However, this is the franchise’s crown jewel, that somehow Tobe Hooper intended to be a horror comedy.

The Texas Chainsaw Massacre 2 definitely is a horror comedy and I have a lot of love for that film, but watching The Texas Chain Saw Massacre is one of the most gruesome, terrifying, uncomfortable, confusing experiences you will ever have. This is almost barely a movie, it’s an experience into hell as you feel like you’re watching a snuff film. All these found footage films can’t hold a candle to the realism that this film brings. And it all revolves around one of the most horrifying and complicated slashers ever in Leatherface. One which Gunnar Hansen brings to terrifying life in perhaps the greatest horror film ever. 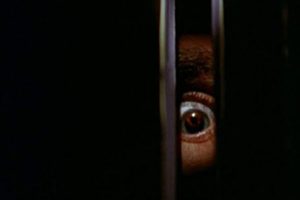 A controversial, but super necessary number 1. Much of what makes Billy terrifying is the ambiguity behind the character. As well as where he is throughout this winter horror classic. This is the only slasher film that upon re-watch, upon re-watch,  makes me incredibly uncomfortable. Maybe it’s because I sleep in the closest room to my house’s attic. Maybe it’s because I’ve been in my house alone at night a few times recently and the thought of an unhinged serial killer having a confounding shouting conversation with multiple personalities in his head is a bit unnerving.

And once again this guy is seemingly in the hardest place in the house to access. Giving the impression that he can be any place at any time he wants. Or maybe it’s that eye. I don’t know, but in terms of being an overall terrifying presence throughout a movie, Billy is Michael Myers on steroids.

We’re all in agreement here right? No controversy, and I’m sure I’ve offended no one. But anyways, if you happen to disagree, sound off in the comments or send us who you think the most terrifying slashers are on Facebook or Twitter! And Happy Halloween!