Home » So, About That “Venom: Let There Be Carnage” Post-Credits Scene… 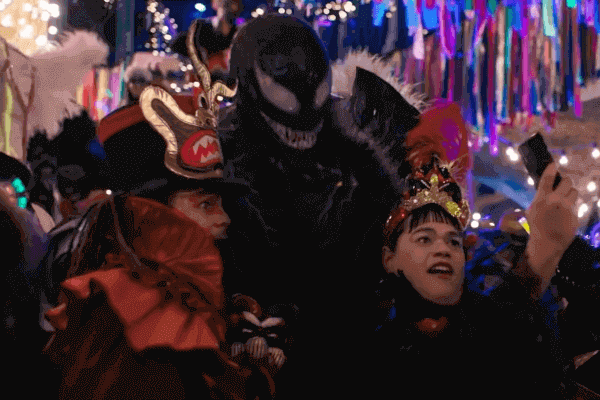 Wow. Before we begin, I need to know. Have you seen Venom: Let There Be Carnage yet? Are planning to do so spoiler-free? click off now.

So there’s a bit to unpack here, more than you might think. As a refresher the scene picks up right after the film leaves off; Tom Hardy as Eddie and Venom sitting and relaxing in a tropical hotel, getting some much needed R & R after their bout with Cletus Kasady and Carnage. Eddie and Venom start to discuss Venom’s past before meeting Eddie, when suddenly a bright light and violent shaking engulfs the world around them. Finding themselves in a different and nicer room, both are confused as the TV changes from a telenovela to a news broadcast. J.K. Simmons’s J. Jonah Jameson is reporting on the identity of Spider-Man. We see Tom Holland’s face on the TV screen, and Venom approaches it, mutters “that guy…” and licks the screen menacingly.

What we just saw almost certainly Venom actually crossing over from his own universe into the MCU. This is a massive development that seems to be part of the build up to some insane Spiderverse shenanigans in the upcoming Spider-Man: No Way Home. After seeing Alfred Molina‘s Doctor Octopus in that film’s trailer, along with lots of rumors and speculation, it definitely seems that villains from past Sony Spider-Man films will somehow be coming into the MCU to face off against the wall crawler. And now it seems that that could include Tom Hardy’s Venom as well.

Aside from the craziness of seeing a character shift universes and franchises on-screen, the most interesting part of this twist to me was Venom’s reaction to seeing Peter. It may just be me, but it seemed like he knew him. Which this version of the character probably shouldn’t be able to do, based on what we know. No version of Spider-Man is known to exist in Sony’s current Spider-Man Universe alongside Venom. However, it is possible that Venom could recognize him for a number of reasons. Venom and Eddie were just talking about how little Eddie knew of Venom’s past, and Venom states that Eddie’s human mind couldn’t handle the universe-spanning hivemind of the symbiotes’ collective memories.

Perhaps Venom innately recognizes Peter since other versions of them have come to blows elsewhere in the multiverse; look to Sam Raimi’s Spider-Man 3. Or maybe this Venom did bond with his own Peter Parker from this universe at one point; we just never saw or heard about it. This would be a big retcon, but I could see it happening. From an out-of-universe perspective, it is important to remember that Spider-Man (as a character and franchise) is still locked in a weird limbo of ownership between Sony and Disney-Marvel. So retcons and multi-versal mashups are an easy way to allow this character to continue to be in flux between the rights holders. Regardless of what happens, there is a very real possibility that Venom will be one of the villains to appear in No Way Home and finally enter the MCU to meet his web-slinging nemesis.

Personally, I am very curious to see what becomes of this twist. The fact that the most talked about aspect of the film comes from a scene that isn’t even in the movie, might just speak volumes. With the possibility of Spider-Man being Venom’s next adversary, poor Carnage already seems to be forgotten.

I’ve always felt that this version of the Venom character is missing something without his ties to Spider-Man. Spider-Man is a key part of Venom’s original origin story. Seeing as Eddie and the symbiote bond over their hatred for Spider-Man/Peter Parker, becoming a twisted reflection of him. Venom does work on his own as a fun and dark antihero. But I do wish the MCU could have done the Black Suit arc with Tom Holland’s Peter. If nothing else, hopefully now we may finally get the spider symbol on Venom’s chest.

What do you think this means for the future of Venom and Spider-Man in or out of the MCU? Do you think we’ll see Venom make an appearance in Far From Home? Sound off in the comments or send us your thoughts on Facebook or Twitter!