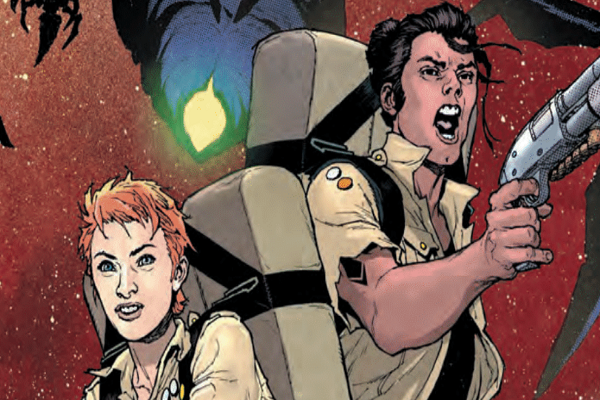 Back in March, I reviewed two issues of Scout’s Honor; a comic by David Pepose telling the story of Boy Scouts becoming post-apocalyptic soldiers. It follows Kit, a Ranger Scout training to become part of the Eagle’s Guard. Kit’s hiding a big secret—she’s actually a girl! Not just that, but in the first two issues, she finds out that the very scouts she has based her life’s work on have been hiding some dark secrets of their own. Now, the entire series is complete! If you want to check out my review of the first two issues, click here! For this one, I’m diving deep into the whole series.

First of, Scout’s Honor TPB comes in at a whopping one-hundred-twenty pages of content! The series is five issues long with all of them being in this edition. You can only purchase the complete edition rather than separate issues. Personally, having everything in one place is a really nice thing to have. Taking place in a post-apocalyptic Colorado; Kit being a girl is obviously a big part of the series. The Ranger Scouts only accept men into their ranks – the Scoutmaster especially considers girls a detriment to the Scouts. It’s because they’re “too headstrong and emotional”; according to him, men and boys fall into line much easier without women to challenge the order. If it not for women, everything might just be more peaceful.

This viewpoint heavily contrasts against the Highwaymen – the so-called “barbarians” of the Badlands. When Kit meets them, they don’t treat her any differently because of her gender. If anything, they tease her because of how young she is. But Kit acts very mature for her age and has information that benefits the Highwaymen; hence their quick friendship. One of the biggest twists stems off of this. The Highwaymen and the Ranger Scouts, despite their differences, have a lot in common. Kit finds out that the Ranger Scouts are sending the Highwaymen weapons so that they always pose a constant threat to the Scouts. It’s supposed to be a way to keep order and union between the Scouts. After all, if the Scouts don’t all have a common goal, then what’s stopping them from disbanding and causing chaos?

That’s what the Scoutmaster has been trying to do all along: keep order in their civilization. If everyone has something to fight for, then they will not only be safe, but are able to defend themselves from the horrors of the outside world. The extremely well-polished art style represents these themes and the many clashes of ideologies present throughout Scout’s Honor; with pops of bright color in a gritty landscape. I especially love how Kit and the Scoutmaster are drawn. Kit never looks completely feminine, and almost all of her panels are very convincing of her disguised gender. The Scoutmaster’s eyes are scribbled out in many of his panels, indicative of a scowl and his dark intent. His costume design is also very nice; it has got some religious leader vibes that definitely works considering his role.

Overall, Scout’s Honor is a thrilling, action-packed story with themes of finding yourself and challenging the institutions that raised you. The characters are all well-rounded, and Kit is a great protagonist that you can ultimately sympathize with. I do have one concern though. I wish we could spend more time with the Highwaymen. Especially because they become a crucial part of the story in the last two issues. We don’t know much about how they live and how they’ve built up their society aside from the Ranger Scouts’ propaganda. But in all honesty, given the story’s length, that’s one thing that doesn’t need to be shoehorned in. I’m also going to give this series one of my highest compliments; I think this series can make for an excellent movie or TV show. Seriously, a TV show can do these characters so much justice!

I recommend Scout’s Honor to any fans of the post-apocalyptic genre, the Fallout games, or even Mulan! Pepose and his team should be really proud of their work on this series. What lies in store for Kit and Dez now that the Scouts have disbanded? Does this call for a sequel? Wink wink, Pepose and Co.

What did you think of Scout’s Honor? Were you in the Boy Scouts or Girl Scouts as a kid? Scout’s Honor TPB is now available to purchase on David Pepose’s official website, as well as Amazon. Amazon also has an option for a Kindle version. Let us know in the comments what you think of the TPB or send us your thoughts on Twitter!