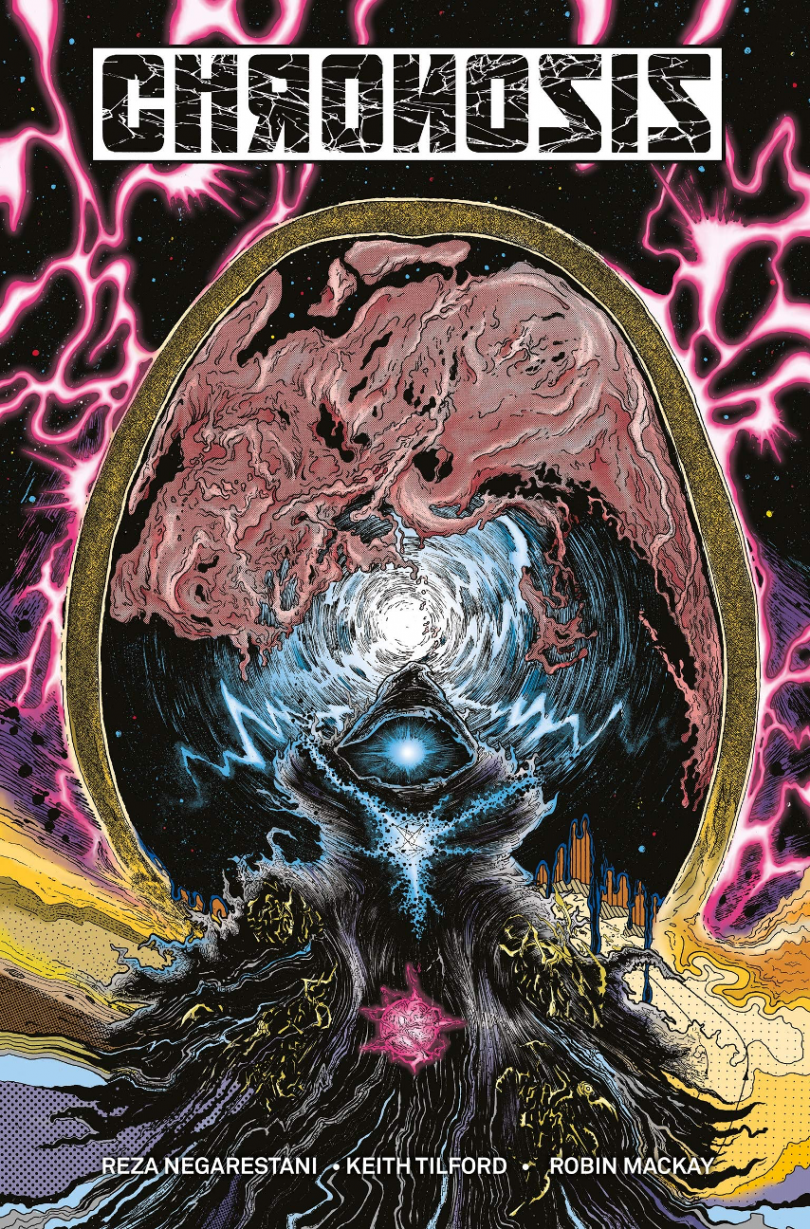 Chronosis is a philosophical dive into a universe as complex visually as it is conceptually. Which is what the team of Keith Tilford, Reza Negarestani, Reza Blades, Robin Mackay, Kilford, and R. Mack The Knife goes for in their abstract multiverse. Negarestani and Tilford are responsible for the comic’s plot, while Blades handles the script. Mackay writes the segments that take place on earth and Killford artistically brings this comic to life. Mack the Knife edits the comic that follows multiple storylines which revolve around two main elements. Time and the Chameleon Shadow.

The concept of time plays a key role in Chronosis; it both imposes limits and expands the powers of certain societies within the multiverse. Those who can master it, such as the Monazzeins, begin to study and draw correlations between the many different worlds. They hope to eventually help others realize their predicament and break free from their worldview. Meanwhile, an unknown entity called the Chameleon Shadow travels across the multiverse. It takes on different forms and threats to anyone and anything it encounters. This includes the Lacars who anticipate their impending doom and decide to relocate to earth.

Throughout much of the comic, this society struggles to grapple with their situation. The Chameleon Shadow is an entity that they are unable to understand and stop. There doesn’t seem to be any motives or natural explanation for what it’s doing. At the same time, Jeremy Charles – an “earthbound hawker of paranoid cosmic visions” – grows tired of his life as an author and motivational speaker. He’s also dubious of his statements about earth’s status within the cosmos. This ties into the endless cycle of the limitation of intelligence between regions. This is a dynamic that the Monazzeins consistently witness throughout Chronosis.

Ultimately, the Monazzeins’s find themselves tested when Scout 5 crashes by their temple. Bound by its own world; the Monazzeins contemplate if it is possible and worth saving this strange being. As their own world renews every five minutes; all memories will disappear from this situation very shortly. With this scene, the mission soon becomes clear among the Monazzeins. It’s not to give the “tribes false hope” of their ability to master time and not be bound by their own world views. Instead, it is “to deprive them of the comfort that delude them”. Which points to the idea that the Monazzeins are somewhat tortured by the knowledge that they have.

Overall, the team of writers, artists, and philosophers give the readers a lot to grapple with in Chronosis. Yet, the comic remains visually stunning and inventive in its creation of a multiverse. I’m sure we’ll see more of it in the future. Additionally, another cool component at the comic’s end is the section on the origins of this multiverse. You can see how the team came up with idea in the first place and how they brought it to life. Overall, I think the description of this comic from the creators is in the end very fitting. Chronosis is an “explosive universe in which the worlds of pop culture, modern art, philosophy, science fiction, and theoretical physics crash into one another”. So if you’re into this blend, I definitely recommend checking this one out!