Home » Fight For The Space Colonies In “The Saturn Effect: Alpha” I And II 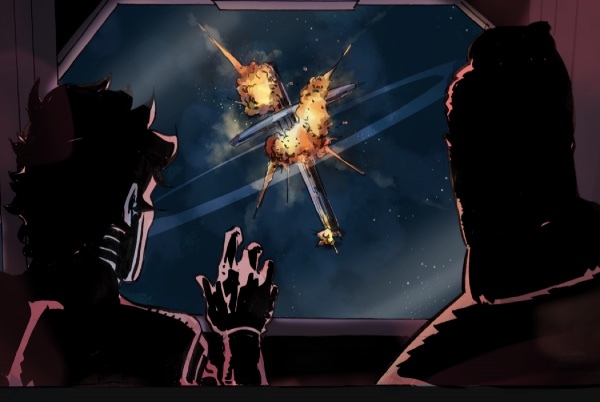 The first two parts of The Saturn Effect: Alpha by Chris Moses kicks off a promising sci-fi story. It’s full of colonial turmoil, strange religions, and futuristic tech. The plot follows siblings Alpha and Ri – citizens on an orbital satellite space colony. A mysterious and unseen benefactor guides them on a mission. Along the way, they meet another set of siblings; twin brothers Glass and Bones. These two are part of a group known as The Pure. Through their adventures, we see the unraveling conflict between Earth and its space colonies.

The Saturn Effect doesn’t rely on exposition at all. This makes for a really interesting and immersive reading experience. Dropping us off right in the middle of the adventure; of the sibling duos, the greater colonial conflict, and bits of lore we pick up along the way through gradual explanation and context clues. This works well to make the story immersive. But there are aspects in which I think the comic can get a little bit confusing. There are a lot of factions, characters, and sci-fi jargon. Still, I’m able to understand and connect with the emotional core of the story – such as the protests and freedom fighting of the Titan locals against the oppressive, Earth-ruled colonial government. The same goes for Alpha and Ri. They are entertaining and likable protagonists that make it clear their goal is to liberate the colonies from Earth.

While I wish a little bit more time is spent on Alpha and Ri’s place in this wider world; it’s continuously engaging to watch them banter and work together on their missions. I also really like the familial and cultural struggle between Glass and Bones. One is aggressive and prejudice, but desperate in his goal to get to Earth; the other is passive and kind, forming a relationship with a Titan or “Mutie”. The Pure seem to look down on the “Muties” despite also seemingly seeking freedom from Earth’s colonization. This sets up multiple sides in this political struggle. It truly feels like a solid start to a complex and deep narrative with lots of interesting conflicts already appearing.

In addition, so much of the story comes visually to the readers. There’s a lot of detailed and dynamic panels that really bring the space colony and its denizens to life. Even when the specifics of the sci-fi worldbuilding are hard to grasp through the dialogue alone; they are almost always made expertly clear through visual storytelling. The Saturn Effect is full of rich artwork that makes the background feel very alive and alien. It harkens back to some retro feeling sci-fi aesthetics. But still, it remains feeling modern and maintains its own style. It also does a great job at conveying movement, combat, action, and lively character expressions.

It’s hard to say exactly where The Saturn Effect is going to take us across the stars. But I don’t mind that at all! While I think digging into the past of Alpha and Ri a little more may have strengthened this opening; I have no doubt that we’ve only scratched the surface of what this story has to offer. There are a lot of unknowns about this new world. But as with most sci-fi stories, that’s half the fun. I much prefer that this leaves me wanting more rather than inundating the reader with tons of exposition. As the characters of The Saturn Effect say, things are looking pretty “intergalactic”!

Would you ever consider living in a space colony? What are your thoughts on this intergalactic political struggle? If these are topics that interest you, be sure to check out The Saturn Effect: Alpha I and II on its Kickstarter. Don’t forget to sound off in the comments about your thoughts, or tweet us over on Twitter!