Home » “Meanwhile… #11”: A Memorable Mélange of Mystery, Mayhem, and More 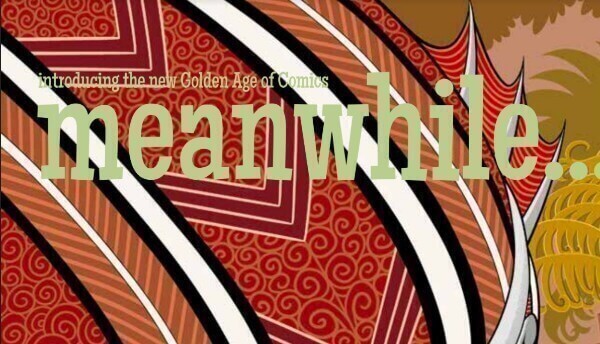 Meanwhile… #11, the latest volume of Soaring Penguin Press’s comic anthology series, is a vivid and memorable collection. The thirteen comics that publishers Tim Pilcher and John Anderson curated include a CEO’s unexpected acid trip, a witty twist on a mad scientist’s hypermasculine ego dream, a Gothic tale about a murderous troll. With such a variety of stories at hand, there’s something in this volume that’ll interest every reader.

Established series fans will be pleased to hear that the anthology contains the latest chapter of “Destiny,” the fourth volume of Gary Spencer Millidge’s award-winning comic series “Strangehaven.” An offbeat murder mystery set in a rural English town suffused with secrets, the original “Strangehaven” captured readers’ attention with its oddly supernatural premise and soap opera-esque character drama during an eighteen-volume run between 1995 and 2005. “Destiny” marks Millidge’s return to the series and showcases his photorealistic art and tight character writing. The packed chapter published in Meanwhile… #11 features Amazonian immigrant Jack and Strangehaven resident Meg, a forbidden love, and the discovery of a seaside murder that is sure to pique series fans.

Other currently running series includes Robert Langridge’s “Taniwha,” in which protagonist Kiri and her quick-witted dog Toby encounter a strange group of camping band members. The delightfully bizarre writing keeps the comic snappy and comedic, even as Kiri and Toby realize there’s more to the band than meets the eye. Meanwhile, the latest installment of “Gail Key’s Psychic Lost Item Helpline” by Ginny Skinner sees Gail trapped in a murderous predicament. Skinner’s control of the comic’s dark humor, flipping between the sheer bizarreness of the situation and the suspense of an impending murder, elicits both tension and hilarity.

The anthology also contains plenty of strong one-shot comics. One standout centers on an emotionally intense moment between schoolboys Aaron and Ben, the day after Aaron makes an irreversible, friendship-ending decision. The painstakingly detailed faces of both boys show the irreversible fallout of Aaron’s actions, packing an emotional gut-punch as their relationship splinters. A particularly touching entry is Mulele Jarvis’s “Elbis,” in which a jazz-loving cat dies but is given a new goal in the afterlife: to protect humans from isolation and mental destruction. Drawn in beautiful, inky brushstrokes, the comic communicates a heartfelt message: “Remember,” a cat tells Elbis, “sometimes all you need to do is be there.” Accordingly, the comic is a tale of recovery, presence, and connection that persist even throughout the darkest times of life.

A personal favorite was a short horror comic which can only be described as a tale of squirrels, stalking, and devouring intent. The art is distinctively unsettling: figures creep through the chalkboard-like night, interrupted by shocks of red ink splattered on the page. The grounded writing heightens the comic’s disconcerting atmosphere- there is nothing, after all, creepier than the mundane made murderous. Don’t skip this comic because it’s in French. The writing is easily translatable using online resources, and the comic itself captures the potential for darkness in the everyday remarkably well.

For veteran fans and new readers alike, the thirteen tales of Meanwhile… #11 contains plenty to laugh, cry, ponder on, reread, leaving readers eager for the next volume. In the meantime, new readers can pick up the previous ten editions of Meanwhile through Soaring Penguin Press and catch up on the stories of “Strangehaven,” Gail Key, and her detective agency, Kiri and Toby, and others. Regardless, Meanwhile… #11 is a delightfully diverse comic compilation and remains a strong anthology in its own right. For more information on Meanwhile… #11, be sure to check out the Kickstarter! Sound off in the comments, or send us your thoughts on Facebook or Twitter!