Home » Spider-Man: No Way Home is a Nostalgic Ride Through the Multiverse 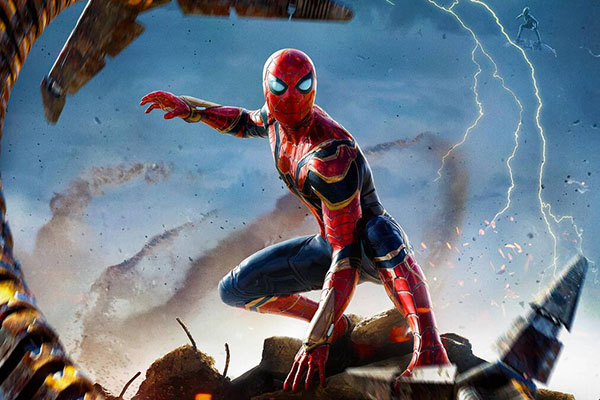 Spider-Man: No Way Home is a very difficult movie to review. Not because my opinions on it are mixed – they are absolutely positive – but because it is a particularly easy film to spoil.

So before I go any further, I am going to try to avoid major spoilers until the end of this review (and I will have a big bold warning) but if you don’t want to know anything at all about the film, stop here, go watch it, and then come back.

And to clarify – anything that was in the trailers and marketing I’m considering non-spoiler territory.

Okay. Now that that’s all out of the way, we can get started.

No Way Home picks up right where 2019’s Far From Home left off. It’s the summer after the Blip, and MJ and Peter have just returned to NYC from their European trip. Things finally seem to be going right for Peter, but we all know his Parker Luck won’t allow it to last long. J. Jonah Jameson outs Peter as Spider-Man, and things spin out of control almost instantly.

After months of his friends’ and family’s lives being thrown into disarray, Peter decides to seek out the help of Doctor Strange. Strange agrees to cast a spell to make everyone forget that Peter Parker is Spider-Man, but when Peter realises that means those close to him will also forget, he messes up the spell and that’s when things get a bit out of control. Instead of making people forget that he’s Spider-Man, the spell instead starts pulling in people from other universes who know that Peter Parker is Spider-Man.

As seen in the trailers, these multi-dimensional travellers are the villains from the previous Sony film franchises:

With these five villains all appearing at once, Spider-Man has his hands full working with his friends MJ and Ned to send them back to their home dimensions.

Holland has always brought real heart to the role of Peter Parker / Spider-Man and this outing is no exception. Peter goes on an incredible emotional journey over the course of the film, and Holland nails the most important beats. The fact that everyone knows he is Spider-Man gave the filmmakers an excuse to keep his mask off even more than usual, meaning we get to see his face more – and it pays off in the performance.

The rest of the cast are also on point this time around. Benedict Cumberbatch slips smoothly back into the abrasive Dr. Strange. Fortunately, the writers were clever enough to leave him out of a large chunk of the film so he doesn’t overshadow Spidey’s story. Similarly, Zendaya and Jacob Batalon return as MJ and Ned. Their chemistry with Holland other adds to the believability of their friendship and the trio feel real in a way Peter’s friendships in previous films never did (Harry Osborne in The Amazing Spider-Man 2 is a particularly noteworthy offender).

There are some other performances that are worth mentioning, but I’ll save those for spoilers.

In terms of action, the first act is a bit bare but as things ramp up, those hoping for some spectacular Spidey antics won’t be disappointed. Director Jon Watts has a great handle on the Spider-Man tone, mixing comedy into the action like a DJ spinning records. The fight between Spider-Man and Dr. Strange glimpsed in the trailers is particularly memorable. The climax, however, will have Spider-Man fans talking for decades to come.

Okay, that’s about all I can say without stepping into spoiler territory. I had a great time with the film and while it has its flaws, I think it pulled off something truly amazing. I would encourage any Spider-Man fan to go and see it, with a personal guarantee that you won’t be disappointed.

So again, spoilers ahead – you’ve been warned!

Seriously, stop reading if you don’t want to know.

The fanboy in me loved seeing the return of the classic Spider-Man villains. Alfred Molina in particular stands out, carrying the bulk of the second act on his robotic shoulders. All five seem to be having a great time, and the banter between them is classic MCU. However, their motivations are a bit weak, particularly after having two villains with rich backstories in the previous Holland Spider-Man films. They basically amount to “our powers are making us evil” and while there really isn’t time to go deeper, it is sadly noticeable.

Speaking of sad, one of the best performances in the film comes from one of the most unexpected moments. At the end of the second act, Osborne kills Aunt May. Marisa Tomei gives a heartbreaking speech to Peter as she bleeds out, quoting the famous words usually given to Uncle Ben: “With great power comes great responsibility.” While I think killing the character off was the right decision, as her arc was complete, it was still incredibly sad. The scene also pays homage to Tony Stark’s death in Endgame. It’s a moment that makes you realise how alone Peter really is.

But of course, Holland’s Peter Parker isn’t alone. The worst-kept secret in Hollywood was the return of former Spider-Men Tobey Maguire and Andrew Garfield. As someone who saw the original 2002 Spider-Man twice in two days on its opening weekend, you could say I was excited. The interactions between the three Peters is great. I particularly liked Holland and Garfield’s fascination with Maguire’s organic webbing. Seeing the three of them together on screen was everything the fanboy in me had ever hoped for.

That said, it’s hard to know how those fans that didn’t grow up with these other Spider-Man actors will react. The emotional impact for older fans like me was incalculable. But younger fans who don’t get all the references and allusions might feel like Holland is getting upstaged.

If you’d told me 20 years ago that we’d get to see three actors playing Spider-Man in a multi-franchise crossover film, I would have said you were insane. That it would never work. That Spider-Man 3 proved that the worst thing you can do in a Spider-Man film is crowd it with fanservice.

But you know what? They pulled it off. It was spectacular. It was amazing. It was the most memorable Spider-Man film I’ve seen. And I can’t wait to see what they do next!