Home » Romance And Racing In “Bullet” 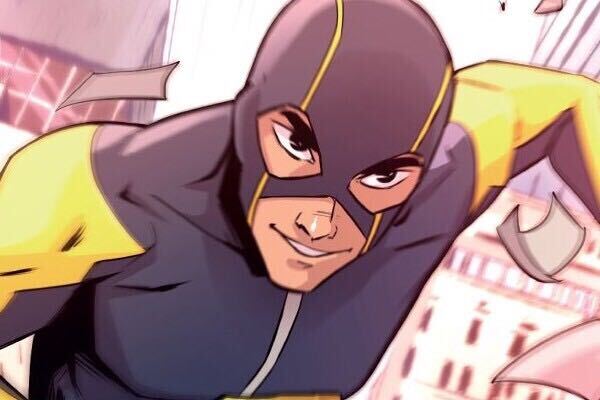 Bullet, written by Randy Stone and Jordan Alsaqa and drawn by Kath Lobo, is about the origins of the Silver Age-inspired superhero, Dale DeSouza—Bullet; like the Flash, he is a speedster. As such, he is capable of exceeding the sound barrier. The graphic novel begins with Dale as an old man looking back on his life. He thinks back on what has led him to take up crime fighting.

He first discovered his powers while working as a test subject at a lab during college. There, he also met his love interest, Johanna. Back then, she was studying to be a biologist. One of the first things he did as a hero was stop a bank robbery. Soon after that, Johanna expressed an interest in him. The credit for his superhero name goes to her. The preview for the comic ends with Dale in a suit speeding through the streets.

Retrospective narrative is an interesting technique. It grounds the character in a world that closely matches our own, and firmly embeds the story to the past. The focus on romance is also quite a fascinating choice; especially since superhero comic books are often defined by the action. Art wise, everything is in full color. It has a softer appearance compared to actual Silver Age comics. The close ups on character’s faces reveal luminous eyes. This is an attention to detail more in line with Bullet’s romantic tone.

Bullet seeks to re-contextualize comics, or at least to re-contextualize the era that it works within. True to its roots, this definitely feels more like an experimental story. Its’ one that is intent on playing with the genre. Romance has often been important to superhero stories. But it’s usually a means to create complications for the hero or to advance the plot. Romance is not often at the heart of a superhero story, and this departure from such traditions of the genre marks Bullet as something different.

If there is one area in which Bullet may struggle, it is that the setup lays out a story which seems very traditional in terms of the romance genre. Experimentation within the confines of romance is definitely possible. But this comic will have to work harder if it truly wants to be seen as something new. Nevertheless, the characters are interesting and the world that the comic sets up could help vitalize it.

Without the full story in front of me, I cannot say for sure whether Bullet lives up to the potential that its introduction hints at. Nevertheless, with the world of superhero comics open to it, I can hope that Bullet will tell its own story and prove that the small things in life can be just as important as saving the world.

Find more information on Bullet, checkout its Kickstarter. You can also purchase it in digital and print format! What kind of superhero romance would you want to see? Sound off in the comments or send us your thoughts on Facebook or Twitter!