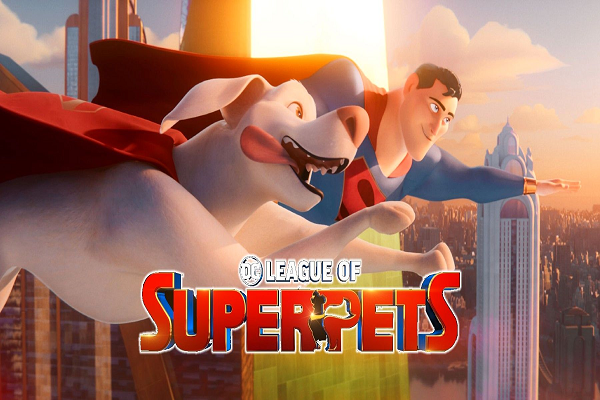 Happy 2022 everyone! We’ve got a lot of awesome superhero movies on the roster for this year. Morbius comes out later this month, Doctor Strange and the Multiverse of Madness is on the horizon, there’s the new Flash movie, and – DC League of Super-Pets? Right, okay, lets’ address the elephant in the room. What should we expect for this one, and what can we gleam from the trailer that was released back in November? Spoiler alert: you might want to skip this one.

What’s In The Trailer?

First off, feel free to check out the official trailer. You’ll find within the first few seconds that this is clearly a comedy film, and unlike most of the film roster for this year, it’s animated! I’m actually excited about that. Animated films have been doing super well recently, and I’m just a fan of animation in general. For what it’s worth, the trailer promises some great visuals, and everything looks fluid and lively. I’m also a huge fan of how colorful the world is; it’s something I sorely miss in live-action films nowadays.

But also within those first few seconds, you’ll probably recognize one of the voice actors. Krypto, Superman’s dog, is voiced by none other than Dwayne Johnson. Let me tell you, hearing his voice come out of a cute white dog wearing a matching Superman cape was a shock. But Johnson’s not the only celebrity on the cast. Kevin Hart plays Ace, another dog that Krypto recruits for the League, John Krasinski plays Superman, and Keanu Reeves is listed as… well, we don’t know yet. But he’s on the cast list, and that’s what matters.

Based on the trailer, the story’s pretty simple. Superman and the Justice League are all captured by Lex Luthor, and it’s up to Krypto and the other animals to save them. The animals he recruits all have superpowers. But unlike Krypto, they’re all from a shelter and aren’t associated with the Justice League yet. I’m assuming that each of the animals will get adopted by each remaining member of the Justice League. In previous versions of the comics, some of the select super-powered pets end up with Justice League heroes as their owners. It’s not too big of a stretch to make. That is, unless each of the animals are left to wander the world and wreak havoc unattended by the end of the film? That wouldn’t really be a good ending, in my opinion.

Is This A Must-Watch?

Long story short, I don’t think so. If you’re into DC superheroes for the lore and the action, I doubt you’ll find much to enjoy with this film. It’s clearly aimed at a younger audience and is a far cry from the gritty, live-action films we’ve been getting over the years. If you’ve got kids, though? I bet this would be a fun film for them. I also think there’s gonna be a lot of advertising and merchandise once the film comes out. C’mon, you can’t look at Krypto and tell me he wouldn’t make a cute plushie. The same goes for the entire animal cast, honestly. There’s no doubt in my mind that this film’s gonna be a cash-grabber.

But that’s not all. DC League of Super-Pets is also getting a video game based on the events of the film! Yep, that was announced during DC FanDome last August. Considering it has a spring 2022 release date, it’s clearly trying to feed off the inevitable excitement of the film’s release. The video game is titled DC League of Super-Pets: The Adventures of Krypto and Ace. Based on the sneak peek, it looks like a standard shooter game, with the player controlling Krypto and shooting down enemy machines. Ace doesn’t show up in this trailer, but it’s safe to assume we’ll see him at one point in the game.

There’s some lingering questions I have about the film, however. Sure, Krypto’s name is thematically in line with Superman. I mean, Superman’s from Krypton. But his ultimate weakness if kryptonite, right? Why would you risk naming your dog after your biggest weakness? And how does Clark Kent explain the name to his co-workers and friends? C’mon, Clark, you could’ve been a tad more original with that. And who’s Keanu Reeves gonna play in the film? Is he going to voice one of the Justice League heroes? Considering how we know Wonder Woman, Green Lantern, Batman, and Cyborg are set to appear, would it be a stretch to say he’ll voice one of the two latter characters? I guess we’ll have to wait and see.

Overall, while I don’t think this is a must-watch for the DC lovers out there, it could be a fun film for the family. It’s definitely geared towards a younger audience, the video game included. I’ll be interested to see the reviews once the film officially releases, that’s for sure. And if we see a Krypto plushie based on the film, you might also hear me laughing because I called it in advance.

DC League of Super-Pets will release on May 20th, 2022. Forty-five days after its theatrical release, the film will be streamed on HBO Max. The video game has no set release date aside from spring 2022. The current consoles it’ll be available on are the Playstation 4, Xbox One, PC, and on the Nintendo Switch.

Are you going to see DC: League of Super-Pets? Is this a film worth skipping, or are you in it for the laughs? Let us know in the comments or send us your thoughts on Twitter!