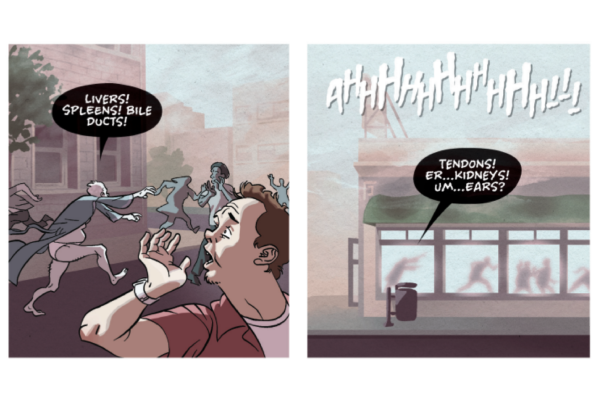 If you’re a fan of the horror genre, chances are you’ve probably experienced a zombie story or two. Never before have they been more sympathetic or seemingly docile as in Don’t Let Your Dead Ones Die. In this oneshot, writer Steve Thompson paints a surreal picture of recently undead illustrator Beck and her exploration of an afterlife of sorts. The story’s tone is suitably macabre with a dash of humour thrown into the mix as she tries to solve the mystery of her own death. And you thought you had a bad day…

Don’t Let Your Dead Ones Die is a very creative take on the genre. Pixar‘s Inside Out comes to mind among its influences, but here, it receives an edgier twist. Souls or essences of the undead can travel through the minds of their host bodies; linked like some sort of hive mind network. It’s an interesting concept, and one that connects seemingly separate scenes together. I like how the story plays with nonlinear narrative; it jumps between Beck’s journey and the characters who feature in the opening.

Speaking of which, I enjoy how the opening pages jump straight into establishing a surreal atmosphere. It’s clear that while this may look like our world, there are some important differences. The characters’ nonchalant reaction to the existence of zombies or “rejoovs” suggests this is just run-of-the-mill for them. It’s an effective narrative equivalent of the uncanny valley effect; something that is almost familiar to us but not quite right. It’s unsettling in a way that works well for the comic.

In terms of characterisation, Thompson humanises the undead, unlike many other portrayals. The story demonstrates this most clearly in the park scene. Beck sits on a bench gazing at birds, motionless and silent. Meanwhile, one of her roommates is callous and insensitive, insulting her as if she isn’t right next to him (in one form or another). If anything, he comes across as the monster, and it creates a lot of sympathy towards Beck for the reader.

Her journey is peppered with dry humour, bringing her personality to life despite her undead status. I particularly like her foray into controlling other bodies. She parodies cannibalistic stereotypes of zombies by yelling the names of body parts at strangers. Her humour also comes though in her comic-within-a-comic Tales Of The Tapir Knights which breaks the fourth wall during the introduction.

The artwork of Don’t Let Your Dead Ones Die compliments this tone very well. Its cover by Gavin Mitchell captures this element of parody and also reminds me of classic B Movie posters. It’s a great fit and a perfect introduction to the larger than life elements of the story.

Artist Noah Halton‘s visuals and Nathan Kempf‘s lettering are very strong throughout the comic. I really like the contrast between the colourful opening scenes with blue, orange and red tones and the introduction to Beck. When she first appears, the desaturated colour palette makes her appearance all the more lifeless and scary. Her face in the mirror is unnerving, with black bug-like eyes and sunken features. I like the way that she gradually moves to more colourful surroundings as the reader discovers more about her personality. The portrayal of Beck’s essence is simple but does the trick; a little white orb zooming around between host bodies. These scenes inside her head are suitably visceral, with cave-like walls in fleshy pinks and reds.

I’m not going to spoil where Beck’s journey ultimately takes her. But there is some great character design and off-the-wall dialogue towards its conclusion. Basically, it’s a great job across the board for the creative team of Don’t Let Your Dead Ones Die. While a relatively short story, it features some memorable visuals and a fresh twist on zombie behaviour. In fact, after reading this, I’d like to see the team tackle some other horror staples and put their own spin on them. As far as I’m concerned, the only thing rotten about this comic is the undead roaming the streets.

Are you partial to a tale of the undead? You can check out Don’t Let Your Dead Ones Die over at Buy Small Press. Sound off in the comments or send us your thoughts on Facebook or Twitter!