Home » Mask Up With “The Plague And Doctor Caim” 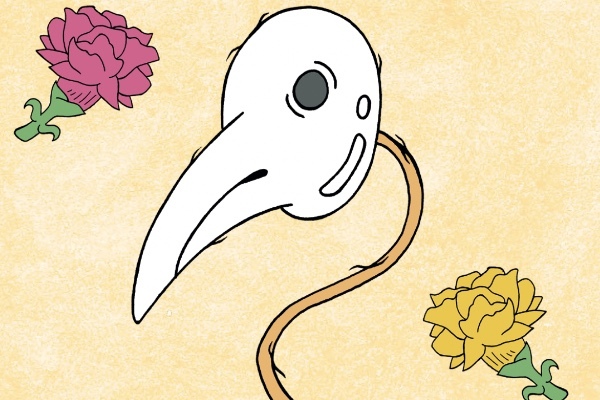 The Plague and Doctor Caim, written and illustrated by G.E. Gallas, is a story about the titular Doctor Caim; a simple and kindly plague doctor. Summoned to a village during an outbreak of the Black Death, he dons his plague mask, cowl and hat. He must try everything he knows to keep his patients and himself happy and healthy. This task, of course, proves to be quite difficult, even for the seemingly experienced doctor. Despite the inherent hopelessness of it all, Doctor Caim stays brave and persistent. He tries remedy after remedy, from bloodletting, leeches, herbs, and more, doing his best to save as many grateful citizens as he can against the odds.

Told in pages of 4 panels; each page or two in the comic play out a simple vignette in the day of the life of Doctor Caim. He marks the passage of time by the number of deaths he fails to prevent. Along the way,  he makes friends with some of the people he’s trying to save. A lot of the comic is slow and introspective, with musings on life and death. There’s also exploration of hope in the face of overwhelming darkness. It’s a slow, relaxing, funny and thought-provoking read.

Doctor Caim is largely unlike anything I’ve read, and yet feels somehow familiar. It reads a lot like a children’s book with short and direct dialogue, and lack of a driving plot. But it remains melancholic throughout and is incredibly charming. By the end of the book, I grew to adore Doctor Caim, and wanted nothing more than to see him succeed. Though it is certainly not the happiest of stories, it is one that kept me engaged. Despite how simple it may seem, this tragic story about a humble plague doctor was touching in many ways.

Of course, the book also connects to current events. A foreword by the creator describes the coincidence of how Doctor Caim was conceived before the global pandemic. Gallas, even if initially by accident, wrote a book that hits exceptionally close to home. It provides a story that speaks to a universal struggle for all of us over these past few years, as well as in centuries past.

The Plague and Doctor Caim can be purchased via Cast Iron Books! Would you trust a plague doctor to heal you? Well, at least they have cool-looking masks, right? Sound off in the comments or send us your thoughts on Facebook or Twitter!