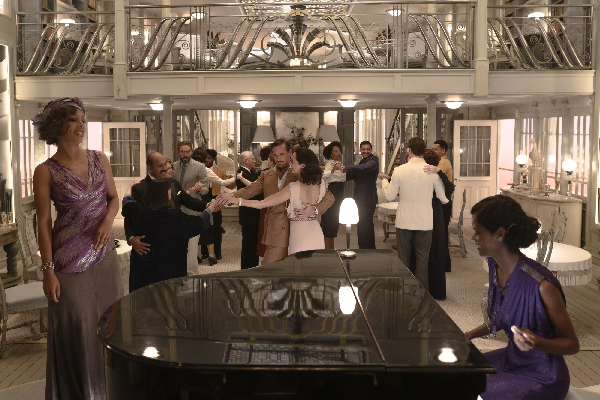 Whether you’re an Agatha Christie aficionado or just like to read, chances are you’ve heard of Death on the Nile.  This new adaptation follows director Kenneth Branagh‘s first entry in the series: Christie’s classic Murder on the Orient Express. Branagh is back on both sides of the camera, once again filling the shoes of Belgian detective Hercule Poirot. Released in February 2022, it’s been a long time coming, delayed by two years due to the pandemic. This isn’t the first time that Death on the Nile has been adapted for the screen. In fact, the 1978 version boasts cinema legends such as Dame Maggie Smith, Dame Angela Lansbury and legendary chewer of scenery; Bette Davis. Is this remake necessary? Probably not, but it’s my first experience of this Christie story. It’s enjoyable enough, but not essential viewing.

Death on the Nile‘s Screenwriter Michael Green is no stranger to established franchises. His work includes Logan, Alien: Covenant, and Blade Runner 2049.  Here, he retains the key ingredients of a good Christie mystery; we have the requisite tropes in abundance. There’s a group of strangers with grudges towards the main victim, flashback scenes and a dramatic gathering of the suspects. So far, so good.

Where Green and Branagh vary most from previous adaptations is their depiction of Poirot. I’m by no means an expert on the detective, but he is famously meticulous and typically stoic. This time around, the creative team allow him some moments of vulnerability, with insight into his past and personal life. Will it annoy Poirot purists? Potentially. Personally, I like this element, as it allows the audience to connect with him a little bit more.

So what’s Death on the Nile all about? In short, a couple’s honeymoon celebrations in Egypt are marred by the presence of jealous ex-lover and friend Jacqueline “Jackie” de Bellefort. Heiress Linnet Ridgeway (Gal Gadot) asks for Poirot’s help and protection from Jackie (Emma Mackey) who is stalking them on their trip. The wedding party board a steamboat named Karnak on the River Nile for a luxurious getaway. However, it isn’t long before members of the party are killed. It’s a solid premise by Christie, with nowhere to run for the passengers. Thankfully, they have the famous detective around to help.

Despite some unfortunate controversy around some of the cast since filming, Death on the Nile has a strong mix of actors. Among these, Academy Award-nominated actress Annette Bening teams up with British comedy legends Dawn French and Jennifer Saunders. It’s fun to see this transatlantic cast interacting. A personal favourite of mine is Sophie Okonedo as jazz singer Salome Otterbourne. No matter what I watch starring Okonedo, she always commits to her character and is a joy to watch. Whatever “it” is, she has it.

An element of the film that I find disappointing is its overreliance on CGI. The backgrounds during the boat scenes in particular are often distracting. As an old-fashioned story in a real-world setting, they detract from its believability. Production was originally planned to take place in Morocco, and it’s a real shame that it ended up being filmed in a UK studio. I’m sure that producers had their reasons, but it could have elevated the movie.

What’s the verdict then, monsieur? Branagh’s Death on the Nile is enjoyable enough, although I’m not sure I’ll go out of my way to watch it again soon. Despite its star-studded cast and some great performances, I don’t find that it’s entirely necessary. With recent hit mystery movies such as Rian Johnson‘s  Knives Out (2019), maybe it’s time to leave the classics alone and focus on something fresh.

Are you a fan of Agatha Christie? Do you like these modern adaptations? Sound off in the comments or send us your thoughts on Facebook or Twitter!