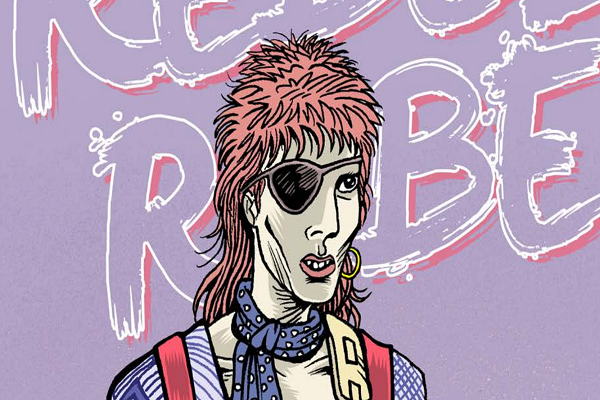 So here’s a fun fact: my family recently adopted a corgi puppy. We named him Bowie after one of my parents’ favorite artists, David Bowie. Even though I’m a hundred percent onboard with the name and reference, I don’t actually know all that much about Bowie or his life as an artist. What luck that REBEL REBEL: The Graphic Biography of David Bowie descended from the heavens for me to review! This is only the first chapter, but boy oh boy, there’s a lot of stuff to cover. If you’re familiar with Bowie’s life story, then none of what I mention will come as a surprise. But considering the biographical nature of this comic, I can’t exactly warn you about spoilers.

REBEL REBEL Chapter One comes in at a modest thirty six pages of content. As the full title says, it’s a detailed biography of Bowie’s life, especially his parents and childhood. One of the immediate standouts with this comic is that it doesn’t follow a standard format. Comic pages usually come in pictures and speech bubbles. But here, the images are solid blocks that only take up fifty percent of the page—sometimes even less. Above these panels are paragraphs that read like a biography, detailing events and people in Bowie’s life. The images act as supplements to these paragraphs; and they can’t tell the story on their own due to a lack of connection between them.

But the biography also features quotes from Bowie and his family, which are easily distinguishable by the change in font. The gritty art style feels like it fits the time period that Bowie grew up in. As a whole, the biography is pretty easy to follow; although the events can feel disconnected at times, it’s never a boring read. On top of everything, at the bottom of nearly every page, there’s a recommended song to listen to as you read. It’s like a soundtrack within a biography!

Despite being a Bowie biography, there’s a decent amount of attention placed on the world as a whole; it doesn’t just focus on Bowie’s upbringing. For instance, the beginning of the comic looks at World War 2. Halfway through, we take a dive into Bowie’s move to Bromley from Brixton. This section explores why Brixton itself wasn’t a suitable place to live in anymore. You might think all of the historical background makes this comic unbearable, right? At first, it can feel like that, especially with shoehorned little bits within the narrative. But every little detail ties into Bowie’s childhood and early life.

The war connects to his eventual service and denial of knighthood in 2000 and 2003. The move plays into his disconnect with his family when he was uprooted. Bromley becomes a paradise, not because it was an interesting place for him to live in, but because it was boring. Bowie set his imagination free and daydreamed about exciting sci-fi stories, which directly influenced his music. Even the brief interruption about Richard Penniman’s life directly relates to Bowie’s life. They were both similar people growing up with similar interests in music, saxophone and effeminate makeup and fashion. All of these are accentuated in the music choices at the bottom of each page. Some of the lines from the biography and Bowie’s own quotes are used as song and album titles.

Overall, REBEL REBEL is an entertaining combination of graphic novel and biography. It’s clear how much time the team put into making everything work. And although the overarching narrative sometimes suffers for it, the love is genuine. If you’re used to a lot of action in your comics, this one might not be for you. There’s a lot of reading, and you’ve got to pay attention to get a grip on the stories. Of course, if you’re a Bowie fan, you’ll love seeing just how his life inspired his music. Even if you’re not a fan, it’s still fascinating to read the trajectory of these huge stars as they carved their way in life. I patiently await Chapter Two – hopefully they’ll mention why Bowie has an eyepatch. Should I warn the family dog about that one? Nah, he’ll probably be fine.

What did you think of REBEL REBEL? Are you a David Bowie fan? If you are, what’s your favorite song/album from him? REBEL REBEL Chapter One is available on Amazon. It’s only available on Kindle, but it’s super cheap at just £2.99. A steal if you ask me! Let us know if you like it in the comments or send us your thoughts on Facebook or Twitter!