Home » What Can We Expect From “RWBY: Ice Queendom”? 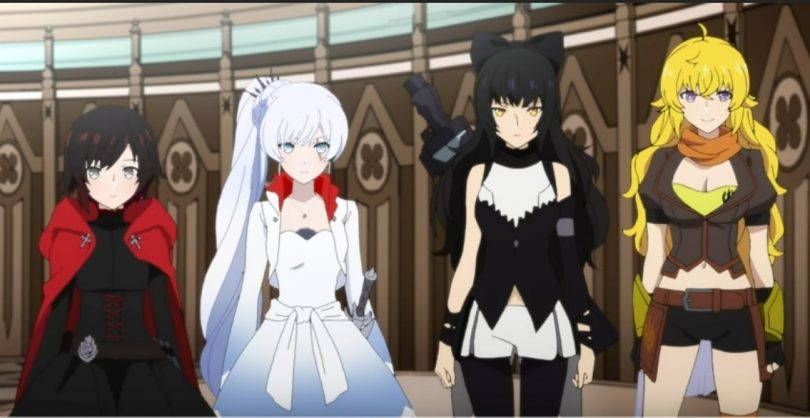 Well, this was certainly a delight to hear. RWBY drew inspiration from anime, and now coming full circle, Rooster Teeth’s signature series is actually now getting an anime adaptation! RWBY: Ice Queendom is due for release in 2022 in both English and Japanese dubs, featuring the original casts from the ongoing series. The anime will air on Crunchyroll in both languages.

The new series has quite the who’s who of anime filmmakers: Toshimasa Suzuki, director of The Prince of Smiles and Kenjirō Okada, director of March comes in like a lion, both serve as the main directors; Tow Ubukata, screenwriter and storyman of Ghost in the Shell: Arise and Psycho-Pass 2, as script supervisor and writer; Ryōhei “Huke” Fuke, character designer of Steins;Gate, created new designs for Team RWBY and Team JNPR; whilst Nobuhiro Sugiyama, character designer of Arakawa Under the Bridge, will serve as chief character animator; and even Gen Urobuchi, director of Puella Magi Madoka Magica, is helping to conceptualise the anime.

Cast wise, we will be seeing the return of both the established English cast, and the Japanese cast of the short lived dub. The cast includes:

Although the trailer appears to be selling a reboot of Volume One, there are hints that Ice Queendom may pursue an alternate story. Kind of like a What If? or alternate universe storyline. The key character arc depicts Team RWBY and Team JNPR in new, wintery outfits, though Weiss and Pyrrha stand out the most. Weiss’ militaristic outfit, complete with a hat and overcoat, implies she will be pursuing a different career path – and bares a striking resemblance to the outfit of the villainess Esdeath from Akane ga Kill.

The trailer is very Weiss-centric, particularly her sour relationship with Ruby during the first half of Volume One. In one scene, Weiss accuses Ruby of being unworthy to lead their team, considering her own hard work and privilege to train. Ruby responds by shouting that she hates Weiss, who appears to take this rather hard. She is later seen in a confrontation with Yang, who encourages her to speak her mind regarding Blake’s possible reveal as a Faunus, but Weiss argues that she doesn’t know how to react. Perhaps Weiss will increasingly isolate herself with her snobbery, having troubled relationships with just about everybody in Volume One, including Ruby, Jaune, and Blake.

The first piece of artwork released depicts Weiss in a new military uniform sitting in a throne marked with the Schnee family crest, with an army of Paladin mechs behind her. Rather than stick around to mature and become RWBY’s best character, Weiss may pack her bags and return to Atlas to pursue a military career like her older sister Winter. In RWBY, Weiss gradually abandons her “ice queen” shell to become a better person. The trailer ends with Weiss encountering her reflection, or possibly a variant, who could become the uniformed version seen in the artwork. Team RWBY and Team JNPR’s new clothes hint the cast will travel to Atlas. Ruby sports a skiing outfit, with Crescent Rose possibly being repurposed as a snowboard. Blake’s Faunus traits are on display, including a cat tail! Pyrrha – whose return is more than welcome – appears in a more regal gown, which resembles Weiss’ own outfit from Volumes Four to Six. Weiss’ relationship with her friends could be explored in new ways and alter their own character arcs.

The trailer depicts familiar scenes from Volume One, including Ruby battling Roman Torchwick’s goons, the Emerald Forest trials, and Weiss’ duel against a Boarbatusk. The animation, especially the briefest glimpses of battle sequences, are extraordinary and magical. RWBY’s initial draw was its incredible, choreographed fight scenes, which proved to creator Monty Oum’s defining signature. It is fantastic to see the talented staff behind the anime to bring Oum’s style to life in 2D animation.

However, what of RWBY Volume 9? We can speculate on when it will be released, but its delay was intentional, as the Covid pandemic took its toll on Rooser Teeth’s staff over two years. It made sense to lengthen the production of the upcoming volume to give the animators more leeway and time to create the franchise’s next season. Regardless, RWBY: Ice Queendom is certainly a promising new addition to the growing franchise. Stay tuned for reviews once it comes out.

Are you looking forward to RWBY: Ice Queendom? What do you think will happen and which characters do you wish to see appear? Leave a comment below, or on our Twitter feed.