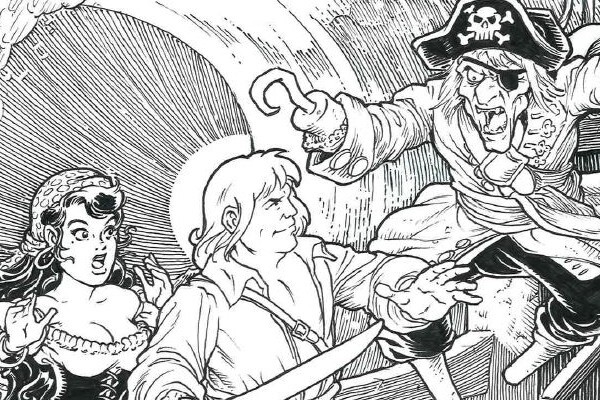 Tilney – also called The Salacious Slaughter of the Sea, or Salty Seductions of the Salacious Seas, depending on which title you as the reader like best – is written by David Doub and illustrated by Pat Binder. Along with her companion Lord Harwood; Miss Tilney is a reporter trying to get to the bottom of the mysterious happenings in the town of Polperro. Together, the two of them uncover a wrongdoing that goes back decades. This story involves creatures from myths, along with wicked men. There are an abundance of rather fantastical beings, including selkies – sea creatures with the ability to shape shift from seals into humans. So far, #1 is too short and leaves many questions unanswered.

The art style is a cartoonish black and white. Color might have added a splash of something more invigorating into the story, but the achromatic palette still does its job very well. Writing wise, Tilney doesn’t let the story get too overcomplicated. In a way, this is very refreshing. Often times, stories can reach to find a deeper meaning, forgetting that they first and foremost must tell a compelling narrative. I do not think that a story has to be complex in order to be interesting. Which is why Tilney, despite its simplicity, still tells of a compelling tale.

The characters are also very intriguing; Miss Tilney and Lord Harwood especially seem to extend past #1. Their little nuances and quirks make perfect sense. This issue also does something very unique; throughout the story, Gaelic words show up at the bottom of the panels – an element that is used very well. Sometimes, stories use motifs poorly which makes them difficult to understand. Luckily, for this story in particular, containing this narrative means that it makes good use of everything that shows up throughout it.

Tilney does suffer a bit narratively. Because of the contained narrative, the characters do not get much background. This makes it difficult to understand exactly what is going on and why the reader should care about the characters. I’m sure that this is not a problem in the grand scheme of this series as opposed to the small fraction of it that I read. Instead, it’s longer and might take the time to establish the characters and the plot before diving into the story. However, for this particular section, not having a larger plot does somewhat detract from the narrative.

All of that said, the story works very well overall. The rest of the comic is sure to be just as compelling as this small piece has been for me.

What sort of mythological creatures do you want to see next? Want to read more of Tilney? It’s now available on Amazon. Tell us in the comments what you think of it, and be sure to check out our Facebook and Twitter!