Home » Escape To The Cosmos In “Beyond The Beyond” #1 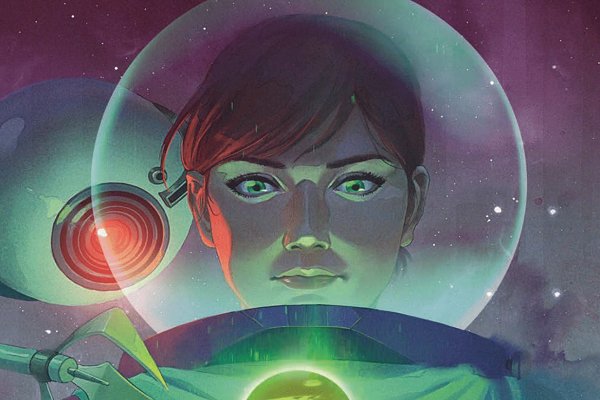 It’s not hard to be enamored by astronomy as a kid. There’s something so enticing about space, you know? I can’t help but think about all of the possibilities beyond our solar system. I really hope that one day, we’re able to explore the cosmos and possibly find some new planets. Which is exactly the reality that Beyond the Beyond #1 takes place in. From planetary mining expeditions to black holes – the dangers of space exploration truly come to light!

Beyond the Beyond #1 is thirty-two page long, with full lines, color, and graphics. We mainly follow Nova Vega, an aspiring young explorer who strives to be like her astronaut parents. She and her older brother/caretaker Sirius – who has more practical goals – both reside in a planet controlled by Omni Corporation. This should immediately set off some alarm bells; Omni sounds like something borne out of evil, especially in modern days. As the planet is a mining colony, Nova enrols into a mining academy to seemingly follow in Sirius’s footsteps. But that’s not what she wants, and she makes that well-known to anyone and everyone around her. Kicked out of her class and after a fight with Sirius, Nova escapes via rocket to the cosmos, intent on finding out what truly happened to her missing parents.

#1 does a wonderful job of setting up characters, backstory, and questions for the future. We also get a potential villain in Omni’s founder and current leader, Sergey Page. He never appears in-person; he only ever shows himself to Nova and Sirius’s parents as a hologram in both past and present. At first, he seems to be quite young when talking to Nova’s parents. But he looks exactly the same in present-day too. During an interview, his interviewer hints at something that may foreshadow the future of the series; are his goals to expand outwards into the universe rooted in a desire for immortality?

One of the obvious plot points in Beyond the Beyond is the mystery of Nova’s parents. We actually get to see them for a few pages in the very beginning. I would have thought the entire comic is about them if not for their ship exploding. This actually ties back to my theory on Sergey being the not-so-secret villain. Something about his interactions with Nova’s parents seem off to me, like he is hiding information from them. The robot that eventually destroys their ship also concerns me; it looks similar to the Eyebots in Nova and Sirius’ home. But why would Sergey and Omni have reason to destroy that specific ship? What information did Nova’s parents give him back then that resulted in their disappearance?

I’m not alone in these speculations, that’s for sure. Nova’s curiosity and her love for her parents drive her for the majority of the graphic novel. She cries when Sirius says they’re not coming back, and she still has her mother’s first spacesuit. There’s something about her parents’ disappearance that feels wrong and she wants nothing more than to get to the bottom of it. The story given to her and her brother about their parents’ demise is that a black hole sucked them in. But the first few pages tell us that’s all a lie!

Overall, Beyond the Beyond #1 is a wonderful space adventure with gripping stakes and an endearing protagonist. The art style and colors are all superb and really hook me into this world – or rather, into this universe. It’s not much of a stretch to call this story a black hole—it’s easy to get sucked in from the very first page! I recommend this to anyone looking for a good adventure and is partial to space exploration. Truly, this is the start of something amazing!

What did you think of Beyond the Beyond #1? Why did Omni cover up the disappearance of Nova’s parents? Are you rooting for Nova as much as I am? Beyond the Beyond #1 is available to purchase over at Scout Comics. There are also Beyond the Beyond posters, an alternative web-exclusive cover, a sweatshirt and a unisex T-Shirt available. Scout Comics also has tons of other titles and merchandise so be sure to check them out! And if you’re really interested in the #2 of Beyond the Beyond, it’s currently slated for a June 2022 release. Tell us if you plan on getting your own copy over on Instagram or Twitter!