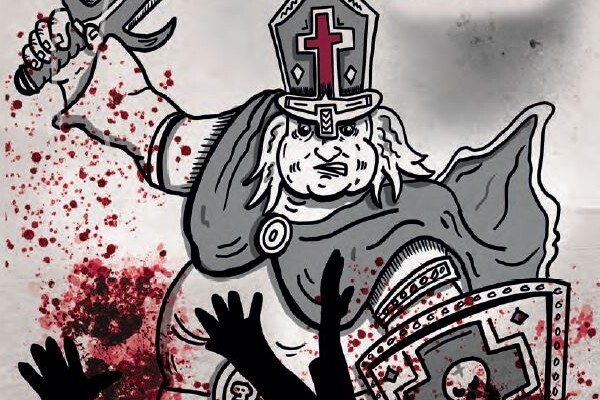 Apparitions of East Anglia, written and drawn by Chris Spalton, is not so much a comic as a loose collection of ghost stories, tall tales and historical accounts. The story is steeped in Spalton’s personal experiences with the history and stories of East Anglia. He grew up there, and the mythology and culture of this area are very important to him. Through this book, he explores the effects of stories, which extend far past the world as we know it – all the way to the very land itself. The roots of East Anglia become just as important as the people who populate it. Despite the lack of continuity to this book, each of the tales do bear some similarities. Extreme acts of violence mark most of them, and they often end with ghosts of some kind.

A couple stand out as extremely odd, such as the ‘Beaver Bishop of Babingley’. This one is about exactly what it says it’s about. Another is about ‘Seahenge’, a parallel monument to Stonehenge with a similarly unknown purpose. Another interesting one is the tale of the hermit ‘St. Guthlag’, who once lived in solitude. A curious one tells the story of ‘Tiddy Munn’; the leader of an impish folk who used to live in harmony with the fen people. Another talks of the ‘Toadmen’, a strange group that tamed wild stallions through bizarre means. Perhaps the most conventional is the story of ‘Tom Hickathrift’. He is a man of large size and strength who once fought an ogre. People hailed him as a hero, and it feels like one of the more folkloric ones.

One of the most famous stories in this collection is surely the ‘Wild Hunt’, renowned throughout the world for their chilling properties.  The actual story told here does seem to vary from the stock story spoken about these ghostly horsemen. While this method of storytelling certainly has interesting implications structurally, it does suffer a bit. The disjointedness does not engage the reader quite as much as a continuous narrative would. The tales also suffer from being somewhat repetitive. Aside from the ones mentioned above, most of them are standard ghost stories. Some of them are folkloric, though the historical aspect is much more important. The retelling loses focus at times, a result of how much Spalton tries to do within the text. But everything all works out in the end.

Interspersed throughout the text and drawings are photos Spalton took of the areas which he discusses. This shows just how tangible these stories are; despite the interlude of hundreds of years which have passed between then and now. Setting the book up this way both enlarges and contracts the space. It seems that so much has happened in such a small section of England. The reader must remember these stories take place over a long period of time, and that many more legends exist that do not receive a mention. Spalton pulls together the influence of the land upon the people and the stories they tell. He crafts a story that speaks to how the land shapes humanity as much as humanity shapes the land.

Do you have any ghost stories? If interested in all the lore that can be read in Apparitions of East Anglia, you can purchase the full novel over on Etsy. Be sure to let us know any of your own historical ghost stories in the comments below, or hit us up on Facebook or Twitter!