Home » “Afro Samurai” Takes An Eye For An Eye 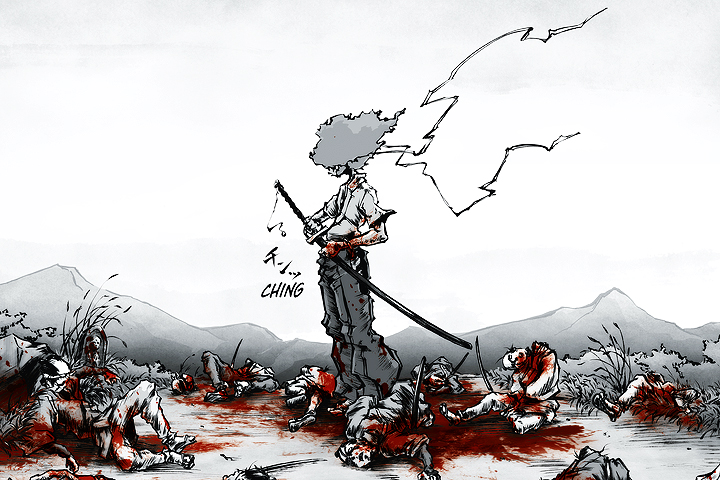 It’s easy to see why Afro Samurai by Takahashi Okazaki is a huge hit in the Western world. With the perfect harmony between American and Japanese styles, this two-volume seinen manga series scratches just the right spot in every gore enthusiast all over the globe – both with its plotline and art style. Originally serialized as a doujinshi from 1999 to 2000, the manga’s popularity has reached unimaginable heights. It even has its own anime mini-series, a video game adaptation, and a live action in the following years. Both the manga and anime have received prestigious awards left and right, including two Emmy nominations.

Afro Samurai centers around—well—the Afro Samurai. He is the son of Rokutaro – the late No. 1 – and was a witness to the death of his father at the hands of the then No. 2, Justice. In the eyes of everyone, it was an inevitable death. In this world, whoever wears the No. 1 headband is said to have strength on par with the gods. While the No. 1 bathes in the privilege of only being challenged by the No. 2 wearer, the latter battles anyone and everyone that stands in their way. The last man standing always takes the title. Considering this, it just makes sense that whoever wears the No. 2 band desires only one thing – the No. 1’s death.

But to a small child who has mostly only seen the good in the world, this concept is a villain’s awakening. Ever since his father’s death, the Afro Samurai only lives to kill Justice, the current No. 1. He inherited his father’s immense strength and swordsmanship, and it doesn’t take long before he obtains the No. 2 title. Driven by nothing but bloodlust and hatred; the Afro Samurai, now No. 2, travels the land and seas searching for the No. 1’s hideout.

Naturally, with great power comes great responsibility. Not only a sumptuous prey for power-hungry samurais, he’s also the most wanted killer for numerous notorious groups. This includes the Empty Seven—quintuplet monks that spearhead all assassins worldwide. At this point, the Afro Samurai walks on a 50/50 lifeline. There are assassins eyeing his every move and waiting to strike. Despite this, is he going to make it? Most especially, when he needs to get past the Empty Seven’s hideout before he gets to where he needs to be? Let’s leave that for you to figure out.

Power, resentment, and revenge are dominant themes in Afro Samurai. Running on a very straightforward, often predictable plot; the graphic novel is set in feudal Japan, much like Samurai X and Dororo. I’d say it lacks a few plot twists. But this is definitely a gem for those who aren’t very fond of complicated plots. The art makes up for this gap, though. Okazaki has a unique and graphic art style that suits the storyline very well. The battles, the wounds, the decapitated heads – all of them vividly drawn and uncensored. The comic runs on black and white panels with occasional blood red splashes in fight scenes, which look incredible. Some scenes do get a bit blurred out though, so it can take a few seconds longer to figure out.

Another thing that I love about Afro Samurai is that the protagonist is NOT portrayed as a hero. In fact, he shows little to no remorse for people he killed. It’s almost to the point where he can use them as a human shield if needs be—dead or alive. This might sound a bit weird, but I think this is a breath of fresh air from the righteous hero stereotype. However, I do think the protagonist could use a name and more traits than just being a killing machine, though. But all in all, as someone who is a sucker for good art and gore, Afro Samurai is a ride I will remember. I just honestly hoped it had been longer!

Looking for an action-filled manga that you can finish over the weekend? Can you stomach gore like a pro? If yes, then this is your sign to get a copy of Afro Samurai on Titan Comics now! Let us know your favorite scenes on Facebook or Twitter!