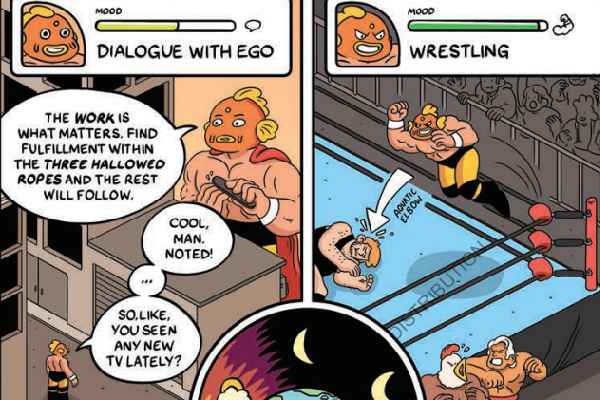 In the world of wrestling; egos, choreography and colourful costumes clash. The crowds cheer on their favourite fighters as they leap, swing and dive across the ring. It’s all one big show for the audience! But what happens when the cameras stop rolling? What goes on behind the on-screen feuds and the bravado? Writer and artist Josh Hicks takes us backstage to meet an eclectic group of fighters in Glorious Wrestling Alliance.

I must say, it’s a lot of fun. Hicks introduces us to star player Great Carp right off the bat. He’s a typically muscular wrestler in all senses but one; he has the head of a fish. It’s the equivalent of a big flashing neon sign saying: prepare yourself, things are about to get strange! His castmates include wrestlers such as Los Bros Hermanos and Satan’s Children. I love the way that Hicks labels and introduces them. Each have humorous taglines that communicate a lot in just a few select words. It’s almost cinematic in a way; kind of like that scene in Mean Girls where Janis and Damian introduces Cady to all of the high school cliques.

Hicks explores the realities of backstage life, where insecurities can come knocking regardless of how many trophies you win. Alongside the career pressures of Great Carp, we follow the machinations of Glorious Wrestling Alliance CEO Ricky Lovett Jr. That, and his desperate attempts to keep his father’s company running successfully. This element of familial responsibility also adds a touch of gravitas among the larger than life characters. Another highlight is the journey of female wrestler Miranda Fury; she takes matters into her own hands to get the recognition she deserves. The story touches upon aspects such as the gender pay gap, with Fury’s clear talent highlighting the hypocrisy of such structures. These elements add depth to the comic and make the characters more relatable.

All of the plot lines charge on, punctuated by brilliant fictional commercials for action figures and games. All of these relate to the Glorious Wrestling Alliance in one form or another. It’s a smart choice which helps to bring the in-comic universe to life. A personal highlight of mine is the Eau de Carp fragrance ad. It’s so silly, but the absolute perfect branding for the star wrestler. I also love The Sims-esque mood tracking meter that Hicks uses for Great Carp. In general, there’s a lot of other game-style references throughout the comic, such as signature moves used as part of conversations. They break the fourth wall and further enriches to the comic.

I also really love the use of humour here. At times, the characters are incisive or self-deprecating. The line, “I inherited a name and a hairline and nothing else,” really makes me chuckle. Another highlight is the printed message of Ricky Lovett Sr. for his son in a rare moment of communication. “You’re a real colossal disappointment,” is truly mean, but Hicks uses it in a funny way.

What makes Glorious Wrestling Alliance even better is the artwork. Hicks creates a vibrant world that I want to see animated. The visual style of the comic is both distinctive and engaging. It uses the previously mentioned elements – such as adverts and mood charts – to help keep the visual flow interesting. Other aspects such as extracts from texts, online reviews and even a newspaper front pages further add to this appeal. My personal highlight is during in the third chapter; Hicks uses a simple contrast of black, white and yellow. This combination really illustrates heavy rain across multiple panels, bringing the atmosphere to life.

So, what’s the final score for the Glorious Wrestling Alliance? As far as I’m concerned, it’s a knockout. The beauty of a good story can be bittersweet. It’s a great sign when you finish something and you wish it never ends; but that you’re also satisfied with how it ends. That’s how I feel after reading this graphic novel. I feel like I’m absorbed into its world and rooting for its characters to succeed. If you love humour, engaging dialogue and lively artwork, definitely check out Glorious Wrestling Alliance.

Are you a fan of stories that go behind the scenes of the entertainment world? Into the likes of WWE and AEW shoot fighting? You can find Glorious Wrestling Alliance over at Amazon or Barnes and Noble. Tell us all about your own crazy wrestling misadventures on Facebook and Twitter. Don’t forget to comment down below!