Home » “FOUND:” #1: In Conversation With Anthony Mullins And Mastefka 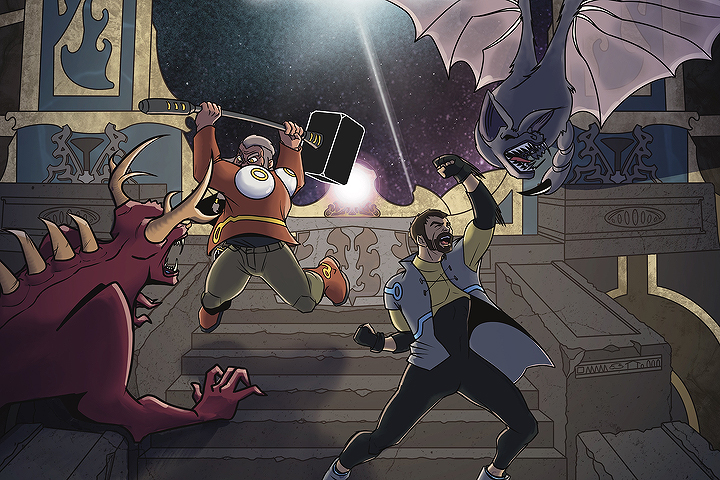 A space adventure with a hardened version of everyone’s favorite father/son dynamic; FOUND: is a story that journeys through sci-fi and fantasy, following main character Dugan. Anthony Mullins is the brilliant mind behind the Daily X-Men Facts account on Twitter. He writes the comic alongside his roommate Mastefka who draws the art. Heavily inspired by Dungeons and Dragons in both writing and character designs; FOUND: pulls inspiration from varied forms of media and twists them into something fresh and new. We talked to both writer and artist to give their Kickstarter for FOUND: one last push to its end goal!

Tell us about FOUND: — what it’s about and what kind of things readers should expect from it?

FOUND: is a space fantasy story structured around the concepts of body, mind, and soul. [Of] finding yourself in each of these ways. You’ll meet characters dealing with their identity and/or some form of destiny, and their individual journeys intersect in ways that reshape their lives and the FOUND: universe as a whole. Readers can expect a lot of drama and mystery rolled up into a lot of chaotic action scenarios. We’ve got magic, corruption, manipulation, psychics, constructs, mystical items, and spaceships. All kinds of fantasy and sci-fi elements mash together to define the universe of FOUND:.

It’s a mission statement of ours to represent dynamic individuals with diverse backgrounds. [To] give them the spotlight that they deserve. We won’t be giving one queer character their little one-issue romance and call their arc complete. We’ll be digging much deeper than that in the pages of FOUND:. Queer people are more than just their queerness; every character represents more than just their gender or sex.

What inspired the creation of this story?

Somewhere along all of our time spent together, we began to create a universe to tell stories that we wanted to see more of. About the things that matter to us – and it flourished from there! We kept this playground to ourselves for so long and then started getting really excited about sharing it with other people. The pandemic gave us a chance to hone in on our creative efforts and figure out how to effectively go about getting this story in your hands.

Our interests are expansive across all forms of media and genres. FOUND: pulls from a handful of the things that inspire us most and push our creativity. A lot of the core aspects of our world and characters are influenced by Dungeons and Dragons (fun fact: a majority of our characters are named after D&D characters that we or our friends have played). Cowboy Bebop, X-Men and SAGA all help inspire how we approach dynamics of strangers coming together and how they structure society.

You guys are roommates, is that correct? How did the collaboration for this comic start? Was that before or after rooming together?

We are roommates, allies, partners—all of the above. If we had to pinpoint it, we’d have to land somewhere between “partners in crime” and “spiritual companions”. We initially spent a lot of time just hanging out and being nerds together. [We] then became roommates, then co-workers at various jobs across the years. Having extensive pre-existing work history definitely improves our efficiency in handling the back-and-forth of the creative process. Living together has taught us to work well together, and working together has taught us to live well together.

Speaking of collaborating together, why do you think your writing style – Anthony – goes so well with your art style, Mastefka?

Similar inspirations, standards, and perspectives draw both of us in. We really enjoy breaking down our visions to each other and working through the evolution of a scene. Also, we are basically in constant collaboration due to our relationship. [This] tends to push us to look outside of ourselves and encourage both individual and mutual elevation. We like to think that that shows in our art as well. We’re also both very excitable nerds. So, it’s easy to just have fun anytime playing in the world of FOUND:.

There’s a magical space hammer in this one. Tell us about that.

Classic Fantasy stories and Dwarven relationships to precious metals like Mythril influenced our hammer; such as creating our own take on what [all that] would look like within the world of FOUND:. Mythril is often a symbol of Dwarven society and in our world. There is a Wielder of the Mythril Hammer that acts as a ward over Mythril and representative of Dwarven ideology. At the beginning of FOUND:, this hammer goes missing. But unfortunately, it does not fly back to its wielder when summoned. To be honest, we like to think that the Mythril Hammer is a great representation of our intent to take more classic fantasy concepts and morph them into a space/sci-fi setting.

Speaking of Marvel, Anthony – you used to run the Daily X-Men Facts account on Twitter. What prompted you to make that transition into creating your own comic?

Daily X-Men Facts will forever be pivotal in my experience with social media! X-Twitter is a wildly passionate and beautifully queer place to reside. I was able to make a lot of connections with other X-Men fans. Even a few creators at the time! That gave me a boost of confidence and encouraged me to push my creativity. I always had an inkling that comics were the medium that I am meant to tell stories through. Being so hands-on with such a passionate community helped shape the way that I wanted to approach storytelling. [It] helped form my opinions on what kinds of stories deserve more of a spotlight.

There’s been a rise of mentor/mentee and father figure relationships in media; from Peter Parker and Tony Stark in the MCU, Deku and All Might in My Hero Academia, and Bruce Wayne’s relationships with his many Robins. Why do you think this is so and does that factor into how you approached the dynamics in FOUND:?

Mastefka: I feel like socially, we’re at a cool point of acknowledging that within any generation, we are all made up of good and flaws. Classically, characters like Gandalf, Dumbledore, Obi-Wan—they all appear to be the most sagely and wizened characters of their respective stories. It’s more interesting for us now to know about the mentor’s troubled backstory too and to have these more complex characters grow and change into the teacher we want them to be. Don’t get me wrong, Dumbledore had a messy past!

Anthony: I think that there has been a rise in this type of dynamic because it’s one that’s relatable, easy to identify, and easily understood. However, that tends to lead to the main protagonists all having common threads in their personalities and journeys. Additionally, these protagonists tend to be young. In FOUND:, we’re dealing with a dead mentor and an adult mentee. We’re years beyond that journey of growth that we’re used to seeing in these types of stories. Additionally, in real life, it isn’t always this sagely, wizened character like Mastefka mentioned that teaches us something. The relationship(s) of mentor/mentee will shift at times in FOUND: to reflect some of those more maybe unexpected, or less often shown, dynamics.

You mentioned “Found Family” when welcoming backers into your comic. Is that a play on the “found family” trope, and should we expect bits of that in the future of FOUND:?

As FOUND: progresses, the title will take on various grand and specific contexts. The future of FOUND: is riddled with bits about “found family”! At its core, FOUND: is about people exploring their identities and who they are, and the influences that change them along the way.

Oftentimes, the “found family” trope can be so systematic in the way that the group revolves around one main protagonist or in the way that it can feel like it’s just about building a collection of cool characters. We aim to push past that and really highlight these relationships in a way that is more dynamic and impactful to every character and the journey that they are on. “Found family” isn’t just about finding each other; it’s also about finding yourself. In our personal experiences, we are proudly shaped by the people that we choose to call family. We want to tell stories that better represent that idea.

So, yes, it is a play on the “found family” trope. But the colon at the end of the title indicates the openness of what each individual character finds on their journey. In turn, hopefully something that every reader finds some kind of relatability in. Also, Daern’s full name is Daern Found – and it all starts with him.

Mastefka, can you share your thought process for creating the character designs of this graphic novel?

My designs for the characters are rooted in classic fantasy. Something you might imagine from a D&D campaign. I worked out what I thought their D&D Class might be, then I applied some sci-fi elements. I still wanted them to all accessible and “streetwear”-minded. The characters are people foremost, and they’ll have layers of evolution that I want to reflect on as their journeys progresses. Take Dugan for example. I’d consider him something between a Monk and a Fighter. His design is meant to reflect that while showing a bit of a minimal look from the little he had growing up on Thru. His jacket has lines and circles; a Dwarven cultural design in our universe. This is representative of his time with Daern.

Tell us a little bit about FOUND: Radio and what role does that play in the overall story and process of FOUND:?

Music is a huge part of our lives and is constantly playing in the background at our house. In particular, during our creative work. We’ve made many playlists that represent a lot of the “vibe” of FOUND:. Through time, a lot of these songs have ended up playing a major role in the creation of our story. FOUND: Radio is on all of the main platforms and we’ll be adding three new songs to the playlist with every issue.

FOUND: Radio is a special art piece that will be in each issue that lets us have some extra fun with our characters by taking them outside of their tense situations, and in turn a chance to showcase these songs and add a little extra “oomph” to the reading experience. Artists like HDSN, I. JORDAN, Mega Drive, Indira Paganotto, MoMa Ready – just to name a few – have inspired us far too much for us to not give them the shoutout that they deserve.

Interested in this new space fantasy world and want to read it for yourself? Well then, you can find out more about FOUND: on its Kickstarter page here! Be sure to check-out Anthony Mullins and Mastefka on Twitter to keep up to date. If you like it and want to find more up and coming comics that need backing, be sure to follow us on Twitter or give us a shout on Instagram!