Home » “Longpig #1” Is A Modern Tale Of Creepy Cannibals 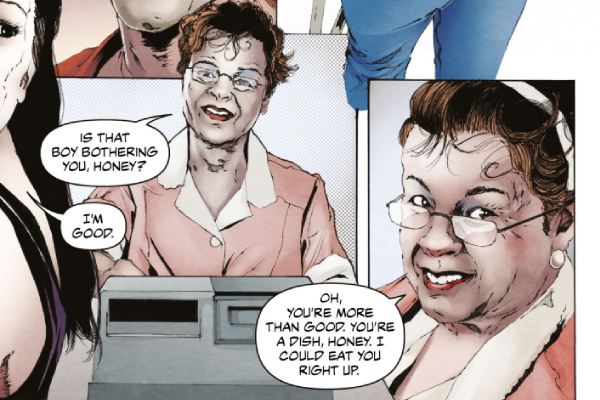 Monsters don’t always live in forests or caves; as a matter of fact, some of them live in houses! One of the oldest groups conceal a taboo that you might have heard of in folklore – in the distant island tales of the past. With Longpig #1, they descend upon the surface of suburbia; hiding in plain sight, filling up their shopping trolley, walking down the street. If a stranger asks you over for dinner, then make sure it’s not you that’s on the menu!

In Longpig #1, writer Grayham Puttock introduces us to a very modern take on cannibalism. He plays on a classic idea that gets under your skin; we really don’t know what other humans are capable of behind closed doors. Puttock cleverly uses lines that are seemingly innocuous, but creepy in the context of this story. A supermarket cashier remarks, “You’re a dish, honey. I could eat you right up”. What makes this extra genius is that she doesn’t know she’s saying this to an actual cannibal. I like this blend of comedy and horror, which is more often than not a winning combination.

Puttock subverts the typical gender dynamics of the horror genre in the opening pages of the comic. Initially, we see a man pestering a woman – later referred to as Beet – as she does her food shopping. By the end of their conversation, however, we realise she is someone to be feared. Let’s just say that she stores more than groceries in the boot of her car. It’s an interesting change from the common horror opening that focus on women as victims.

The way that Beet and her family discuss their actions is disturbing. In their eyes, abducting someone to eat is merely “a business trip”. Beet tells her dad that they’re “loading up the last one” about someone’s body. It’s as simple as lifting up boxes of things on moving day. Creepy and effective; Puttock tells us a lot about these characters in the short space of time through this conversation.

Longpig #1 has an interesting shift in the story. Artist Adam Jakes and colourist Aljoša Tomić use visual conventions of crime stories in the introduction to Mr. Longest. He’s an imposing figure with a black suit and a hat that partially obscures his face. He’s reminiscent of figures such as Kingpin or The Penguin at first glance. Puttock deftly builds a solid picture of the character within pages. I like the old trope of not asking questions unless asked. This establishes Mr. Longest as a man of power and reputation. We first see him taking what appears to be some sort of heart medication. I’m curious to see how this may factor into the future plot of the series – same with his intention to kill the family of cannibals.

On the topic of visuals; Jakes and Tomić along with letterer Ken Reynolds and designer Andy Bloor provide a strong counterpart to the plot of Longpig. The artwork has a very distinctive feel to it. The character poses feel true to life, and the angles used during conversations almost take you into the room. In some panels, it’s unnerving; very similar to the way we can experience the uncanny valley effect from animation. However, it’s a good choice and highlights a sense that something about these people is simmering beneath the surface.

One of my favourite visual moments take place at the very start of the story. Among a row of colourful cereal boxes, we get the cheekily named “Eat Me’s”, complete with an animalistic gaping mouth. It’s a smart choice and a splash of dark humour on the page. There’s also a memorable and disturbing moment with a partially concealed naked body in the van. It’s eerily similar to the way butchers transport meat.

There’s also some creative layout choices that I enjoy, such as splitting a page with a wall of rising flames. Another involves a telescope protruding from a car window which aligns with a rounded panel of the lens. They help the comic to stand out and have it’s own distinctive visual feel. The front cover is another visual highlight. It’s striking, with the signature red and black of the horror genre among its scheme. Between the animal skulls, the intimidating figure with the baseball bat and the person screaming; it all builds up a sinister atmosphere from the offset.

Overall, I find Longpig #1 as a great start to this story of creepy cannibals. It has moments of humour seeded throughout while also managing to be unsettling and macabre. I’m intrigued to see if Mr. Longest manages to catch the family and put their twisted operation to a halt. I also want to see more of the youngest member Peardrop; is she actually involved with the family “business”? On a side note, I love the insight into the creation of the comic at the end of this issue! Hopefully this will be a recurring feature.

Can you stomach your comics with a side of horror? If you’re up for the challenge, you can checkout all things Longpig #1 on its Kickstarter page. Tell us some of your favorite horror stories leading up to this Halloween on Facebook or Twitter!