Home » Green Lantern: Back to Basics

June 17th was one of the blackest nights for Green Lantern fans as the new film failed to reach the same heights as the other Superhero Films this summer. Many critics are attributing Green Lantern’s low box office and poor reviews to the fact that GL is not a well known character, a ineffective marketing strategy, and the fact that the movie includes a bit more than was necessary from the Green Lantern universe. In addition to these faults, however, I was struck by the fact that most of the negative aspects of the film came from how closely the story stuck to the classic Superhero Origin structure I outlined back in February. 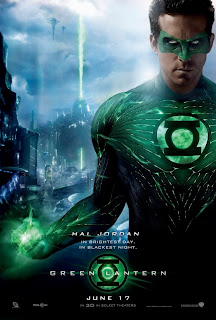 Ever since the rules of the genre were established in Spider-Man, virtually every Superhero Origin Film that has come since has found ways to break the mold. Batman Begins’ flashback structure, for instance, or more recently, Thor’s use of the Sequel structure in an Origin story. Green Lantern, on the other hand, felt almost exactly like Spider-Man, and quite literally hit every beat in the book. Protagonist initially presented as an unlikely candidate to become a superhero? Check. Hero and villain acquire powers through the same event? Check. Hero learns to master these new powers as he deal with the death of his father? Check. Hero is in love with a Damsel he has known since childhood? Check. Hero faces off with the Villain and debuts his new identity to the public? Check. Villain kidnaps the Damsel? Check. Hero defeats Villain? Of course. Hero leaves the Damsel in the end? Oh yeah.

This is the first Superhero Film since Spider-Man that hasn’t needed any poking or prodding or compromising to make it fit into this paradigm. And it is exactly this perfection that makes the movie so much less interesting than it could have been. When someone sets out to make a genre film, their goal should be to make something that takes what has already been produced in that genre and create something that builds on the tropes and conventions of that genre. We’ve seen what’s come before; we want to know what’s going to happen next. In my reviews of Thor and X-Men: First Class, my greatest praise was reserved for the things that these films did differently from Superhero Films of the previous decade. These movies made me excited and hopeful that the genre was capable of evolving and that in the future we would see a whole new kind of superhero on the big screen. But apparently it’s only Marvel that’s picked up on this fact and everyone over at DC and WB is still stuck on the old formula. I’ll be the first to admit that it doesn’t look like Captain America: The First Avenger will break the mold much either, however, so I could be wrong.

So I guess it comes down to this: is Green Lantern’s failure a sign that the Supehero Genre has gone as far as it can go or does the success of Thor and X-Men: First Class mean that there is still hope?