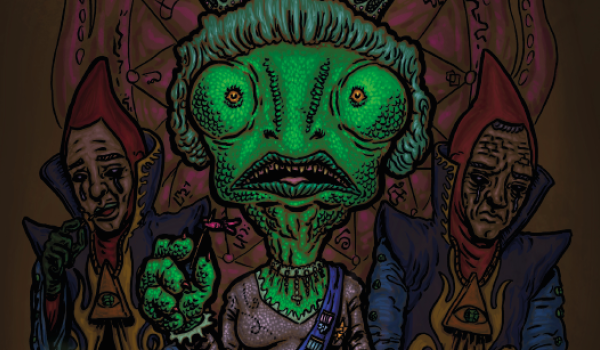 After my review of the first two issues, I’ve been waiting to review the newest instalment in The Vale, Brett Uren‘s twisted, otherwordly take on the society, politics, and economics of  modern-day Buckinghamshire. Having previously described it as “social realism meets H.P. Lovecraft“, I was excited to see where Brett would take us next – not just to High Wycombe as opposed to Aylesbury, but in terms of what more he’d uncover within this dark mirror of our own world. Sadly, while many of the same problems still remain with the comic, the issues with characterization are becoming more obvious.

Its front cover may be arresting – Queen Elizabeth II as a chameleon, tiara and all, flanked on either side by henchmen emblazoned with the All-Seeing Eye – but The Vale Issue 3 is too casual in how it treats the highly original world in which it’s set. Odd jobs and trips to the pub may have held the attention in the first two issues, but the focus on the barely different quasi-mundane does the premise little justice. There’s a great story here involving the Elder Gods and mankind’s liberation, but so far the series has become too caught up in light parody, e.g. a powerful, wealthy family named the Wrathschilds.

Main characters, black-eyed Jan and squid-faced Shugg, are simply not dynamic enough to propel the story forward, and when something dramatic happens in its final moments, it feels out of character for the perpetrator, as if he/we shouldn’t have yet reached that point. Brett’s black-and-white ink drawings are still impressively detailed and separate plot strands involving the demonisation of hoodied youff and the plight of a cursed chugger are both intriguing, though as yet unconnected to the primary action. Nevertheless, the series is only just now beginning to pick up steam and nowhere close to meeting its full potential.

I really want to like The Vale. During my interview with him, Brett expressed so clearly and eloquently his vision for the series – by way of CERN, Terry Pratchett, and the Bermuda Triangle – that I couldn’t help but be enamored. Even so, there’s too much time here spent off-point, too much small talk and too many diversions, which just feels like a shame given the sandbox Brett has built for the purposes of this tale. Still, there’s plenty of humor and personality here and a lot to be said for a leisurely stroll through the recognizable, myth-heavy world that’s been constructed over the last three issues.