Home » INTERVIEW: Michael Jan Friedman Exclusive on His Latest Novel, I Am The Salamander 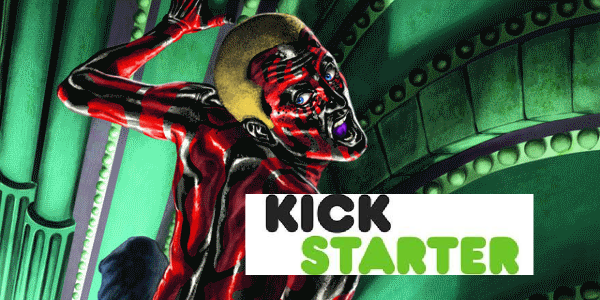 This week we were delighted to welcome prolific author Michael Jan Friedman to the Cape-Cave, to hang his mantle by the fire, sit down for a nice cup of tea, and have a good old chin-wag.

Topics included his writing career; his latest venture, I Am The Salamander; and how Kickstarter is changing the way authors reach their audience. 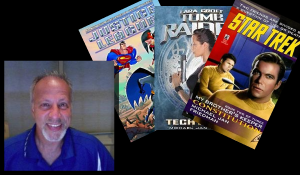 I grew up in Bayside, New York City (in Queens) to parents who actually encouraged me to read comic books. Went to Martin Van Buren HS, U of Penn undergrad, Syracuse (Newhouse School) for grad school in journalism. I now live in Port Washington on Long Island with my wife, our two boys having left the nest.

What made you first start writing?

It’s not like I had a choice. It was a compulsion, undiluted by a string of early rejection slips when I became an adult. I couldn’t think of any higher calling than to be a storyteller because it was storytellers who gave me the greatest joy as a kid. Since my first book was published by Warner in 1985, I’ve written a total of 70 of them, the vast majority for major publishers like Random House and Simon and Schuster. Many of them were Star Trek books of one kind or another. Ten were superhero novels but I was playing with someone else’s characters; in I Am The Salamander, I’m creating my first original superhero novel.

I Am The Salamander is a novel about Tim Cruz, a teenager who beats cancer but has a hard time re-adjusting to everyday life. Then, as if that’s not hard enough, he starts taking on the characteristics of a human salamander. One of my touchstones in writing this book was Fantastic Four #1, in which we see four people turning into bizarre, super-powered beings. But they’re not thrilled about it, at least at first. They’re horrified. What if I burn to death? What if I can never turn visible again? Will I be a pile of orange rocks forever? These are the kinds of questions that have to be going through their minds. In I Am The Salamander, protagonist Tim Cruz has much the same reaction. He’s not exhilarated by his powers. He’s horrified by them, especially in light of the physiological challenges he’s just undergone.

Sounds like a strange choice, I know. I started out thinking about popular characters like Batman and Spider-Man, who are based on really yucky things, and asked myself which yucky things hadn’t been used yet. The answer came up “Salamander.” I was delighted, actually, because that presented a challenge. What kinds of powers could a Salamander possibly have? Well, as it turns out, he has some really cool ones.

What inspired you to write a story involving cancer?

I didn’t start out with that premise at all. Furthest thing from my mind, actually. But the more I learned about salamanders, the more certain I became that Tim Cruz had to be a cancer survivor. I can’t say too much more about it, because that would ruin one of the bigger plot points, but it came out of my research. And my father died from pancreatic cancer, so making my hero a cancer survivor seemed like a way to honor my dad as well.

The story is for young adults, but has a serious subtext. Did you set out to do this, or did it emerge naturally from the idea of the Salamander?

As I note above, it emerged naturally. Unfortunately, young adults get cancer too. I Am The Salamander is a way of acknowledging that reality. These kids need all the hope they can get, and hope is what superheroes do best.

What rewards are available for supporters?

When I was coming up with the reward matrix, I asked myself what I would like to have. An e-book, maybe? A print copy of the book? Sure. Definitely a limited edition, signed print of the cover art, which was supplied by a really amazing, up-and-coming Brazilian artist named Caio Cacau. He’s already gathering a following so a limited edition print with his signature may turn out to be a great investment. On the literary side, I included the possibility of an acknowledgment in the book and even the chance to name a character after oneself or a loved one. I haven’t gone into detail yet on the Kickstarter site as to stretch goals, but I want to thoroughly reward every donor so I’ll be announcing them little by little. Hint: at least one will have to do with other books I’ve written.

Why self publish this book?

The publishing landscape has changed and is continuing to change. Twenty years ago, I could have sold this book to a publisher without any trouble at all. Now publishers have to go down the middle of the road with every book they put out. Their profit margins are so thin they can’t take a chance on anything out of the ordinary. And even when they do, it stays on the shelves for a few months and then gets pulled in favor of a newer title. In that sense, books have assumed the shelf life of magazines.

The advantages to the writer are many. For one thing, he can write what he loves, without worrying about whether a book store buyer will find a place in his store for it or know how to merchandise it. For another, the writer can make the book available to his readers forever, not just for the few months most new books spend on the shelves. The writer can also control the quality of the book in terms of paper and printing, to make the best package possible, and keep the costs down because there is no middle man in the equation.

The advantage to the reader is the chance to read more adventurous work, the kind of thing traditional publishers have to shy away from these days. Without the independent writer/publisher, that quirky, offbeat material is nowhere to be found.

It’s for precisely these reasons that I co-founded Crazy 8 Press, an alternative publisher of mainly science fiction and fantasy, along with several other established writers. You can sample what we’ve written at our website, Crazy8Press.com.

What’s your experience of Kickstarter been?

Exciting and nerve-wracking at the same time. I’m doing all I can to reach the people I think will enjoy I Am The Salamander, but that 30-day deadline looms larger and larger with each passing day.

Describe I Am The Salamander in three words.

“Don’t freak out.” Those are the first three words in the book and I think they capture the feeling of it. Tim Cruz doesn’t feel like a superhero. He feels like a freak.

What book(s) are you reading right now?

The Game of My Life by Dan Paisner. It’s the story of another unusual teenager, but it’s a true story rather than a fictional one.

Which literary author has inspired you the most?

Probably Ray Bradbury. I don’t think anything I’ve ever read can top the best of his short stories. No one is more evocative than Bradbury. No one has a better way with words. You don’t really read his stories. They bypass the brain and go straight to the heart.

Good question. Probably Justice League #21-22 from back in 1963. Before that, I was only vaguely aware that there had been superheroes before the Silver Age generation I cut my teeth on. I’d met the Golden Age Flash previously, but that was it, and it was a wondrous experience to see the Golden Age Green Lantern, Atom, Hourman, Starman, etc. in action.

Clooney as Batman or Affleck as Daredevil?

Affleck (if we’re talking better, not worse). I actually didn’t think he was bad in Daredevil at all.

And with those last words ringing in my ears, the interview was over, and Michael returned from whence he came. Thanks to Michael for taking the time to chat. You can check out the Kickstarter here.

Sam Roads is a writer, entrepreneur, musician and game designer. He trained as a composer at UWCC, owns four gaming businesses, and has won two international Origins awards for game development. He lives in Cardiff with his wife Lizz.